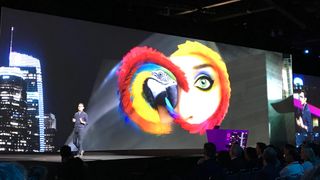 Adobe MAX 2018 is in full swing, and boy, the software giant is certainly making an impression. Day one, waking into the South Hall of the LA convention centre, it’s hard to describe the scale of Adobe Max 2018. Approximately 15,000 seats, all filled with expectant creatives waiting to hear exactly what Adobe has been working on for the past 12 months is quite a sight.

To start proceedings, a truly jaw-dropping keynote session, where Adobe leads took to the stage to reveal all. Adobe CEO Shantanu Narayen got the party going, telling an almost 20,000-strong audience: “Design has never been more important and we’re living a golden age of creativity.”

The reigns were then handed over to Adobe Chief Product Officer Scott Belsky, who shared the stage with Adobe product leads and special guests, including Phil Schillier and Lilly Singh, to reveal all the latest Adobe innovation.

The latest news from Adobe MAX 2018

Photoshop CC comes to the iPad

Photoshop CC will soon be coming to the iPad, meaning that users will be able to make all the edits they’re used to on desktop on the go. The new Photoshop will have all the core tools of Photoshop CC, but will be optimised for touch devices, making the most of gestures, and the Pencil, with a new user interface designed especially for the iPad. It will also sync across devices, so you’ll be able to switch between working on desktop/iPad with ease. At the moment we don’t know exactly when Photoshop for iPad will take off, so watch this space for more news.

And the award for presentation that blows our minds went to... Project Aero. Adobe has been working on its AR software for a while now, but today the company took augmented reality to a new level, wowing the audience with some truly jaw-dropping demonstrations.

"AR is the next breakthrough medium for creative storytelling," said Adobe senior product manager Zorana Gee, as she walked through Project Aero's capabilities. We weren't surprised when the Adobe Max 2018 crowd went wild for Project Aero, but it's something you really have to see to believe, so we'll leave this just here...

Project Gemini is a dedicated painting and drawing app for the iPad that makes full use of Photoshop's powerful painting engine. Packed with intuitive features that capture the feeling of working with traditional art tools, Project Gemini allows users to mix paints just like in real life, experiment with exclusive brushes, and make the most of a multi-screen mode.

Digital artists can also sync Project Gemini with Photoshop on the desktop, allowing for a seamless transfer of files. Adobe has put Project Gemini through rigorous testing with professional artists to ensure that the drawing and painting tools are as true to life as possible.

Adobe XD has become the first and only UX/UI platform to enable designers to create prototypes for voice-activated devices. New voice trigger and speech playback capabilities enable designers to move seamlessly between voice and screen prototyping: users can now add voice triggers that launch particular interactions (in the same way a tap or click would), while speech playback unlocks a powerful text-to-speech engine. As voice starts to play an increasingly important role in our digital experiences, XD now offers a way for users to design and share prototypes that extend beyond the screen.

Adobe's long-awaited video editing app, dubbed Project Rush, has finally been released. The newly christened Premiere Rush CC promises an intuitive, all-in-one experience that will make it easier than ever to create professional-looking video content (even if you're not a video expert yourself). It's currently only available on iOS, though.

Photoshop CC gets the Sensei treatment

Alongside some long-awaited minor updates, Photoshop CC sees the addition of some seriously impressive new tools, Adobe Sensei selection tool being one of them.  In just one click, this tool automatically detects the object you want to select and does all the hard work for you. If this works as well as today's demonstration showed, this really could be a game-changer for Photoshop users.

Day two of Adobe MAX 2018 saw some of the world's creative leaders take to the main stage. In an almost two-hour session, comic artist Nicola Scott, American percussionist Questlove, YouTuber Lilly Singh and world-renowned director Ron Howard shared their stories to creative success. Here's what they had to say...

First to the main stage was inspirational Australian comic book artist Nicola Scott, who quickly warmed up the audience with an all-too-familiar story of how creative success did not come easy. Having first wanted to be an actor, and that not working out, Scott decided to see how her other creative talents could serve her.

"It was one Sunday morning, when I reformed the question, that it hit me," she said. "Instead of asking what can I do with drawing, I asked what do I want to draw. And that's when I thought, oh my god, I want to draw Wonder Woman and that could be my job! Twenty minutes later, I was in a comic book store and that started my education."

Scott went to do many illustration projects, slowly building a body of work, always with the goal that one day DC comics - home of Wonder Woman - would come calling. Having never previously had a plan or strategy when it came to her career, Scott was determined to make DC her goal, and, by reworking her strategy after every project with DC in mind, she finally got that call and the rest, as they say, is history.

Named one of the 20 most influential photographers in the world, Albert Watson followed Nicola Scott with one of the most enthralling, engaging and funny talks we've seen so far. Watson took time to cover some of his truly fascinating 50-year career, including how he found Alfred Hitchcock 'beyond fabulous' and what it was like to photograph some of the most famous people in the world.

Watson also went on to offer young photographers some expert advice. "A common weakness among young photographers is lack of planning, and being reliant on Photoshop to fix their images at a later date," he said. "The soul of the picture has to be when you press the button. It's absolutely essential that the creative force is piled on to what you want that image to be, so you should always have the idea first."

Following Nicola Scott was American percussionist Questlove and YouTuber Lilly Sigh, interviewed by Adobe principal worldwide evangelist Jason Levine. In the short time they had on stage, both offered two super-useful pieces of advice to creatives.

"The most important part of creativity is boredom," Questlove claims. "Allow yourself to have silence and be bored. Take at least two days off a month, sit in your pyjamas with no phone and let boredom hit you so inspiration can come."

"Dwanye (The Rock) Johnson is the perfect example of breaking barriers and creating a path," Lilly Singh added. "He said 'When I was wrestling, everyone said, you can’t act'. He taught me you have to buck tradition. If I you want to be the girl who goes from YouTube to movies, then I can do that."

The crowd erupted when legendary Hollywood director Ron Howard came on to the stage for the last half hour. A truly humble man, Howard explained his love for storytelling and fascination for true stories, before going on to share stories on what it was like working in the film industry for the past 60 years.

Our favourite anecdote has got to be when he explained how when working with a 70-something Bette Davis as a 24-year-old director, having the confidence to actual direct his leading lady was quite intimidating, especially when she wouldn't call him by his first name. "I'll call you Ron when I've decided I like you," he said she told him. It was only after he asked her to rework a scene that turned out better that she did, indeed, call him - and gave him a cheeky slap on the ass.  “The greats outwork everybody - and they don’t stop work at age 75,” Howard said.

But the best piece of advice from the morning came from Howard as he said to the audience: "Someone has to help you understand early on that your creativity has value. You're not wasting your time dreaming."