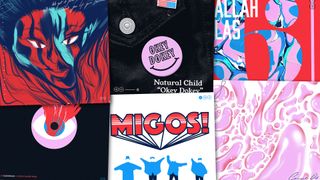 It's that time again, when otherwise reasonable people decide that they absolutely have to pick their top ten albums of the year. It's harmless fun that you can always enliven by making up a band and album and dropping them in around number seven, citing their obscurity and lack of social media presence as proof of their authenticity. Try it!

Richard Perez and Eric R. Mortensen's approach to festive top tens is even better than that, though. Every year they get together a crop of designers, illustrators and artists to not only count down their favourite albums of the year, but also to reimagine their cover art within a fixed colour system.

For this year's 10x16 there's a bumper crop of designers taking part; 19 of them, including top names such as Jessica Hische, Shawna X and Adam R. Garcia.

And among the albums selected this year are The Avalanches' Wildflower, Anohni's Helplessness, M83's Junk and Lizzo's Coconut Oil, with a whole lot more besides.

The countdown isn't complete yet; at the time of writing it's up to number three, where you'll find delights such as Kanye West's Life of Pablo, Regina Spektor's Remember Us To Life and Chance the Rapper's Coloring Book. Numbers two and one will be revealed over the next couple of days.

It's a great way not only to see a lot of fantastic artwork – once this year's countdown is over it'll amount to 190 reinvented album covers – but also to discover some excellent music that you might have missed if, for example, you've spent 2016 listening to nothing but the Hamilton cast recording.

And it's all packaged up in a swish responsive site built by Joey Maese, with a background that smoothly cycles through this year's colours, and embedded songs so that you can get a taste of every featured artist.