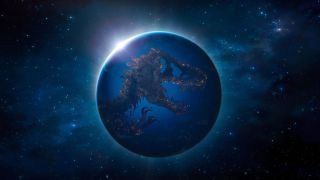 The build up to the next Jurassic World movie kicked off recently as a brand-new short film related to the franchise dropped on YouTube. Titled Battle at Big Rock, the short film is packed with special effects that stand alongside the best 3D movies. But it also contains a frankly genius piece of logo redesign.

Don't worry, Jurassic Park's iconic T-Rex skeleton logo, dubbed Logosaurus by fans, hasn't been replaced. However if you look closely, you'll see that it's found its way into the Universal Pictures logo.

We've all seen the Universal Pictures logo so often that it's easy to glaze over and take it for granted. You know the score, the logo sees planet Earth slowly turning through space as the word 'Universal' wraps around it. Lovely.

If you look closely though, you'll see that Earth's land masses have been changed to resemble the beloved Jurassic Park logo. Take a look at it in action by watching Battle at Big Rock below:

According to Battle at Big Rock's YouTube description description: "The short takes place one year after the events of the last Jurassic World film in Big Rock National Park, where dinosaurs are now living in our world. The story follows a family of four whose encounter with these wild animals becomes a terrifying fight for survival."

Director Colin Trevorrow took to Twitter to share his thanks following the enthusiastic reaction from fans. And in his tweet, we get to see a clearer version of the modified Universal Pictures logo with the colours boosted.

Up early in the UK, reading all these #BattleAtBigRock reactions from America. Thank you all so much. pic.twitter.com/PV3CZFhN1LSeptember 16, 2019

We can see where one Twitter user was coming from when they pointed out that it would've been more consistent to use landmasses from the Jurassic period, but come on, a planet-sized T Rex skeleton looks much cooler. Also, it literally ties into the name of the film: Jurassic World!

As far as extra touches go, this is a brilliant bit of design that helps build the hype for Jurassic World III. The film is due to be released on 11 June 2021.