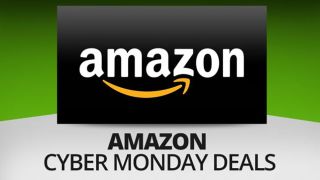 To make the most of these offers, we’d recommend signing up for Amazon Prime, if you’re not a member already. This gives you access to Amazon's Lightning deals 30 minutes earlier than everyone else. If you don't want to commit to Prime, you can sign up for a free 30-day trial – just make sure you cancel the trial before the 30-day limit. Scroll down for our pick of the best Amazon Cyber Monday 2018 deals.

Bose QuietComfort 25 noise cancelling headphones: $109.99
Save $190: Amazon has knocked a massive 63% off these wired, around-ear headphones from Bose. These noise-cancelling headphones are designed for use with Apple devices, and are less than half price. One of the very best Amazon Cyber Monday deals we've seen.View Deal

Acer R240HY 23.8" widescreen monitor: $179 $99
45% off: This HD widescreen monitor from Acer has been knocked down by over $80. It's a Cyber Monday Deal of the Day, so the clock is ticking if you want to claim this offer. It's extremely well-reviewed on Amazon, so well worth a look.
View Deal

Fire TV Stick: $24.99 (was $39.99)
Save $15: Turn any screen into a Smart TV with this super-affordable streaming stick. This sweet Amazon Cyber Monday deal makes it even more tempting. Or, if you want two (Christmas gift, anyone?) you can pick them both up for just $39.99.
View Deal

Fire TV Stick 4K: $34 (was $49)
Save $15: Start streaming 4K media with this powerful 4K streaming stick, and save $15 in the process. A new Wi-Fi antenna design is optimised for 4K Ultra HD streaming, and you'll get more storage for apps and games than any other 4K streaming media stick.

How to get the best Amazon Cyber Monday deals

Aside from bookmarking this page, if you’re serious about bagging a bargain this Black Friday and Cyber Monday, you'll need an Amazon Prime subscription. One of the key benefits is that you'll get access to Amazon's Lightening deals 30 minutes earlier than everyone else, giving you a better chance of success.

Lightning Deals are time-sensitive promotions that last until the deal expires or the available stock runs out. Amazon launched extra Lightning Deals every day leading up to and over the Black Friday weekend last year – the best ones can start and end in minutes, so those extra 30 minutes are often invaluable.

Prime membership will set you back $12.99/£7.99 per month ($6.49 if you're a student) or $119/£79 annually. But if you're not a Prime subscriber already and don't want to commit, you can sign up for a free 30-day Amazon Prime trial and you'll be eligible for Lightening deals (as well as all the other Prime benefits). You can then cancel any time within that 30 days with no strings attached. Just don’t sign up yet – wait until 1st November.

Get a free 30-day Amazon Prime trial
Get early access to Lightening deals over Black Friday and Cyber Monday – plus free delivery, super-fast shipping, thousands of free movies and TV shows, and all the other Prime benefits – with a free Amazon Prime trial. Make sure you sign up after 1 November 2018 to benefit over Black Friday and Cyber Monday.View Deal

To give you an idea of the sort of discounts we’re expecting this year, here’s a selection of some of the best savings we saw last year – and the good news is we saw similar price cuts over Prime Day this summer.

While we can’t promise that we’ll see these deals again, this information should help you make a better judgement call now as to whether a deal is worth grabbing.

Microsoft Surface Book – $1547 (was $2699)
Save $1151: When the Surface Book 2 came out last summer, Amazon slashed the cost of Microsoft’s first-ever 2-in-1 laptop. There were a few different specced models in the Amazon Black Friday sale: this was one of the beefier versions, and the price was cut by over $1,000, bringing it down to just over $1,500.

Wacom Cintiq Pro 13" – £764.99 (usually £899.99)
Save £135: We spotted the smaller 13-inch Cintiq Pro graphics tablet on sale lsat year. It came with a 3-month Creative Cloud subscription thrown in, making it a deal worth having if you were happy with the smaller drawing area.

GoPro Hero5 – £338.99 (usually £494.97)
Save £154: GoPro's Hero5 is an extremely powerful action camera offering smooth 4K video, a user-friendly touchscreen interface and voice activation. Amazon has knocked down the price today, so you can pick it up – along with a rechargeable battery and three-way arm – for just £338.99.

Looking for something specific? Here are the best Amazon Black Friday and Cyber Monday prices on our favourite gear for designers, illustrators and artists...

We’ll be working around the clock to curate all the best Amazon Black Friday and Cyber Monday deals for designers, artists and creatives on this page. We don’t know how good this year’s discounts will be - but we can tell you that our expects will be picking through all Amazon’s offerings and posting only the best-value deals here. So bookmark this page and check back in November.