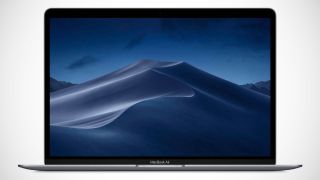 Black Friday's still the best part of a month away, but retailers are starting to get itchy feet. With so much competition for your spending money, many stores have realised that they can't depend so much on making their traditionally massive sales over the Black Friday weekend, and they're shunting their deals out earlier and earlier to beat the rush.

What that means is that the bargains are going to be arriving thick and fast over the next few weeks, and here's one that's hard to ignore if you're after the best Black Friday MacBook deals: up to 10 per cent off a brand new MacBook Air at Amazon, Currys and John Lewis.

This is the shiny new 2019 model that's only just gone on sale, so being able to grab a deal this sweet is particularly unexpected. The best saving to be had is on the 13.3-inch model with a Core i5, 8GB RAM and 128GB SSD in Space Grey – that's currently available for £985, getting you 10 per cent off the usual retail price of £1,099. There are smaller discounts to be had on the Silver and Gold models, but unless you're especially dead set on a particular colour we reckon Space Grey's the way to go.

For anyone after a lightweight laptop that's perfect for most design jobs, the MacBook Air's a pretty good choice. It might not have the punch of the MacBook Pro, and with 8GB of RAM you're likely to see heavyweight apps struggle at times, but for day-to-day creative work it'll see you right, and it's wonderfully portable, weighing in at just 1.25kg, and 15.6mm thick.

We're not sure how long these MacBook Air deals will last – Amazon was reporting limited numbers on the 256GB model in Gold last time we looked – so we'd advise snapping these up if you have a hankering for an early Apple bargain this year. And check below for other MacBook Air deals.