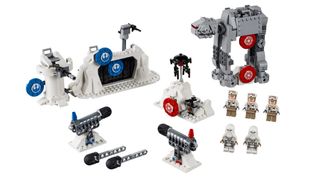 With it being Star Wars-themed May the 4th today, we're excited to announce that there's some great Star Wars LEGO deals from the titan of tiny brick-based building, including the amazing animated Droid Commander set. But the sale ends midnight tonight!

With lockdown in full force, we could all do with a bit of constructive escapism, so what better time to make the most of this flash sale of our favourite galactic franchise. You'll need to rummage around on the LEGO site to find the details of the deals, but fear not, we've got you covered. Here you'll find direct links to our selection of the best savings on offer.

Essential to LEGO's Star Wars Day celebrations, you will get a free 40407 Death Star II Battle with any order totalling £75/$75 or more, including the below deals. And if that wasn't enough, all LEGO Star Wars orders up until midnight tonight will get you double VIP points (roughly 10% cash back for all your future purchases).

If you're crazy about Space but not so much the Wars, check out our selection of the best LEGO space sets for both adults and kids.

Action Battle Echo Base Defence | | £43.99 at LEGO
Save £11: Aimed at ages 8 +, and with 504 pieces to assemble, this great battle set will be sure to while away the hours. The set features a Rebel base entrance gate, trench section, blaster tower, the iconic Imperial AT-AT Walker and five Star Wars minifigures. Deal ends: Midnight on 4 May 2020.
View Deal