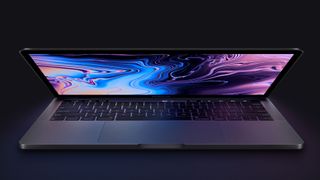 Apple hasn't had an easy ride when it comes to MacBook keyboards. While 2015's infamous Butterfly mechanism was incredibly thin, it was prone to various faults, including stuck keys. This year saw it finally replaced by a more robust Magic Keyboard in both the MacBook Air and MacBook Pro, but now it looks like a much more radical keyboard design could be on its way.

A new patent application (below) spotted by Patently Apple reveals a retractable keyboard design, which could see the entire keyboard sink into the body of the laptop when it's closed, and return to position when opened – all thanks to magnets. This could allow Apple to create a much thinner machine, which sounds like a winner for digital artists on the move (check out best laptops for graphic design if that's you).

Apple is known for pursuing thinness with its devices, but as the Butterfly keyboard showed, this can be to the detriment of usability. Could Apple have found a way to achieve a razor-thin shape without sacrificing the integrity of the keyboard? As with all patent applications, there's no guarantee that this will ever see the light of day, but it's always interesting to see what weird and wonderful innovations the company is toying with, such as a bendable MacBook.

While there's often talk around whether the iPad will ever replace the Mac, Apple clearly has no plans to stop trying to innovate the latter. Besides, both are fantastic devices for creatives in various fields: the iPad Pro is one of the best drawing tablets, while the MacBook Pro is our best laptop for video editing. Check out the best Apple Amazon Prime day deals for brilliant offers on both.