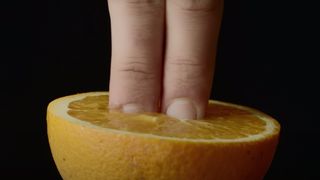 That is not how to eat an orange (Image credit: Swisse Me)

It's not often that a smoothie ad comes with a content warning on YouTube, but then this no ordinary smoothie ad. Swisse Me has released a rather fruity new promotion for its range of ready-to-drink smoothies, and it's got the UK's ad-clearance body a little hot under the collar.

Subtly titled FOODPORN, the ad (below) shows various fruit looking somewhat suggestive. By which we mean downright dirty. Bananas are caressed, kiwis are groped and oranges are... violated. All in sensual slow-motion and with the aid of some creative lighting. It's all very naughty (like many of the best print ads), and if you thought Marks & Spencer's food ads were sexy, you've got another thing coming.

To be perfectly honest, we'd say it's all fun and games until the yoghurt comes out. Until then innuendo-laden direction is enjoyable artful yet cheeky. Did Swisse Me really have to reach for the yoghurt? Even if we're only looking at food, some things are best left to the imagination, lest they enter put-you-off-your-smoothie territory.

YouTubers seem to be enjoying the ad. "If an adult looks at it, it's clearly meant to be taken as innuendo," one comments, "but if a child looks at it it's just fun with fruit, making a mess." Another simply declared, "I love fruit and this video just confirmed that I need to eat more fruit." Job done.

The video, created by UK agency PLAY, is by no means the first suggestive ad we've seen – even this year. This March, a German DIY brand's insect sex ad had us squirming in our seats. The most important thing to remember, of course, is to stay safe – as Durex's sexy new rebrand is here to remind us.