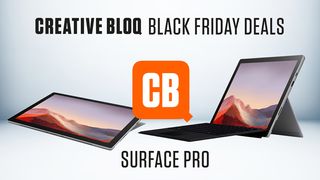 It may seem a way off yet, but, trust us, it will come around quickly. So if you want to bag a great deal in the 2020 sales, now's the time to start saving. In this post we will curate all the best deals on every product in the Surface Pro range, which includes the Surface Pro 6, Surface Pro 7 and Surface Pro X.

The 2019 saw some jaw-dropping deals on the latest Pro 7 device, which was a bit of a surprise. Below you'll find some of the best Surface Pro Black Friday deals from 2019, predictions on what we might see next year and how to find all the best offers. If you can't wait until next year to get your hands on one of these devices, be sure to take a look at our round up of the best Microsoft Surface deals right now.

To give you an idea of what you might expect from the Surface Pro Black Friday 2020 deals, here are the two best offers we saw in the US and UK in 2019 – both of which are still valid!

Last year we saw plenty of strong Surface Pro 6 Cyber Monday deals. Retailers involved included Amazon and the Microsoft online store, plus Best Buy, Walmart and Costco in the US, and John Lewis, Very, AO and Currys in the UK.

Check the deals and price widget below to see the best prices available right now in your region.

Microsoft Surface Pro 6 | i7 | 8GB RAM | 256GB SSD: £909 at Amazon
Save £520: Amazon has just knocked even more off this highly capable machine, offering a whopping 38% off. The powerful Pro 6 has become a firm favourite in the design community.
View Deal

Okay so it's not exactly a Surface Pro. But the Surface Book 2 is another great machine, and there were  some hot deals around in 2019.

Surface Book 2: Up to $500 off in the Microsoft Store
There are big savings to be had on the Surface range in Microsoft's official Cyber Monday sale. Depending on the configuration you choose, you could save up to $500 on a new Surface Book 2.
View Deal

Which Surface Pro models will be getting a Black Friday and Cyber Monday 2020 discount?

At its Fall Hardware event on 2 October 2019, Microsoft unveiled two new Pro models: the Surface Pro 7 and the Surface Pro X, which was good news in terms of getting great deals on the Pro 6 in 2019.

But we were pleasantly surprised to see the Pro 7 play a big part in Black Friday 2019. Typically retailers focus on slightly older stock for their sales, but the Pro 7 some incredible deals up for grabs. The Pro X, however, was nowhere to be seen, which was not a huge surprise. That said, if it's the X you want, 2020 is almost certainly going to see some discounts on the then 13-month old device. We'll collate all the deals here as soon as they're live.

Is the Microsoft Surface Pro 6 worth the money?

The short answer is yes, as our in-depth Microsoft Surface Pro 6 review will attest. Despite the introduction of the Surface Pro 7 in October, the Pro 6 is remains one of the best 2-in-1's around. And the good news is the new device launch will undoubtedly push some brilliant Surface Pro 6 Black Friday deals this year. So if you're in the market for a new tablet and not bothered about having the latest device, the Surface Pro 6 is a stellar option. Want to see how it compares to the newer model? Explore our Surface Pro 6 vs Surface Pro 7 comparison.

If you've landed on this buying guide, you'll no doubt already be aware of some of the specs that make Surface Pros such a sought-after device. They're packed full of features creatives will love: there's a gorgeous screen, super-powerful specs, a stylish design, and they both running the full desktop version of Windows. But there's also a few under-the-radar features that you might not be aware of, including the ability to take screenshots with a Surface Pen, collaborate remotely in real time, and gaze correction. Add all of that up and it's no wonder these clever machines are so popular.

It sounds extreme, but to make sure you get the best Surface Pro Black Friday (or Surface Pro Cyber Monday) deal in 2020, you need a game plan. Step one is to bookmark this page. We'll be keeping it updated with a curated list of the best offers from the most reliable retailers, in the run-up to Black Friday and during the event itself.

While you'll likely find some good offers on the Microsoft online store itself, a number of other retailers will also be offering great discounts, from Walmart and Best Buy to John Lewis and Very. Keeping on top of all the different Surface Pro Black Friday deals is tricky, which is why we're taking the hard work out by collecting them in one place (you're welcome).

Second, remember that while there'll plenty of hot offers on Black Friday and Cyber Monday themselves, those aren't the only days you'll be able to pick up a bargain machine. Eager retailers have been rolling out offers earlier and earlier each year – and with Black Friday falling relatively late this year, we definitely expect some good early deals. In 2019, there were competitive offers popping up from early November.

To make the most of the offers, it's worth checking for add-ons such as software, keyboards and covers, or gift cards that will make your deal even better. It's also worth considering refurbished models – there are some great bargains to be had on pre-owned products.

The very best deals won't stick around forever (many will sell out on the day). If you're reading this article, you're already ahead of the game – make the most of the weeks running up to the end of November to figure out which Surface Pro product is right for you (how much storage do you need? How powerful should it be?), so you know what to focus on and don't end up panic buying the wrong model.