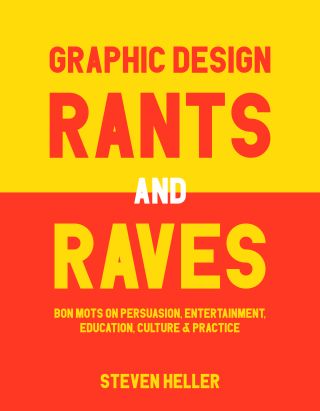 To mark the recent release of veteran designer Stephen Heller’s latest book, Graphic Design Rants and Raves, we have five copies to give away.

Art director, journalist, critic and author Steven Heller is a veteran of American design, having spent 33 years as an art director at the New York Times. Currently, he is co-chair of the MFA Designer as Author Department, special consultant to the President of SVA for New Programs, and writes a column for the New York Times Book Review.

Graphic Design Rants and Raves is an exploration of how visual design has arrived in the 21st century. Looking at design as practice, language, culture, and power, each of the 40-plus essays is a self-contained story.

Heller shares his ideas, criticisms and celebrations on such topics as the branding utilised by Hillary Clinton and Donald Trump; the relationship between design and sex; and the Charlie Hebdo massacre and freedom of expression. He also revisits icons including Paul Rand, Ralph Ginzburg, Frank Zachary, George Lois and Print Magazine.

For your chance to win a copy, simply tweet @ComputerArts using the hashtag #MyDesignRant, including a one-sentence summary of your biggest graphic design rant or rave right now. This could be witty, controversial or just brutally honest – the most important thing is to catch our attention, and give an insight into how you view graphic design.

We must receive your tweet (using #MyDesignRant) before Monday 6 February (midnight GMT), and our five favourites (based on the criteria above) will be selected as the winners. Winners will be notified by 8th February. Good luck!

Entrants must be aged 18+. Judges’ decision is final. Entries to be submitted on Twitter via @ComputerArts using #MyDesignRant by midnight GMT on Monday 6th February 2016. Twitter has no liability in connection with the competition. Read full competition rules