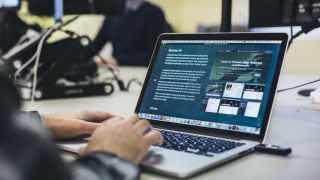 We Create Digital is made up of highly experienced web developers and graphic designers fuelled by a genuine passion for technology. Until recently, Adobe Illustrator was our go-to application for graphic design – indeed, it has been a mainstay for many designers since its introduction in 1987. While a plethora of competing products have been introduced since, most have fallen by the wayside and allowed Adobe to maintain its domination of the market.

Affinity has risen as Adobe’s newest– and possibly fiercest– challenger yet, drawing influence from two of Adobe’s flagship applications: Illustrator and Photoshop. Affinity Designer is a professional vector graphics app with power to spare. Affinity Photo is a dedicated image editing application boasting a wealth of highly refined tools for image readjustment and enhancement.

Affinity Designer and Affinity Photo are available for a one-off fee of £48.99 each, for Mac and Windows, which represents a more cost-effective solution than subscription-based plans. However, that's not to say you'll be getting a sub-standard product.

Affinity’s improbable success hasn’t gone unnoticed, with Apple awarding Affinity with its highly coveted Design Award in June 2015, unveiling Affinity Photo for iPad onstage at WWDC last year, and then naming it App of the Year.

We first started considering moving away from Adobe as our team began to expand. Ultimately, what was instrumental in our decision was a belief that the Affinity Designer is better geared towards the needs of the modern web designer. In this article we'll explore why we made the switch, and how.

Affinity Designer is a high-end graphics software application that has been created for use by professional designers. It is equipped with most of the functionality seen in its big-name rivals, plus a whole host of new features and capabilities. Moreover, it is fast expanding its range of tools and feature set with regular updates – inviting users to submit new feature requests openly on its forum.

Affinity has shown an astute awareness of its audience. A basic example of this would be how users can choose from a range of screen resolution presets based on the dimensions of popular devices. Furthermore, Affinity has clearly been developed with the aim of supporting a streamlined workflow. Customisable layer effects enable designers to effortlessly refine elements of their design, and these adjustment layers can be saved as templates for future use.

These features really shone in a recent project for Musician Go, a central resource for musicians. WCD was responsible for delivering all aspects of branding, design, and development – building a truly bespoke platform entirely from scratch. The asset management panel provides easy access to design elements that crop up repeatedly in projects, a feature we made frequent use of when designing Musician Go.

At WCD we are sticklers for detail and accuracy, which is why we love Affinity’s advanced snapping and grid options. Affinity features zooming capabilities of more than 1,000,000% (that’s right, one million percent!), meaning we can be as precise as we want. It's also geared up specifically for working with both vectors and bitmap images within the same document, without having to switch between programmes.

Affinity offers advanced image adjustment options, which came in handy when we were asked to design a website for a new restaurant called Fellpack. The aim was to showcase the incredible landscape surrounding the restaurant, and to capture the brand's passion for food with vibrant photography.

In Affinity Designer we were able to overlay text without impairing readability and with only minimal desaturation to photos. The result is a website that creates an instant impression on its visitors and captures the vision of Fellpack.

Our transition was aided by Affinity’s support for PSD and AI files – meaning that we were able to work using our existing source files with ease. Similarly, its wide range of file support facilitates our collaborations with external designers and agencies.

Affinity’s slick, accessible and highly intuitive interface mean users need little time to bring themselves up to speed with the nuanced differences between Affinity and Adobe. This also makes Affinity an attractive option for beginners as well as seasoned professionals.

With a free trial available, we’d strongly advise you to consider giving Affinity a chance. It’s been two years since we switched to using Affinity, and we haven’t looked back.