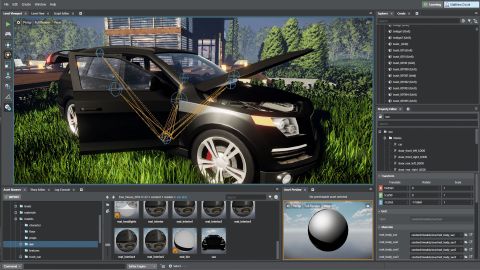 It might not have Maya's more heavyweight options, but Maya LT delivers everything a game artist needs at a reasonable price.

For over 15 years now I’ve been using Maya and can say that I have touched on every aspect of it at one time or another. My days with what was once an Alias product began in game development, but soon I also became involved in production and TV work. Maya became an essential part of my pipeline as it meant I could easily build upon my foundation skills of modelling, rigging and animation to also cover dynamics, scripting, rendering and advanced rigging – without moving to another application.

I do love using Maya but it’s in no way perfect. I have had my fair share of crashes over the years and when it comes down to it, it’s expensive. Even with the recent subscription changes you are still looking at around £1,500 per year to use it. This is a cost that would put a lot of developers off, especially indie developers on a shoe-string or non-existent budget.

I remember the days when Maya wasn’t the standalone package it is seen as today. There was a time when you could choose between two versions – Complete or Unlimited – depending on your needs or budget. Complete was the cheaper option but had all the basics, whereas Unlimited had everything. This all ended in 2008 when Complete was dropped from the product line and from then on there was only one version to choose from.

After looking at the price, it’s good to see Autodesk bringing back a more affordable version of Maya with Maya LT. When it was first released in 2014, Maya LT (which is essentially a trimmed down version of Maya), was quite restricted – even more than it is now – and even though its focus was purely on game development there were still areas it missed. Thankfully, as the years passed, Autodesk has expanded its scope making it much more relevant to today’s gaming environments.

With that said, you’re still missing out on quite a chunk of what comes in the full-fat version of Maya. You won’t have access to advanced systems like Paint FX, nCloth, nParticles, XGen or Bifröst. If you want to render your work, then you are out of luck, and if you’re looking to create more advanced rigs then most of the constraints and nodes are missing too. You can find a full list of what’s missing online, so I won’t go into detail here. Rather than focus on what’s not included, you should instead consider what you are going to be getting for a mere £30 a month (or £222 per year) subscription.

You will have access to Maya’s full suite of modelling tools, including support for subdivision surface modelling. From there you can use Unfold3D to unwrap your model’s UVs ready for them to be textured and then build your shading networks using the physically based ShaderFX nodes. Once you have your model you can then fully rig and animate your creation, either with a custom rig or HumanIK. As a final step, at the touch of a button you can export your assets directly to Unreal, Unity or Autodesk’s own Stingray engine. As an affordable starting point into indie game production, Maya LT (with the free-to-use Stingray) is a nice package.

What’s more, these are just the main elements; there are a lot more tools for you to play with. Check out these Maya tutorials to help you get started.

So as you can see, with Maya LT you get everything a game artist needs – whether a character, environment or even a technical artist. What you won’t get is access to the more advanced systems, but then I can’t imagine anyone working on the next big mobile hit needing any of these.

So when you think about it, £30 a month for an award-winning, industry-standard 3D application, with a game engine included in the price, isn’t much to pay at all.

It might not have Maya's more heavyweight options, but Maya LT delivers everything a game artist needs at a reasonable price.