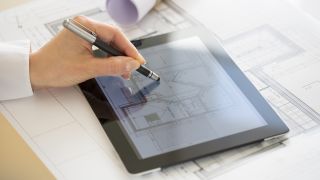 If you're looking for the best tablets with a stylus in 2020, then you've come to the right place. While many tablets are compatible with third-party styluses, it's the tablets that come with the stylus included which are really worthwhile tools for digital creatives.

Not only does this mean you're saving money on buying a seperate stylus, but the best tablets with a stylus included have been built around stylus input, offering tools, features and functionality that stylus-less tablets often lack.

If you're a creative professional or hobbyist, there are loads of great reasons why you should think about buying the best tablet with a stylus your budget allows. The included pen-like styluses allow you to draw, sketch, paint and take notes while you're travelling. They are also great devices for practicing your art, and many modern styluses have pressure sensitivity built-in, which means they can react to the force with which you sketch or paint, making them behave more like pencils or paint.

The good news is that there are brilliant tablets with a stylus that run Android, iOS or Windows, so you have plenty of choice when making a purchase. However, if all that choice can be a bit overwhelming, then we're here to help, as we've listed the very best tablets with a stylus money can buy in 2020 for a whole range of budgets. This is because tablets with styluses don't have to be expensive – there are some impressively affordable tablets out there as well that come with a stylus.

We should note that most of the time, iPads do not come with a stylus included. However, there are often deals that include the Apple Pencil stylus, so we've included some choices here for Apple fans as well. If you want to get an iPad with the Apple Pencil, make sure to see if the stylus is bundled into the deal before you buy.

We’ve picked the best tablets with a stylus according to a number of factors, including drawing area, resolution, pen pressure sensitivity and price, so read on for our suggestions. For more choice, you can also look at our guide to best drawing tablets.

The best tablets with a stylus for drawing and note-taking

Apple’s latest and greatest iPad Pro is a fantastic tool for any creative, and makes for a sublime drawing experience when paired with the latest apple Pencil. Its new edge-to-edge liquid retina LCD display is paired with an A12X Bionic chip (capable of outperforming Intel-based laptops), and the result is what is quite simply the best tablet with a stylus on the market right now.

The iPad Pro no longer uses Apple’s Lightning connector for USB-C, meaning it now works with a range of peripherals, including external displays. The Apple Pencil also attaches to the side of the iPad magnetically, with wireless charging, giving you some extra convenience on the move.

The iPad Pro’s 12.9-inch screen makes it one of the largest tablets on the market, and this gives you an enormous canvas for drawing, an experience that can be further augmented by using one of the brilliant drawing apps for the iPad in the App Store.

So what's the downside? Well, this laptop-like performance means laptop-like prices. You won’t see much change from £1000 for the smallest 64GB storage, and you’re certain to want more than this. Add on the additional expense of the Pencil and this is the most expensive iPad ever made by some margin. If you can justify the price, this is the best pick, but if not, scroll down for some more affordable options.

The most affordable Wacom drawing tablet of its size – ever!

Wacom made an extremely welcome update to its Cintiq range in 2019, phasing out the Cintiq 22HD in favour of this new Cintiq 22 – one of the most affordable, high-quality drawing tablets of its class. The physically large drawing area of the Cintiq 22 makes it comfortable and intuitive to draw on, while the anti-glare glass surface has been laminated to create a slight texture that give some nice bite to your stylus movement. Its resolution isn’t as high as the previous Cintiq 22HD, so the picture is a little softer, but the drawing experience is fantastic.

The Tablet comes with the Pro Pen 2 stylus, a fantastic pen that gives you 8,192 levels of pressure sensitivity to work with. It doesn’t need a battery, taking power from the electromagnetic properties of the screen, and its comfortable heft makes it satisfying to draw with. The Cintiq 22 may not be as affordable as some of its rivals, but for a Wacom tablet it’s incredibly well priced.

A spec bump with a punch

The latest Surface Pro model, Surface Pro 7, is a small update over previous models, but it remains our top choice for a Windows tablet. Unlike Android or iOS devices, you’re getting a tablet that will run full-fat desktop software – so think Creative Cloud  apps such as Photoshop CC without any compromise on features or performance – and use it with Microsoft’s excellent Surface Pen stylus.

In fact the Surface Pro 7 has an Intel quad-core chip, of the same variety that you might find in a laptop. So you can expect it to sail swiftly through tricky filters and have no problem loading complex designs.

And being a Windows PC at its core, it will have no problem connecting to any peripheral you could think of. We'd just like to see a bit more innovation in the next Surface Pro.

The best Android tablet with a stylus

If you're after the best Android tablet with a stylus, then the Samsung Galaxy Tab S6 is the one for you, without a doubt. Samsung's Tab S line has been impressing us for years, and the latest version improves on nearly every aspect of our favourite Android slate.

So, you get an absolutely stunning AMOLED display for image quality even Apple's mighty iPads struggle to match, along with two rear cameras and a powerful processor, which keeps the Android operating system - and any creative apps you're using - running smoothly.

Best of all, and a reason why it's featured in this list, is that it comes with the excellent S Pen stylus, which means it's a brilliant tablet for drawing and doodling on - as well as taking down notes.

It doesn't come with a headphone jack, but otherwise this is a truely excellent tablet with a stylus, and an ideal tool for creatives who don't want an iPad.

The best tablet with stylus for note-taking

We eyed the Lenovo Yoga Book with a combination of intrigue and suspicion when it was first announced. It's a kind of tablet-laptop hybrid with a digital, capacitive keyboard that doubles up as a handwriting or drawing surface. But the result is a tablet with a stylus that's well worth owning.

The traditional surface is 10.1-inch 1,920 x 1,200 resolution screen, which again hits that magic number of 16.7 million colours. The second surface is that capacitive Halo Keyboard, which – despite the lack of digital keys – is accurate enough to take quick notes straight to your chosen word-processing app. Prefer the old-fashioned method? Then you can utilise the included Real Pen stylus instead and use the Halo surface as a digital notebook, with the added bonus of seeing your scribblings saved immediately into your onboard storage.

We know the Yoga Book won't be for everyone (the 180-degree fold back screen means it's much chunkier than most other traditional tablets), but Lenovo's unique proposition means its well worth considering if you can't decide between a laptop and a tablet.

Huawei seems to have an army of tablets in its arsenal, ranging from the basic MediaPad M3 model, which is super-affordable and can do simple note taking, to this Pro model, with some real performance under the hood. This tablet still won't set you back anywhere nearly as much as the iOS or Windows tablets, and is a genuinely good option.

Despite the relatively low price point, you still get an excellent screen and sufficient power for most tasks. The sleek, light aluminium frame is practical and won't embarrass you if you pull it out at a coffee shop.

It's also worth noting that if you've got little ones, Huawei recently unveiled a 'Lite' version that's lower-specced, (slightly) lower-priced and designed for younger users. You can head over to TechRadar to read a hands-on review of the Lite tablet – while it's a nice addition to the range, the kid-friendly focus means the M5 Pro is very much still the better buy for creatives.

New to 2019, the Wacom Intuos Small is, as the name implies, a smaller version of the much-loved Intuos Pro. While it's not exactly pocketable, at 269 x 170 x 8 mm it's certainly noticeably smaller than its bigger brothers and a similar size to the iPad Air. It comes with all the useful features you'd expect from a Wacom tablet, such as a customisable Touch Ring and ExpressKeys that can be assigned to your preferred function – though here you only get six rather than the eight you get on the medium and large versions.

It's bundled with a battery-free Pro Pen 2, which provides 8,000 pen pressure levels and 60-odd levels of tilt sensitivity. The Intuos Pro Small can also connect to a Mac or PC via microUSB or Bluetooth. The Intuos Pro Small is also available at a more attractive price than something like the iPad Mini, so if budget is at the forefront of your mind when picking a tablet, this is an option well worth considering. It's great to see Wacom catering for entry-level and space-conscious users with its excellent Intuos Pro tablets, and long may this continue!

The best stylus to buy for your tablet

If you choose one of the tablets above that doesn't come with a stylus in the box, then we can help you pick out a pencil to purchase:

Wacom Bamboo Sketch ($55/£75)
Specialising in pressure sensitive drawing tablets and high-quality accessories, Wacom is leading the pack when it comes to designing styluses (or, if you prefer, stylii). The clue is in the name as to what the Bamboo Sketch is best at – precision drawing and natural looking sketches. The two customisable shortcut buttons mean you can make it really convenient to use, too.

This Wacom stylus is only for iOS devices, so is a cheaper alternative to the Apple Pencil. There are more options to choose from within Wacom's wide stylus array.

Adonit Pro 3 ($23/£22)
In the cold light of day, a tech company specialising in styluses for note-taking sounds pretty unsustainable. And yet the 2010 Kickstarter firm Adonit has managed to carve out a real niche. The Adonit Pro range has now hit its third incarnation and, with its textured grip and precision disc tip, is the ideal tool if jotting notes on your tablet is essential to you.

It's designed to feel exactly akin to using a regular ballpoint pen, can be used on all touchscreens (iOS and Android included) and is relatively inexpensive.