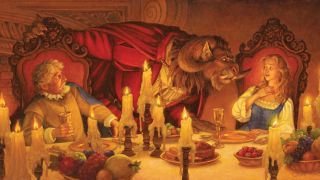 "I'm not proud of my computer illiteracy but I do feel the need to be honest about it and share my situation with others,” admits Scott Gustafson, renderer of gorgeous fairy tales scenes in traditional media.

“It’s only through talking about this shameful problem that I think we, as a society, can come to terms with it and learn to deal with those less fortunate among us who neither text nor tweet...”  He is, of course, joking. As a veteran illustrator of 36 years to date (and  counting), Scott has little need of digital tools, versatile as he is with almost every traditional medium – be it oils, gouache or charcoal. Besides, the kind of gloriously detailed and coloured scenes he paints, harking back to the Golden Age of illustrators, seem to cry out for the gentle touch of media to canvas, rather than the sometimes harshly delineated tones of software.

Scott is unashamedly influenced by the likes of NC Wyeth, Norman Rockwell, Maxfield Parrish and Arthur Rackham, and like those admired artists, he creates nostalgic, glowing images that never veer to the sickly or twee. It would be slightly reductive to call him a children’s artist, although it’s true that Scott has created many illustrations for age-old fairy tales and bedtime stories (if you’re of a certain age and grew up in Britain, you might  be reminded of the classic hardback Ladybird story books). Yet he has also written and illustrated his own children’s book, Eddie: The Lost Youth of Edgar Allan Poe, which showcases a somewhat darker side to his talent, and commercial clients include Playboy, The Saturday Evening Post, The Bradford Exchange, DreamWorks and The Greenwich Workshop.

"I grew up in a small town in northern Illinois, and attended elementary and high school there,” Scott says. “I always liked to draw and was continually encouraged by my parents, relatives and teachers to continue drawing and painting, so the idea of someday becoming an artist was with me from just about as far back as I can remember.”

However, it was animation that called to the young Gustafson, so much so that he eventually majored in animation at the Chicago Academy of Fine Arts. Ambitions changed when he realised that he could become a freelance illustrator, but he feels that his education still aids his work today.

"In studying the work of the great animators like Ollie Johnston, Frank Thomas, Eric Larson, Woolie Reitherman, Bob Jones and Bob Clampett, I found that they helped me to learn how to capture facial expressions and pose a figure so that the posture and pose helped define the character and the role that he or she plays within the story,” Scott explains.

The appeal of animation

“These days, I’ve actually found a lot of inspiration looking up pencil tests of great animators online. The work of Glen Keane and Sergio Pablos is particularly wonderful... I’ve grown to prefer these pencil tests because they’re the actual animator’s drawings, filmed in sequence as a test before going to colour. I’d recommend taking a look for anyone who appreciates great character development and beautiful drawing.”

So would he consider dabbling in animation again? “Well, animation on the level of the animators I’ve mentioned is a very complex art, and as much as I’ve gone in and out of fantasising about it again, I usually take the lazy way out and watch classic films like Fantasia or Lady and the Tramp!”

As he has done for most of his professional career, Scott works from home, albeit in his own studio which takes up the entire second floor of the house: “This space is one of the main reasons we bought this house over 20 years ago.” He also tries to keep to regular work hours, which helps keep a separation between work and non-work time. “When I was  younger, living in a four-room apartment, I got up late and worked late, and it seemed like that’s all I did...”

A typical Gustafson image begins as a series of thumbnails, anything up to 12 loose sketches to set the idea. That becomes a larger sketch: “I average about three of these to show the client, or just to make sure I’ve tried more than one approach to a given idea.” A more fully fledged drawing comes next, with reference, props and even a model shoot if necessary.  “Then I transfer this drawing to the surface on which the final painting will be done – usually gessoed masonite. This is done by either directly tracing through a copy of the final drawing using graphite paper, or by mounting an archival print out of the drawing onto the panel.”

With the image complete, Scott turns his attention towards colour. “On a mounted, reduced print-out of the finished drawing, I do a loose indication of what I think the colour will be for the final piece, followed by underpainting. Depending on the piece, I do either a monochromatic tonal underpainting to establish the values, or, referring to the colour study, a thin, transparent layer of those colours in the corresponding areas of the transferred drawing.”

Every painting's a challenge

The final stage is painting. “Depending on the complexity and size of a piece, this can take anywhere from several days to several months. Last week, for instance, I finished painting a vignette in three days, but the picture before that one – another illustration from the same story – took three weeks to paint. They are all different and all present their own surprises and challenges.”

Scott has experimented with many mediums over his carer, but primarily he now sticks to acrylics or oils for finished colour work. “In recent years I’ve been concentrating almost exclusively in oils as they offer the widest range of flexibility and possibilities, as well as depth of colour and overall richness.”

It’s a complex process – though the results are certainly worth it – and it’s little surprise that Scott hasn’t really had time or inclination to investigate digital processes. “Seriously, though, the computer is a fantastic tool, and I’ve come to rely on it for many things, chiefly communication and reference,” he says. “I leave anything more complicated than that in the capable hands of my wife and business partner, Patty, who handles all those aspects of our business marvellously.”

With a new book in the making, tentatively titles Storybook Fables and scheduled to be published by Artisan in autumn 2017, life is good. Scott admits that he has never really though about what’s next beyond the current project, and so far that has worked out well for him and his family. Of course, there are always new ambitions.

“I used to fantasise about illustrating Alice in Wonderland or The Wind in the Willows, but John Tenniel, Rackham and EH Shepard are pretty fast company,” he laughs. “If I were offered the chance, who knows? I love illustrating classics, but I think it would also be exciting to work with a contemporary author as well.”

This article originally appeared in ImagineFX issue 138; buy it here.