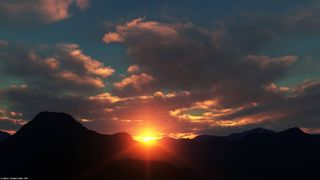 The summer, at least the portion before Siggraph, can be a little on the quiet side, as developers hold off on new releases until they’ve had a chance to wow the masses at the world’s biggest trade show/conference. That said there are still a few notable releases that are well worth talking about, so read on to discover what’s hot and new in the world of the 3D artist.

We are spoilt for choice when it comes to sharing our portfolios, networking with other artists and looking to get the next commission. You can stick with one of the big names like Behance but for some that can feel a bit too corporate.

Nabaroo is a newcomer to this arena and what really stands out is the clean design, beautiful user experience and efficiency. It’s already got quite a range of artists using it, so check it out and if you want an attractive way of sharing your work and reaching potential clients it’s making a promising start. There’s also a mobile/app version on the way.

Whether or not you are a Modo user or not is down to your tastes and needs but there can be no denying that this is a good time for modo releases. The latest addition to the Modo armoury is V-Ray for modo, bringing its world-famous render quality to the workstations of more artists.

Whole articles could be written about V-Ray and its excellent toolset but the highlight, other than quality, is its ability to make the most of the user’s system. The CPU/GPU war isn’t over yet and Chaos Group realise this, giving you the options to use the power of both in this latest release.

As well as a number of new primitive objects and retopology tools (which have been a strong point for 3D Coat for a good few years now) Pilgway has brought quite a substantial update to its users. Clearly aimed at helping artists fit into a game development pipeline even better, the update includes many tools and additions to help get textures from the app into game engines. These include things like multiple map exporters, ptex improvements and a completely new PBR shader.

Universe isn’t a single product but is actually an online library of effects for post production software like After Effects and Premiere. V2.0 is the latest release and, as well as some big new tools, also brings with it a logistical decision to rid the system of the free user version.

That out of the way and the biggest news is the HUD creator, which is a tool allowing the creation of heads up displays, such as you might have seen in Iron Man. You can start of simply and work your way up to massively complex multi-layered, animated HUDs and the results are great.

There’s also a new preset browser, which you will feel at home in if you are a user of other Red Giant products like Particular. It makes it easy to quickly build your composite and stay creative.

Other newcomers include the Logo Motion tool and a Line Animating tool, among others.

If you have ever fancied a spot of world building but were put of by the price of some of the big name apps out there then now is a great time to dip a toe in. Terragen has been around for a good few years but has been hard at work on a new version. Unlike many developers they have decided to unleash a full, unrestricted version of their beta, for free (until the full release at least).

So if you want to try out the new ray tracing engine, play with some of the best cloud shaders out there or simply build your island paradise, then head over and sign up.