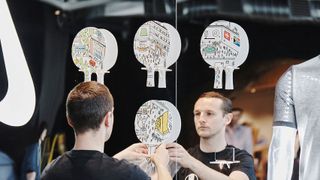 Some of the world's most exciting artists have collaborated with The Art of Ping Pong on an artistic and noble use for table tennis equipment – covering ping pong bats in interesting designs and illustrations and auctioning them for charity.

Back for a fifth year, The Art of Ping Pong brings creatives together to raise money for charity, and this year it's helping the young adult cancer support group Trekstock. Since 2013 its charity auctions have raised over £15k.

For 2017, The Art of Ping Pong has roped in help from more artists, illustrators and designers than ever before, with 27 creatives signing up to raise money for Trekstock. Artists include established greats such as George Hardie, who created the artwork for Pink Floyd’s The Dark Side of the Moon, and newcomers such as Mr Doodle.

The online auction started on 26 October, but you have until 30 November to pick up specially made artwork and raise money for a worthy cause.

There is just over a week left to bid on my @artof_pingpong table with all proceeds going to @trekstock. You can also still grab one of my @everpresshq T-Shirts. Visit theartofpingpong.co.uk to find out more

On top of ping pong tables, you can also get your hands on eight specially made T-shirts, thanks to a partnership with Everpress. Artists have also created bespoke ping pong paddles for the auction, which you can explore by clicking left to right in the gallery below.

If you're in the area, there will be a closing party for The Art of Ping Pong on 29 November at Below One Fifteen, 115 Curtain Road, Shoreditch, London.