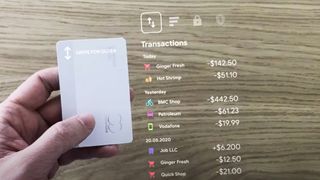 Apple is all about augmented reality right now, from touting the power of the new iPad Pro's LiDAR Scanner, to highlighting various AR apps (more on these later). As with any new technology, it can be easy to question what it's actually useful for. But a new concept video has arrived demonstrating how AR could work with the Apple Card to give the user information about their balance and transactions – and it looks pretty darn exciting.

Volodymyr Kurbatov's concept video (below) shows the user swiping the Apple Card as one would an iPhone, while information appears alongside it. A few rotations of the card change the date from balance to recent transactions, and even allow the user to set a new credit limit. "This is a future I could look forward to!" says one commenter, and we agree – it's one slick-looking concept.

Something that isn't clear from the video, however, is what AR device is needed to view the information. "How would the device work? Embedded in my eye or my brain?" asks one YouTuber. Kurbatov doesn't elaborate, but there are various possibilities.

According to Cult of Mac, iOS 14 might include a built-in augmented reality viewing app, and there are even rumours that Apple is working on a set of AR glasses. Either way, Apple is clearly doubling down on its AR efforts, so something like Kurbatov's concept could very well become a reality.

In a dedicated augmented reality page on its website, Apple extols the virtues of the technology. "Imagine if the line between the virtual and the real simply didn’t exist," it says, which somehow manages to sound both inspiring and terrifying. Fortunately, Apple's current examples on the page are a little less dystopian – such as the IKEA Place app (which lets you see how furniture might look in your room).

Apple also claims that the new iPad Pro's LiDAR scanner offers "cutting-edge depth-sensing capabilities" which make the tablet 'the world’s best device for augmented reality". Time will tell what this technology actually allows us to do in the future, but for now, we're happy to sit back and enjoy cool creative concepts like this one.