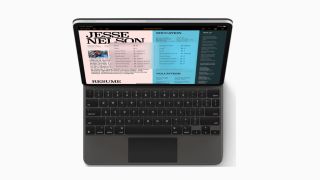 The new iPad Pro 2020 is finally here, and it comes in two flavours: the 11-inch and the 12.9-inch. Both models might look very similar to the 2018 version of Apple's tablet, but there have been some changes under the hood. There's a A12Z Bionic Chip and eight-core GPU, a new camera and a new, more powerful, and more expensive keyboard. It really is a nice keyboard, though (more on that later).

Read on to discover more about the changes to Apple's latest tech, as well as get a deal on a new iPad Pro 2020, which is out now. And don't forget to check out the best iPad Pro apps to make the most of your Apple tablet.

The new iPad Pro has a A12Z Bionic Chip and its 8 core GPU makes it perfect for 4K video editing work, as well as working in 3D and AR. Apple even claims it's "so fast most PC laptops can’t catch up", though we've yet to test this out.

The new iPads are available in space grey or silver, and have the lovely rounded corners of previous models, and just the one USB-C connector.

There are now two rear cameras on the iPad Pro: one is 12MP f/1.8 and the other is a 10MP f/2.4 aperture. The addition of two cameras plus the new LiDAR Scanner means an improvement in the depth of your photos, as well as being a boon for those using AR apps such as Google AR.

Storage wise, the iPad Pro starts at 128GB, with 256GB, 512GB and 1TB also available, and both models are available as just WiFi models or as WiFi and cellular (so you can put in your SIM card and use mobile internet, at the moment this is just 4G, not 5G).

The battery is said to last 10 hours, or 9 hours using a cellular connection.

The Magic Keyboard was the thing that really got us excited about the iPad Pro 2020. It magnetically attached to the iPad, and basically means that the iPad floats above the keyboard, which mimics a more traditional laptop setup, with a screen riser and a separate keyboard. It also means you've got more flexibility with finding the right angle to work at. And, its keys are backlit.

Perhaps the headline feature is the addition of the trackpad, though. This will make a lot of fiddly tasks a lot easier on the iPad, selecting and moving things around should be as easy as on a laptop.

The new iPad Pro 2020 is out now, with the Magic Keyboard to follow in May.

If you're not convinced you need the latest iPad Pro, then see our best deals on older  models below.