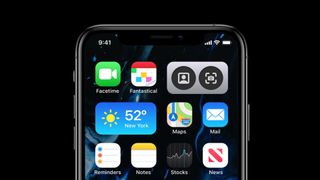 These might be strange times, but the Apple rumour mill certainly hasn't stopped for breath. From iPhone 12 concepts to the will-they-won't-they drama of the still unannounced budget iPhone 9, there's been no shortage of speculation among Apple fans over the past few weeks. And today is no exception, with an intriguing iOS 14 concept design thrown into the ring.

9to5Mac reported over the weekend that Apple is working on the first ever widgets for the iOS home screen, and UX designer Parker Ortolani has mocked up a beautiful concept to show us all what these could look like. Ortolani has imagined a framework for developers called Springkit, which would allow them to create three types of home screen view for apps: the standard static icon, a live version of the icon which can display (you guessed it) live information, and a new, full size widget.

Looking for iOS apps? Check out our best iPhone apps for designers.

In Ortolani's example (above), the Weather app is now a live icon (the size of two standard icons), displaying live weather conditions, while the Activity app is now a full-size widget spanning the length of the entire screen with daily exercise information (we might 'forget' to activate that one).

Also according to 9to5Mac, Apple is planning a few changes to the home screen with iOS 14. As well as widgets, it is also working on more wallpaper features including the option to blur the existing wallpaper on the home screen view (while maintaining the original on the lock screen). This makes sense – a busy wallpaper can make navigating icons a little confusing.

As with all Apple rumours, it remains to be seen whether these upgrades will see the light of day, but it's always fun to speculate in the meantime. Last week, we saw a brilliant iPhone 12 concept, which did away with the notch completely. And let's not forget, as shown by the recently-announced iPad Pro Magic Keyboard with built-in trackpad, rumours can sometimes become reality.