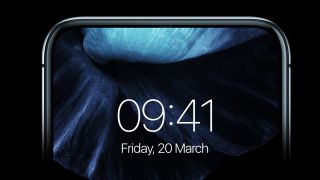 With the world in turmoil, it's anyone's guess when Apple's iPhone 12 will finally be revealed. But the wait has done nothing to dampen the anticipation around its arrival, with Apple fans everywhere eager to get their hands on the shiny new device. While we wait for official launch news, graphic designer Donel Bagrov has come up with his own bold concept design for the iPhone 12 Pro.

Leaked specs have already given us a decent picture of what to expect from the latest models. According to Tom's Guide, a report from established Apple analyst Ming-Chi Kuo reveals there will be four iPhone 12 models, and they'll be the first iPhones with 5G capabilities. We also wouldn't be surprised to see them include the same ProMotion technology that has given the iPad Pro a buttery-smooth refresh rate. While these features would further cement the iPhone as one of the best camera phones for creatives, Bagrov's concept goes a few steps further with some unexpected details.

Firstly, where's the notch (aka the black part housing the top speaker, front camera, and Face ID technology that cuts into the display)? With an under-display camera, this concept would be the first truly all-screen iPhone. While the notch was widely mocked at the launch of the iPhone X in 2017, the design has since been adopted by countless smartphone manufacturers. But is Apple ready to remove it completely? We're notch sure (sorry).

The second big surprise is what the Bagrov calls 'Slide and TapTap'. With his concept design removing all buttons, in their place are what appears to be touch-responsive 'sliders', which can be used to toggle options such as volume. They bring to mind the Apple Pencil with touch bar that Apple recently filed a patent for.

Rounding off the design is a slew of more traditional upgrades, including improved battery life, reverse charging and just enough cameras to count on one hand.

We'd love to see Apple take a few cues from Bagrov's design, especially the huge, uninterrupted display. Notch or not, we can't wait to see what Apple actually has in store for us. In these uncertain times, though, it's not just a question of what, but when.

If you can't wait, or aren't bothered about having the latest Apple device, here are the best deals on other iPhone models in your area: