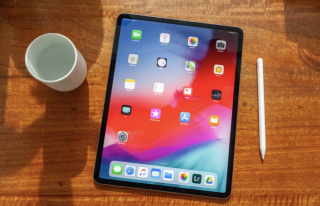 Two new patents filed by Apple have revealed brand new features the company is exploring for the Apple Pencil, including a touch bar along the edge of the device. Named "Stylus with a Glass Component" (we have a feeling the name would change), the patent suggests that the current flat edge of the Apple Pencil would be a glass display panel – perhaps like a much smaller version of the touch bar on the MacBook Pro.

Using the iPad and Apple Pencil for creativity? Check out our favourite iPad apps for designers.

Even wilder is the suggestion that the touch bar could also make the Apple Pencil appear transparent, allowing the user to see what's beneath the area the stylus covers – which could be particularly helpful for detailed paintings.

It's an intriguing concept, but until we see it in action (and this is just a patent, so it might never happen), it's hard to say how well it will work in practice. While we love the idea of extra functionality, one could argue that the beauty of the Apple Pencil is in its simplicity. Despite the magic going on inside, externally, the Apple Pencil is as almost as uncomplicated as an actual pencil. A screen would certainly change that.

A second patent suggests a new kind of haptic feedback for the Apple Pencil, letting it nudge a user's hand towards where an app thinks it should go. Another intriguing idea, although we hope the Apple Pencil is discerning in what it forces us to write or draw.

As these are patents, these are purely ideas that Apple is exploring at the moment – some, all or none of them could see the light of day. Luckily, the current 2nd generation Apple Pencil is still a brilliant device – check out the best Apple Pencil deals for 2020 if you want one. And if you missed the news, Apple revealed a brand new iPad Pro this week with an exciting new keyboard, so there's plenty of new Apple tech to get your teeth into while we wait and see what's next for the Pencil.