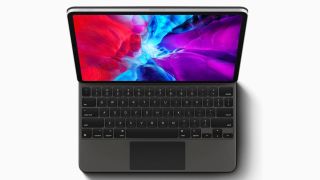 Apple has announced a brand new iPad Pro, in both 11-inch and 12.9-inch sizes, available to order today. While they look very similar to 2018's models, there's a lot more going on inside, including a new processor, camera system and a brand new Magic Keyboard accessory.

Apple claims the new iPad Pro to be "more powerful than most Windows PC laptops". And boasting a A12Z Bionic Chip and eight-core GPU, it certainly appears to be step up from the previous model (check out our iPad Pro 2018 review). But while the new specs sound great, it's the new Magic Keyboard accessory that's really peaked our interest.

The new accessory is backlit, and elevates the iPad into the most amazing-looking floating position, allowing for more comfortable use. Compatible with both the new iPad Pro and the 2018 model, this is the first iPad keyboard to feature a trackpad. In terms of user experience and workflow, easy positioning and not having the disruption of switching from keyboard to screen to navigate around will be a welcome addition for many creatives.

The Apple newsroom reports: "Rather than copying the experience from macOS, trackpad support has been completely reimagined for iPad. As users move their finger across the trackpad, the pointer elegantly transforms to highlight user interface elements. Apple has put together a fun video called 'How to use a computer' which shows the new keyboard in action:

The new iPad Pro also comes complete a new ultra wide camera, studio quality microphones and a LiDAR (Light Detection and Ranging) scanner that Apple says delivers 'cutting-edge depth-sensing capabilities, opening up more pro workflows and supporting pro photo and video apps'. Add all of these new features together and the iPad Pro seems to be edging ever further towards MacBook capabilities. And of course there are the perks that come with using an iPad, such as Apple Pencil compatibility – the new tablet works with with the same 2nd generation Apple Pencil as the 2018 iPad Pro.

Along with the new iPad Pro, Apple also announced an updated MacBook Air. Several more products have been rumoured over the last few months, including a revamped MacBook Pro and budget iPhone 9. When we might see these is anybody's guess – Apple's WWDC conference in June has been moved online in the wake of coronavirus, so they might appear then. Or perhaps we'll get another surprise announcement – who knows?

In the meantime, you can get your hands on a shiny new iPad Pro 2020 below. And if you're not bothered about having the latest version, don't miss our round-up of the best cheap iPad deals on all other models.