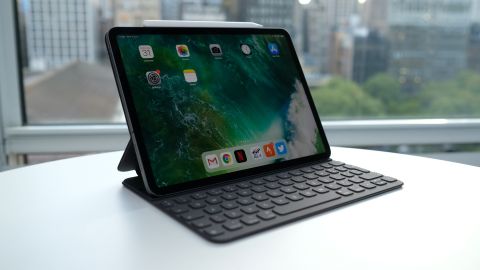 The new iPad Pro is an incredibly capable tablet, offering desktop-class power in a wonderfully small package. Some bugs remain and some apps need optimising, but Apple has made finally made a tablet worthy of the Pro name.

The iPad Pro 11-inch is a device that Apple has designed to offer creative users freedom. Armed with the best iPad Pro apps, it gives digital illustrators a powerful sketchbook on the go and allows architects to show their complex ideas without needing to wrestle a cumbersome laptop around. Movie makers get a screen that can display true colour and photographers will be delighted with the portable studio they’ve been craving. It’s an ultra-thin tablet fighting against the most powerful laptops on the market – and it’s giving as good as it gets.

Let’s not hide it: the iPad Pro is a very expensive machine, especially when it doesn’t offer a desktop-class experience. The base price of $799/£769 isn’t terrible, but you’ll be spending another $300/£300 or so for the necessary keyboard and Pencil, and you’ll probably want the LTE (Wi-Fi and Cellular) version so you’ll be adding another $150/£150 to the cost. That means that for the base 64GB storage size, you’re already spending $1250/£1219 – roughly the price of a Core i5 Macbook Pro.

If you want to up the storage to the maximum 1TB, then you’ll be easily spending over a couple of grand – and this is for a tablet that doesn’t quite have the capability to fully replace a Windows machine or MacBook.

There are very few tablets on the market that can even come close to the raw power of the A12X Bionic chip, an engine developed by Apple for the new iPad Pro specifically. In our benchmarking tests it outstripped the nearest device by nearly double, and thrashed a number of capable Windows laptops too – including the Microsoft Surface Pro 6 and the HP Zbook X360 G5.

This power translates into speed through the machine – combined with 6GB of RAM there’s very little this tablet can’t manage, as long as there’s a dedicated app for it. See our pick of apps that come alive with the Apple Pencil for more.

We saw a demonstration of the forthcoming Adobe Photoshop for the iPad, and the speed at which it can zoom while managing over a hundred layers was truly impressive. We’ve had no moments of slowdown with the machine so far, and the only real issues we’ve encountered are with apps not quite being optimised for the new machine, such as Gmail slowing down and failing to react to touch on the odd occasion.

However, these are being quickly eradicated now the new iPad is on the market, and we’d expect the raw power to be fully exploited by developers as they get their hands on the new tech.

Apple loves to create a more natural look with its screens, with the P3-level color display definitely erring away from the sharper, punchier colours of tablets like the Samsung Galaxy Tab S4.

The result is that things can look more muted on the display in comparison, but for those wanting truer colour reproduction for creative projects, Apple is claiming industry-leading quality in terms of the vibrancy and saturation on screen.

We’re not sold on the idea that the 11-inch screen – which features specially-crafted curves at the edge for a more natural look – is an edge-to-edge display, as the bezel around the edge is still pretty chunky, to make sure you don’t tap the wrong thing when zooming through your apps.

The 2388x1668 resolution translates to a 264-pixels per inch sharpness, and it looks great for every task we tried. The peak brightness of 600 nits is a little on the low side these days though, as it means the screen is not HDR-compliant – although it is capable of playing back HDR content, just to confuse things.

The Apple Pencil has been redesigned, but it’s hard to call it a true upgrade in terms of performance. The main changes are useful though: it now magnetically clips and charges to the side of the iPad Pro, and there’s a double tap function baked in to allow you to switch between modes in apps.

In the main Notes app, this is easily the best performance we’ve seen from a stylus from Apple, with the Apple-created software taking full use of the Metal 2 framework to give direct access to the GPU. This results in far-reduced latency when sketching or writing, and it’s easily the best experience we’ve had on a iPad.

Variable pressure levels and the capability to use the edge of the tip give a new dimension to input, and the range of apps set up to take advantage of the Pencil (with Pixelmator and Procreate strong favourites) are numerous. Lightroom is also available, and the aforementioned Photoshop is making its way in 2019.

We did have a couple of issues with the Pencil, namely that the Metal framework isn’t used on every app yet, it seems, as we noted a little more latency in some applications. Also, the Pencil just refused to connect when being removed from its magnetic charging on the side of the tablet, which isn’t what you expect for a device of this cost.

Apple has baked in a few new features for the new iPad Pro, with Face ID replacing the home button and fingerprint scanning combo. The facial recognition is swift and far easier to use, and works in any orientation, although we did manage to cover the camera most of the times we picked up the new Pro.

The lack of home button means the interface is navigated with gestures, flicks and swipes moving you through the screens. It’s incredibly intuitive, and allows you to easily jump between apps and multitask across two apps with ease.

The speakers around the edge of the new iPad Pro, one in each corner, have their own woofer and tweeter, and movie audio in particular is excellent.

One thing to note: USB-C is now the physical connection on offer here, bringing it more in line with the MacBook and allowing for faster data transfer. It’s annoying if you’ve got your life set up around Lightning cables, and you can’t connect flash drives easily either.

The iPad Pro, for all its power and precision, is still just an iPad. That means you can’t use it as a full laptop replacement, as there’s just so much it can’t do. It can’t download documents from the web easily. It can’t accept files from all external sources easily. It’s too reliant on developers making great apps to bring it to life.

But as a second machine, one that allows you to be creative on the go and have a portable music studio, AutoCAD platform and photography editing suite in your bag, there’s very little better out there. The bugs in the system still irk, but if you’re after a powerful tablet that lets you get on with your job, the new iPad Pro is certainly worthy of a strong consideration.

The new iPad Pro is an incredibly capable tablet, offering desktop-class power in a wonderfully small package. Some bugs remain and some apps need optimising, but Apple has made finally made a tablet worthy of the Pro name.