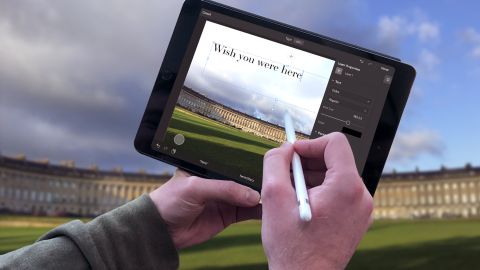 In its current state, Photoshop for iPad is lacking some important features. The tools on show work well, but this represents the early stirrings of a slumbering giant on the portable device stage, rather than the shining titan we'd like it to have been.

The wait is over – Photoshop for iPad is finally here – at least – in name. Even by Adobe’s own admission, this app has been released with limited capabilities, with the intention of adding more features as users get up to speed with the new way of working.

Where are we with iPad apps in general? Developers are forever striving to close the power gap between tablets and desktops, but it’s only with the latest iPad (supported by Apple’s Sidecar) that we’re really beginning to see the potential of portable devices as viable working machines. Advances in technology have made it possible to perform increasingly complex photo edits on the go, with the advent of such apps as Affinity Photo and Pixelmator, but few can boast the same influence and heritage as Adobe Photoshop.

Does Photoshop for iPad come anywhere close to its desktop counterpart? Has Adobe shot itself in the foot with unrealistic aspirations and a self-imposed deadline? Will it earn a spot in our best apps for iPad round up? Read on for our full Photoshop for iPad review.

The opening screen of Photoshop for iPad is encouragingly similar to the desktop app, but there are some notable omissions in the New Document window – no CMYK option, no link to Adobe Stock, no Artboards, no saved presets and no Advanced options – that’s a lot to be missing before even opening a document. Despite the tab for ‘Film and Video’ documents, there is no actual video or GIF capability at this time.

Photos can be imported from Camera Roll or directly from the Camera, while PSD projects can be continued directly from the computer, thanks to cloud-based saving. Working offline is no problem and files are re-synced over CC when back online. Cloud Documents is a practical solution for cross-platform sharing and one of this app’s most attractive features.

After opening a document you are presented with a reimagined Photoshop. This app is a champion of minimalism ahead of functionality – presenting a stark, pared-back interface, with tools hidden behind a veil of icons and menus. Some icons are immediately obvious in their functions, while others require some experimenting to discover their use. Adobe have attempted to design a UI for smaller screens, maximising canvas size without compromising on usability, while optimising for touch and pencil.

For any native to iOS, this may come as intuitively as using a mouse, but for a seasoned desktop user it takes some time to reverse years of muscle memory and adapt to new processes. Luckily there is a practical ‘help’ section in the top-right corner, which contains plenty of tips, tutorials and a list of shortcuts. In the same area is the export button, which allows you to save your document as a PNG, JPEG, PSD or TIFF. There is minimal customisation of the workspace and no way to save any personal presets.

The layers tab has two configurations – a panel of smaller squares that take up very little space and a more extensive window that resembles the Layers panel from the standard app. Both offer the same basic layer options like Opacity, Blend Modes, Masks and Groups, but not necessarily where you would expect to find them. It is frustratingly difficult to achieve basic operations, like grouping layers or moving them up or down in the tab.

Adding an Adjustment layer requires you to hold down the New Layer icon, select ‘adjustment layer’ and choose the one you want. Although a matter of seconds, it feels like an annoyingly slow and cumbersome experience, especially if you want to add multiple adjustments quickly. It does however have all the vital adjustments needed for photo correction – Brightness/Contrast, Levels, Colour Balance, Black and white, Exposure and Hue/Satuation. If you are an advocate of Photoshop filters then you will be disappointed to learn that there are currently only two currently available – Gaussian Blur and Invert. It seems you could spend just as much time talking about what this app is missing as you could one what it currently has.

Adobe has previously demonstrated huge file sizes on the iPad, containing up to 500 layers, without displaying any lag. This appears to be a fair reflection of the power of the app, which is fast and responsive – seeming to perform some tasks even better than on a computer.

The standard Photoshop toolbar is located on the left of the screen, with a modest array of tools available, bearing recognizable icons. The image enhancement options are fairly comprehensive, certainly among the best for iPad, achieving great results for general edits. The Clone stamp, Brushes and Healing brush in particular are well suited to Apple Pencil, while Transform lets you resize and distort layers easily. But it is lacking those tools that make it recognisable as a true Photoshop app – Pen Tool, Shapes, Burn, Dodge, Blur and History Brush.

The Selection and Marquee tools are fine for rough work, but without a Pen tool or a Refine Edge there is a distinct lack of precision in these selections. There is also a basic text option with the Type tool, but it suffers from the Character and Paragraph windows being combined into one diluted tab.

If you own an iPad-friendly keyboard then standard Photoshop shortcuts are possible, as well as some useful additions like the double-finger tap for Undo. The most novel of these is the Touch shortcut, which is displayed as a translucent circle on the canvas, similar to the 'toggle button' used in mobile gaming. It works in the same way as the Shift or Command key, letting you switch between different tools without having to go back to the toolbar. It takes a bit of getting used to and can be awkward to reach for, but could prove to be a big time-saver in the long run.

There are some instances where a shortcut would feel natural and logical, such as double-tapping the screen to confirm a transform, but doesn’t work the way you want it to. Perhaps this is indicative of Adobe’s long-term commitment to an evolving system that responds to the feedback of its users.

At Adobe Max 2018, Adobe described this app as "not a watered down version of Photoshop, this is real Photoshop". Unfortunately this is not true, it isn’t real Photoshop, but more like a pick-and-mix of some of Photoshop’s most popular features, with the focus on retouching and compositing – Photoshop with stabilisers on. As a basic portable photo editor it certainly ranks among the best, but there are plenty of apps already available on iPad that do a similar job at a cheaper price.

If you’re already a CC subscriber then it is well worth the free download, if only to experiment with as an extension of the full desktop app, allowing a smooth transition to pick up projects on the go. The technology on show is impressive and raises the expectations for the possible additions that will come down the line. However in its current state it cannot be considered a replacement for the real thing – and suffers from that inevitable comparison, like a child who can’t live up to their parent’s glory.

Ultimately this comes down to your own opinion – you can either view this as a premature release that fails to fulfil on its promise or a brave first step on an undeniably exciting journey. It’s certainly a statement of intent by Adobe and it’s now up to them to follow through on that potential.

In its current state, Photoshop for iPad is lacking some important features. The tools on show work well, but this represents the early stirrings of a slumbering giant on the portable device stage, rather than the shining titan we'd like it to have been.