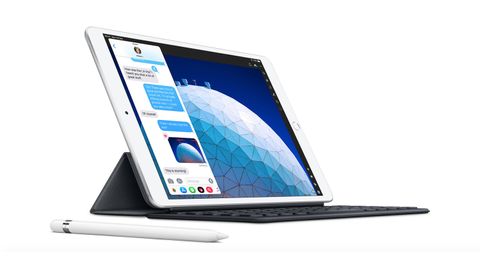 The iPad Air has been resurrected to become Apple’s most balanced digital canvas, one that doesn’t compromises on performance, yet doesn’t push the boundaries of price. It’s a brilliantly sized tablet for drawing and photo editing, thanks to its bright and colourful laminated screen. We just wish it used an easier-to-wield second-gen Apple Pencil.

Apple’s iPad Air 2019 acts as the new best way for creators to get an expansive 10.5-inch tablet screen and the support of both the first-gen Apple Pencil and 2-in-1 keyboard cover – without completely blowing their budget.

It’s the middle-of-the-pack iPad that fits nicely between four other iPads: the entry-level iPad and smaller iPad mini (2019), and the more serious (but seriously more expensive) iPad Pro 11 and iPad Pro 12.9. While digital illustrators will miss the extra perks that come with the unsupported second-gen Apple Pencil, the rest of the new iPad Air is ‘Pro’ in everything but name.

The iPad Air price is going to be the key selling point for some people and an absolute deal breaker for others. That’s because, for the first group, it’s a considerable bargain next to the iPad Pro 11 and iPad Pro 12.9. It’s the cheapest iPad with a large fully-laminated screen and compatibility with the Apple Smart Keyboard cover. So its almost-Pro-level compromises come down to a lack of a bezel-reduced display and fleeting Apple Pencil Gen 2 support.

The Air does cost a premium over the value-priced iPad 9.7, which is often on sale for dirt cheap and also has Apple Pencil Gen 1 support. But anyone using these iPads for serious illustration or photo editing via the Apple Pencil will appreciate the superior iPad Air 2019 screen.

The main draw for creators is the iPad Air 2019’s 10.5-inch screen, not just because it’s slightly bigger than the iPad 9.7 care of less needless bezel, but also because Apple built it to have a fully-laminated display.

The Air also benefits from the wide P3 colour gamut, a Pro-level boon for serious photogs and artists, as well as Apple’s True Tone display technology. True Tone helped when we were staring at screens for hours on end – it shifted the blue light to a more yellow tint to match the lighting in our office. But we had to remember to turn it off when sketching for the sake of colour accuracy.

The only missing display element is ProMotion, which is Apple’s resourceful adaptive screen refresh rate technology. It further reduces Apple Pencil latency and makes video more fluid at 120Hz, but only when needed as to not strain the battery life and resource. But that’s the one Pro-level display perk you’ll have to live without on the iPad Air.

The first-gen Apple Pencil is a double-edged sword that cuts both ways. It’s a invaluable tool with varying pressure and tilt sensitivity, fantastic palm rejection and no discernible lag, just like the Pro-only second-generation Apple Pencil. The adjustable pressure curve in a popular apps like ProCreate make it a useful everyday sketching tool.

Our biggest pain points with the Apple Pencil occurred when we weren’t using it. Where do you put it when you’re carrying around the iPad Air? It doesn’t magnetically stick to the frame like the second-gen Pencil does on the iPad Pro. Did you leave it on a table? Plot twist: it’s on the floor thanks to its barrel-shaped design that lends itself to constantly rolling.

We’re also missing the helpful gestures that come with the second-gen Pencil. Double tapping the flat side of the newer Pencil can change brushes in certain apps, for example, and double tapping the display with the Pencil acts as a shortcut that brings the screen to life.

None of these extras are a part of the iPad Air 2019, and the Apple Pencil Gen 2 remains the one reason to think about splurging for the newest iPad Pro models.

And in 2019, we have more heavy-duty apps compared to when the first- and second-gen Air tablets launched. Photo and illustration apps like Affinity Designer, Adobe Lightroom and and Linea require serious horsepower for their multi-layer canvases, and the foreshadowing on apps like Adobe Photoshop for iPad and Adobe Project Gemini tell us they’ll be equally taxing if not more so.

Apple’s A12 chipset inside this iPad Air is fast, even if it lacks the laptop-threatening X-factor of the A12X used by the newest iPad Pros. The Air’s Geekbench multi-score is 11,575, and, yes, it’s shy of the Pro’s benchmark score of 18,104, but it’s nearly double the score of the iPad 9.7 at 5,786. There’s more than enough power here to run current and future heavy-duty apps.

Versibility at a fair price is the iPad Air 2019's best hidden talent. Its compatibility with Apple’s official Smart Keyboard Cover makes it the cheapest way to get that 2-in-1 form factor without having to struggle with a Bluetooth keyboard. The iPad Air contains the smart connector pins previously limited to the Pro tablets, and for that instant pairing action, we’re thankful.

The iPad Air becomes a more handy read-and-write tablet thanks to the Smart Keyboard Cover. It’s one that you can do real work on, not just read Apple News and consume Netflix. We’re also a fan of the fact that this new iPad can fast charge – if you spend more money by buying the lightning-to-USB cable and a compatible USB-C plug. iPads take forever to recharge without it.

The one multimedia feature you’re not going to find on the iPad Air that was found in the older (and now retired) iPad Pro 10.5 is the four speakers. This version is limited to two, which is an unfortunate, but not deal breaking downgrade.

Apple has reintroduced the iPad Air to the world, and it plays an important role in 2019, even if it doesn’t exactly introduce new technology in the process. It’s the choice iPad for people who want a little more from their tablet, especially artists and photo editors intending to wield an Apple Pencil. That’s why our one disappointment was that it uses the older Apple Pencil Gen 1.

Its fully-laminated screen makes sketching and photo editing feel more natural compared to the iPad 9.7, and its 2-in-1 Smart Keyboard Cover compatibility lends this tablet to read-and-write purposes. It’s a top productivity tool, even if it doesn’t have Pro in the name or jump to Pro prices.

The iPad Air has been resurrected to become Apple’s most balanced digital canvas, one that doesn’t compromises on performance, yet doesn’t push the boundaries of price. It’s a brilliantly sized tablet for drawing and photo editing, thanks to its bright and colourful laminated screen. We just wish it used an easier-to-wield second-gen Apple Pencil.