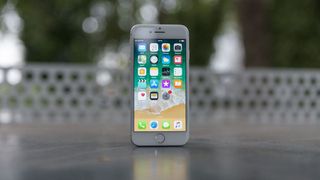 Leaked iOS 14 source code appears to have confirmed a rumoured new budget iPhone. A potential successor to the iPhone SE (Apple's previous low-cost iPhone offering), the new low-cost device is expected to feature a similar body and 4.7-inch display to the iPhone 8.

Based on the code (obtained by 9to5Mac), the new budget iPhone will support Touch ID as well as Express Transit, which allows users to pay for transport without unlocking the phone. Add these features to its diminutive form, and the new iPhone sounds like a contender for our best smartphones list.

The new phone is rumoured to be called the iPhone 9. Confused? Apple skipped the '9' moniker when simultaneously launching the iPhone 8 and iPhone 10 (sorry, 'X') in 2017, so we suppose it makes sense to plug that gap with a budget device. It sounds perfect for those who prefer a smaller phone, and might not need an LED display or countless cameras.

But now, the bad news. According to Cult of Mac, a source inside Apple claims that company has now postponed the launch of the iPhone 9 indefinitely, as well as cancelling its rumoured event on 31 March due to coronavirus fears. As well as the iPhone 9, Apple is expected to launch an updated iPad Pro, and an updated MacBook Pro. Apple's campus is based within Santa Clara County, where mass gatherings of over 1,000 people were recently banned for three weeks.

Even if the event is indeed cancelled, we could see Apple launch the new iPhone with a simple press release (as with the recent MacBook Pro 16-inch). If not, fans of smaller phones may have to cling on to that iPhone SE for even longer.

You can read all about the iOS code leaks on 9to5Mac.