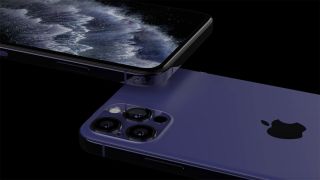 Apple's next range of iPhones has been the subject of much speculation and rumour, and news of an unexpected change to the handset design is the latest thing to cause a stir. Recent reports suggest there is going to be a significant update to the colour range available for Apple's next smartphones, predicted to be released in late 2020.

Apple will be scrapping its Midnight Green shade, and replacing it with a new Navy Blue finish across the pricier iPhone 12 Pro range. Granted the placeholder name is a little underwhelming, but the shade is bang on trend right now: Classic Blue is Pantone's Color of the Year 2020.

The new colour options would then be Space Grey, Silver, Gold or Navy Blue (name to be confirmed – we're hoping Apple goes for something a little more imaginative in its official release). This is pretty big news for Apple fans.

The story comes from industry insider Max Weinbach and has broken on the popular YouTube channel EverythingApplePro, run by Filip Koroy. Check out his renders of how the new shade might look below.

The decision is particularly surprising because it was the Midnight Green that sold out first when the iPhone 11 launched, suggesting this was the most popular shade. However, if Koroy's renders prove accurate, we think this replacement finish is going to look pretty sweet. Perhaps Navy Blue will be the colour to go for in 2020?

There's also more speculation surrounding the housing design on the 2020 iPhones. Previous predictions stated the iPhone 12 would adopt a more angular design that harks back to the iPhone 4, but recent reports suggest the iPhone 11's current, curvier casing will be sticking around a little longer – perhaps because a squared design is chunkier and more awkward to hold.

There's also more news on the expected sizing for the iPhone 12 range, which looks set to get a fairly major shakeup. Watch the video below for more details.

Check out TechRadar's iPhone 12 predictions page for everything else we know so far.