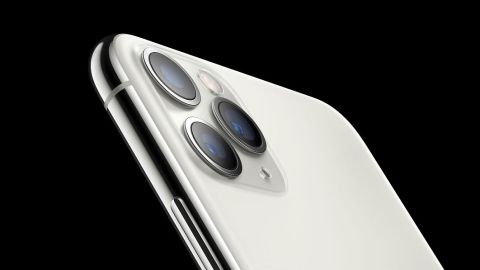 The iPhone 11 Pro and 11 Pro Max are incredibly expensive, but they are also fantastic phones across the board. Apple has finally stepped up to the plate with its latest camera, and when combined with the brightest screen around and zippy performance, we can’t help but be impressed.

With the new iPhone 11 Pro and iPhone 11 Pro Max having what some might call an astronomical price tag, Apple’s latest flagship phone needs to be sensationally good.

It doesn’t look particularly new or fancy from the front though. With its big screen and visible black border all the way around and a hefty notch, it’s got a virtually identical fascia to that of the iPhone X or iPhone Xs. Adding to that familiarity, all iPhones run the same operating system, iOS, so look identical on the inside. So why would you pick up an iPhone 11 Pro over an older model? The answer is simple – the camera.

Apple has taken inspiration from Android phones and loaded up three cameras around the back of the iPhone 11 Pro models. It's also added a fantastic night mode to its imaging mix. In doing what Apple does best – refining tech introduced by other manufacturers, it has, in turn, created one of the best camera phones in the world today. But for the kind of money these phones cost, is that really enough?

If it’s design your after, these iPhones aren’t worth an upgrade.

The iPhone 11 Pro-series delivers deja-vu in spades from the front. That said, around the back, Apple has shaken things up a bit by swapping out the iPhone Xs’s shiny rear panel for a frosted glass finish, and adding a squircle camera surround.

Much like the Google Pixel 4, the new iPhones’ matte glass back repels fingerprints like a champ, and looks cleaner than high-gloss counterparts like the Samsung Galaxy Note 10 Plus, which gets grubby after little more than a glance.

The 11 Pro-series is also available in four colours, Space Grey, Silver, Midnight Green and Gold, and all of them look refined. Is this the best-looking phone money can buy? Probably not, but it is the best looking iPhone and for Apple fans, that’ll be enough

Despite the fact the phones are water-resistant, so can handle a dunk and splash, Apple’s dropped the ball when it comes to the screen’s scratch-resistance, in our experience. Complaints about early iPhone displays scratching have been cropping up since the phone launched and we’ve experienced this first-hand. With this in mind, you might want to go for a screen protector even if you don’t decide to put your iPhone in a folio case.

As for the screen quality, it’s beautiful. Punchy, vibrant, incredibly bright, deep, rich and with excellent viewing angles, the new Super Retina XDR panel ticks all the boxes. Talking specs, it delivers a 2,000,000,000:1 contrast ratio, so images, videos and illustrations look as good as they possibly can on a smartphone, and with support for HDR photos and HDR10 films, if you’re a content creator, the iPhone 11 Pro will showcase your creations to perfection.

The biggest reason to upgrade to the new iPhone 11 Pro-series is the camera experience. The primary camera is still 12MP resolution with an f/1.8 aperture and optical image stabilisation (OIS), but Apple’s opted for a new sensor. The second camera features a 2x zoom f/2.0 lens and also has OIS, while the third is an ultra-wide 0.5x zoom lens with a 120-degree field-of-view.

To put it into context, that’s kind of like having a standard iPhone camera, a GoPro wide angle, and a 50mm portrait lens in your pocket. What’s special about Apple’s implementation of all three cameras is that they match colour balance, exposure and contrast levels well. This results in a seamless, intuitive photo-taking experience and images that look great almost every time.

It isn’t just shots taken in good light that impress; dynamic range is excellent across lighting conditions, and Apple’s iPhone 11 Pro can shoot long-exposure night shots too. We were able to capture 30-second exposure times when we steadied our review sample on a surface, and while the results aren’t quite as mind-boggling as Google’s Astrophotography which can literally turn night into day, they weren’t far off. Handheld low-light photography also impresses, and in certain situations, outclasses the best of the rest, including the Pixel 4.

The phones’ portrait mode is also one of the finest around, clearly and naturally separating background and foreground objects. This works across both the main and zoom cameras, and comes bundled with a host of portrait lighting effects.

Alongside the Huawei P30 Pro, which has better zoom performance, the new iPhone is the best video cameras we’ve used too. Its image stabilisation can deal with hand shake, so footage has a premium stillness to it, and low light performance is seriously solid for a smartphone. With a maximum recording resolution of 4K combined with a super-smooth 60fps, it’s sharp and gives filmmakers scope to slow things down when editing. If you really want to stop time, they also capture 240fps slow motion video at 1080p resolution.

Flagship iPhones always have stacks of power, so it’s little wonder the new internals in the 11 Pros will keep everything from 4K video edits in iMovie (included on the phone), through to Adobe’s on-the-go applications ticking over like a dream.

Storage capacities start at 64GB, just like the Pixel 4 and 4 XL, however, climb much higher, capping out at 512GB which is likely much more than most will ever need. Light users may be okay with 64GB, however, with that fantastic 4K video camera, we’d recommend creatives stump up the extra cash and go for the 256GB version.

The new iPhones don’t just better the Pixels when it comes to storage options, they finally offer decent battery life too, especially the iPhone 11 Pro Max which should last in excess of a full day for most. Charging them up is convenient thanks to wired and wireless charging, though Apple has stuck with its Lightning port for wired charging, which is a shame. We would have loved a USB-C port instead, bringing the iPhone in line with the new MacBooks, the best drawing tablets and iPad Pros - one cable to rule them all, we can dream. On the plus, an 18W fast charger ships in the box with the phone, which wasn’t the case with older generation iPhones.

With Face ID, you can get into the iPhone 11 Pro in moments, though, we would have loved a fingerprint scanner in the screen too. Why? Because Face ID is still awkward when you want to get into your iPhone and it’s on a surface, or use Apple Pay when your phone doesn’t have line of sight with your face.

Otherwise, the iPhone 11 Pro and 11 Pro Max are top-tier from a performance point of view; thanks to iOS 13, they deliver comprehensive app experiences and with stereo speakers tuned by Dolby, sound better than almost all other smartphone on the market.

The new iPhone 11 Pro and 11 Pro Max are both fantastic smartphones, but they’re also incredibly expensive.

If you can make do with two cameras around the back instead of three and a good, not world-class display, then the vanilla iPhone 11 offers much better value for money. We would have loved to have seen some creative elements added, like Apple Pencil support, for example – similar to that offered by the Samsung Galaxy Note 10, but maybe that’s one for the iPhone 11s?

Having said that, if all you want is the best looking, fastest iPhone around with a jaw-droppingly vibrant display and an excellent camera array, then even with their high asking prices, the iPhone 11 Pro is for you. Or the Max f you want something a bit bigger.

The iPhone 11 Pro and 11 Pro Max are incredibly expensive, but they are also fantastic phones across the board. Apple has finally stepped up to the plate with its latest camera, and when combined with the brightest screen around and zippy performance, we can’t help but be impressed.