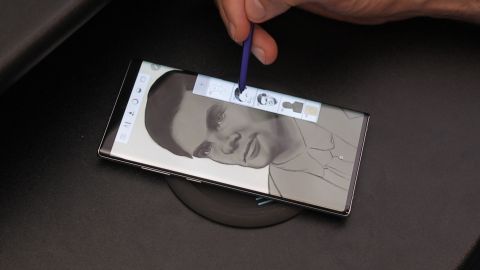 Yes, the Note 10 Plus is incredibly expensive, costing more than a 12.9-inch iPad Pro, but if you want the best pocketable pen experience around, it’s in a league of its own. The fact it’s also a fantastic smartphone with a stunning display, premium design and plenty of power only add to its appeal. Oh, and it still costs less than a comparably specced iPhone.

Samsung's Note line has been a favourite with creatives for years, given its size, power and fantastic pen support. The new Note 10 Plus set the internet on fire when it was announced. Not because it made a top spot in our list of the best camera phones around, or its maxed-out specs, gyroscopic S Pen or even its stunning display, but because of its colour and lack of a headphone jack.

The new Aura Glow colour, which makes the phone look like a unicorn has the back panel shimmering a different hue depending on how it grabs the light. Despite being a £999/$1,099 phone, Samsung took a gamble, and it paid off. The second headline-grabber – the death of the headphone jack, has been less well-received.

How much you care about either of these will be entirely down to you; do you use an opaque case? You won’t see that ethereal shimmer. Already happy with a headphone jack-free phone or don't mind the idea of Bluetooth cans? Great, get ready for some excellent penning.

With a 6.8-inch screen, the Samsung Galaxy Note 10 Plus is a giant canvas for that S Pen, stretching the limits of being pocketable, but it isn't quite as big as we thought it would be.

If you’ve seen an iPhone Xs Max, it has a 6.5-inch screen, and that’s probably the upper limit of what you’d want to be carrying around with you. Samsung has managed to squeeze a much bigger display into a similar-sized chassis, which is lighter than the Xs Max, by zapping the phone’s bezels, creating an all-screen, notch-free experience.

Taking centre stage is that curved AMOLED panel – it’s huge, punchy, vibrant and fills 91% of the phone's fascia, framed by a tiny border and interrupted only by a small, punch-hold front camera centred at the top of the phone.

At the bottom is a USB-C port, speaker grille, that retractable, spring-loaded S Pen, and on the left are all the buttons. The top is where you’ll find the dual-SIM card tray, while around the back is the quad-camera setup.

The Galaxy Note 10 Plus’ design isn’t just the pinnacle of Samsung’s smartphone legacy; it’s the best we’ve seen to date, with the polished aluminium frame melding beautifully into the Gorilla Glass curved back and front.

While there isn’t a case in the box, the Note 10 Plus is protected with IP68 water and dust resistance, and thanks to the pre-fitted screen protector, out of the box, you’ll have something safeguarding that screen.

As for the tech behind the display, the Note 10 Plus features a Dynamic AMOLED panel with a 19:9 aspect ratio and QHD+ resolution (1440 x 3040). Featuring HDR10+ support, it gets very, very bright, and very, very dark.

Blacks showcased by the Note 10 Plus look incredibly inky, deep and rich, making it perfect for watching content in low light with its 2,000,000:1 contrast ratio, and thanks to its supremely high brightness levels (up to 1200 nits), it’s easy to see what’s going on outdoors when using it.

Viewing angles are also stellar, and while it hasn’t got the highest refresh-rate around – 60Hz vs 90Hz on the OnePlus 7 Pro and 120Hz on the new iPad Pro (see our full iPad Pro 12.9-inch review for full specs), it's still a class-leading canvas for your creativity in terms of size and colour reproduction.

As with the last few generations of Samsung Galaxy Note, and the Tab S, the Note 10 Plus features a Wacom digitiser under the display, which, when coupled with the phone’s S Pen, supports 4,096 levels of pressure sensitivity.

This is combined with deep software integration with the phone itself. Pull out the S Pen from the bottom right of the phone, and a menu cascades up with shortcuts to S Pen functions like creating a new note, writing on a screenshot, translating on-screen text and more. You can supplement this menu with shortcuts to other S Pen apps, which can be downloaded through the Google Play Store.

The Notes app is handy, and thanks to excellent optical character recognition (OCR), the phone can index notes based on your handwriting, making them searchable. Taking this handwriting recognition a step further, the Note 10 Plus also features the best handwriting keyboard available on any smartphone.

While there are some new gimmicks like air gestures – you can wave the Note pen around to zoom in and out within the camera app, none of these add to the experience. The only handy feature in our experience was using the S Pen button as a shutter release when taking pictures, perfect for capturing group shots with your phone on a tripod or propped up on a surface.

What really sets the S Pen apart for us is how good it is for digital artists and illustrators. Its precision wipes the floor with that of its main competition, the Huawei Mate 20 X and its M Pen, latency is low, and you can work on much larger files than ever before without slowdown. We exported a multi-layered PSD file that was around 12.8MP and 90MB, working on it with virtually no lag over four hours.

If you’re happy with Sketchbook for starting off projects and Samsung Notes for casual doodles, therefore, the Note 10 Plus is like having a pin-sharp Wacom Cintiq in your pocket. You can see an example illustration below:

As with the Note 9, you can tilt the S Pen for intuitive shading, provided you’re working within an app that supports the feature. And if you want a more traditional drawing experience, the Staedtler Noris Digital is a compatible stylus that looks and feels just like a pencil, and can be had for around £20-30.

The nuts and bolts of the Samsung Galaxy Note 10 Plus user experience is powered by Android 9 with Samsung’s One UI over the top. That means excellent app support, though not quite as good as the iPad from a pen point-of-view.

The core UI is comprised of home screens that can be customised, along with a Bixby Home display to the left, which serves up a feed of things Samsung thinks you should care about – local highlights, fun gifs etc.

It’s a familiar, highly customisable and high-quality UI, and you can scale back things you don’t care for, like Bixby, for example, or even overlay a new interface over the top - 'a launcher' - Android is flexible like that.

With smart features like Samsung DeX to play about with too, the phone can be hooked up to a big screen to deliver a desktop interface on a TV or monitor with an HDMI adapter. This feature also extends to computers, so you can now create a window within your computer that gives you access to the phone. Neither are particularly fantastic for actual productivity, especially creative work, and we ignored them after testing them out.

The Note 10-series carries forward the 12MP dual-aperture main camera introduced on the Galaxy S9 and combines it with a 2x zoom 12MP camera and an 0.5x zoom, ultrawide 16MP camera. Finally, the time of flight (ToF) camera helps with depth sensing to create better effects when blurring out the background of portraits and Live Focus photos and videos.

Results across lighting conditions are very good, with detail consistently high and images looking poppy and saturated out of the camera. There are plenty of shooting modes, including Pro mode, so you can take control of your shooting experience, and the phone shoots RAW photos too.

While low light photography isn’t quite as well handled as on the Huawei P30 Pro or Pixel 3, and there’s no 5x periscope zoom as found on the Oppo Reno 10X's camera, the Note 10 Plus still manages to deliver an excellent, multi-purpose imaging experience across lighting conditions. Thanks to the combination of optical and electronic image stabilisation, it also shoots brilliant videos at up to 4K resolution, 60fps, as well as up to 960fps slow motion at Full HD resolution.

A considerable amount of power and storage sit inside the Note 10 Plus' elegant frame, making it about as future-proofed as you can get right now. Specs include an Exynos 9825 processor combined with 12GB RAM and 256GB storage. That’s more space for your files, photos and games than found in some premium laptops, and you can boost it with up to 1TB thanks to microSD card expansion. If you opt for the 5G version, you can even pick it up with as much as 512GB storage, though the maxed-out model will set you back £1,199.

The phone’s 4300mAh battery easily gets it through a full day, and with its supplied 25W charger, the Note 10 Plus powers up from 0-100% in just over an hour, which is fast, especially when compared to the three hours 30 minutes charging time of the iPhone Xs Max when using the in-the-box charger.

Samsung Galaxy Note 10 Plus: Should you buy it?

If you’re a creative who draws, there’s no competition; the Note-series is the only real choices when it comes to phones with excellent pen-input out of the box. Compared to the standard Note 10, the Note 10 Plus is significantly bigger, has a sharper screen, better battery life, more optional storage and RAM, as well as a ToF depth camera. The main selling point of the Plus for us is the larger screen to draw on and its extra resolution.

That said, if you’re not looking for pen-input, then there are plenty of excellent Android phones that undercut it, not least of all the Huawei P30 Pro (£799), OnePlus 7 Pro (£649) and the Samsung Galaxy S10 Plus (£799), and if you're happy with last season's model, the Note 9 is still a fantastic choice.

Yes, the Note 10 Plus is incredibly expensive, costing more than a 12.9-inch iPad Pro, but if you want the best pocketable pen experience around, it’s in a league of its own. The fact it’s also a fantastic smartphone with a stunning display, premium design and plenty of power only add to its appeal. Oh, and it still costs less than a comparably specced iPhone.