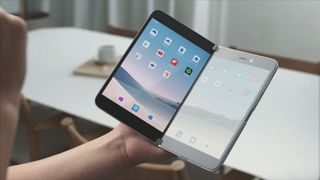 The Microsoft 2019 event came to a close just a few hours ago, and it's fair to say the company has been pretty busy recently. During the almost two-hour event, Microsoft revealed six new and updated products, which was super-exciting (and the arrival of which means we're no doubt looking at some cracking Black Friday Microsoft deals this year).

Speculation about a dual-screen device being revealed at the event has been rife over the past few months, and we were fully expecting to see a dual-screen laptop surface (no pun intended). But Microsoft had other ideas, and very impressive they were too, we have to admit.

First up, it announced not just one, but two dual-screen devices. The first being the Surface Neo, an exceedingly cool-looking dual-screen tablet. But what came next was what looks like Microsoft's niftiest device to date, the Surface Duo. On this new foldable phone – sorry, "communications device" – Microsoft partnered with Google to bring to market what Panos Panay, chief product officer of Microsoft Corporation’s Microsoft Devices group, referred to as "the best of Android in one product".

The handheld device boasts two 5.6-inch displays, which are joined by a centre hinge, and fully unfolded lie flat as a 8.3-inch (diagonal) surface. The design is clearly the selling point here, Microsoft was much more reserved on other details (such as price, for example). We do know that it's powered by a Qualcomm processor, the Snapdragon 855, and of course, runs on Android.

But we can't ignore the design, which is unlike anything we've ever seen, and the appeal of which we're sure Microsoft is counting on to keep consumers' interest. The Duo adds to a feeling of growing functionality crossover between devices, so we're interested to see exactly who Microsoft is aiming the Duo at and how and when it would be more beneficial than say a Surface Pro or an iPad (aside from the obvious portability and phone capabilities). But we've got high hopes, and who knows, maybe we'll see it top our list of the best camera phones one day?

Microsoft commented on the new device in its blog post: "With Surface Duo we are building upon Android to marry cutting edge hardware with familiar software and services. We’re excited to work with developers and the industry to create the next wave of dual-screen computing and unlock a new era of mobile creativity." And of the overall Surface range, Panay said: "These new products are about empowering you to be your most productive, and your most creative."

So far there are very little details around when the Surface Duo will be available to buy, with Microsoft simply saying 'Holiday 2020'. If you can't wait that long for the new Surface range to hit the shelves, here are the all the top current models at the very best prices in your area: