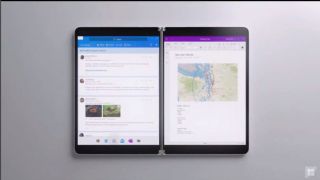 Microsoft has certainly upped its game in recent years, and the Microsoft Surface range has become a firm favourite among artists and designers. So much so, the Surface Book tops the list in our roundup of the best laptops for graphic design and the Surface Pro 6 maintains a firm position in our pick of the best tablets with a stylus.

However, the company has just taken things to the next level, as yesterday it announced a whole slew of new products at its Microsoft Event in New York. We'll be breaking down all the new devices and what they offer over the next few days, but for now we're going to concentrate on one of the really cool bits: Microsoft's new FOLDABLE tablet, the Surface Neo. There's also a dual-screen phone, the Surface Duo.

This is also good news for those who are looking for discounts on older products, as Black Friday Microsoft deals are bound to be abundant in just a few weeks.

The Surface Neo is essentially a dual-screen foldable tablet, which houses the Surface Pen in the back. It includes a magnetic foldable keyboard, and there's even a trackpad. In short, it's got all the accessories you'll ever want in a tablet, but they all fold away nicely into one nifty little device.

The Surface Neo also looks good (seriously, watch out, Apple). It is 5.6mm thin, and includes the thinnest LCD ever created. It weighs just 655 grams and has a 360 degree hinge, which we severely hope will be strong enough to withstand being flipped around all day (let's hope it won't be a repeat of Samsung's foldable phones).

The Surface Neo is powered by Microsoft’s new OS, Windows 10X, which has been designed especially for dual-screen devices such as the Surface Neo. It also boasts a new Intel Lakefield processor, which includes an 11th Generation Intel graphics solution.

The Surface Neo consists of two 9-inch screens  and the neat part is that apps adapt across the two screens, meaning that they display content in a sensible and logical way across both screens (or so we saw at the demonstration).

Why would you want a two screen tablet? Well, you might want to open the link in an email on a second screen to look at later. You might be watching something on Netflix, only to receive a phonecall or remember you need to do something on your email. That's when you can easily move your Netflix screen to the other screen, and you can even choose what portion of the screen it takes up.

You can choose, for example, to have your content in the 'Wonder Bar' – like a Touch Bar on the Mac but much bigger, and with emojis – while you deal with something else.

Basically, what we're saying is, you could be watching Netflix while you answer your emails or create in a drawing app, for example. Or you could be doing two things at the same time, on the go, in lots of different configurations.

Microsoft talked a lot about being in the "flow" at the event, and we can see how a device like this will help seamlessly switching between tasks. The speakers also talked a lot about symphonies, and although we'll probably wait and see before we invest in the entire "orchestra" of products, we're pretty convinced that the Surface Neo will be worth checking out.

The Surface Neo is coming in "holidays 2020". We'll assume that means it'll be available around this time next year. But rest assured we'll be keeping a close eye on it and will report back with any new details as and when they arrive. Microsoft hasn't allowed us to preview the product just yet, presumably because it's so far away from launch, but we'll be getting a hands-on review as soon as we can.

If you can't wait that long to get your hands on a Surface device, or one screen is more than enough, here are the best prices on other models in your area.