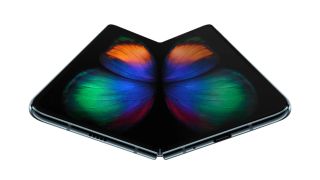 Earlier this week Samsung sent out the first review models of its foldable Galaxy Fold. Sadly, it's not just the boundaries of tech that got broken – multiple reviewers have reported issues with the screens already.

The smartphone, which comes with a eye-watering $1,980 price tag, features a 7.3-inch Infinity Flex Display that literally folds in half to create a much more compact device with a cover display. However, it seems the device is a long way from entering any best smartphones rankings, as the screen technology isn't quite as robust as you might hope.

Dieter Bohn, from The Verge, noted a small bulge under the screen of his phone, near the hinge. He speculated it might be caused by a piece of debris getting in through the hinge joint. The bulge eventually caused the screen to break after a single day of use.

CNBC.com tech editor Steve Kovach didn't have much more luck with his model, with half the screen starting to violently flicker and the other half dying entirely after just one day of use. A video shared by the business news body commented that it had been told by Samsung the Fold would last "hundreds of thousands" of open and close cycles. Not quite.

Mark Gurman, from Bloomberg, reported that his review unit had completely broken after just two days. There was a similar story from YouTube reviewer Marques Brownlee.

There were questions over whether the issues could be traced back to the removal of a film layer on the display (some reviewers had mistakenly taken the film off their Galaxy Fold, thinking it was a standard screen protector), and on Wednesday, a Samsung spokesperson started asking reviewers not to remove the film. However, the film was left intact on the faulty CNBC model, so this clearly isn't the source of all Samsung's woes.

Preorders on the phone opened last weekend, and general retail release is scheduled for 26 April. Samsung says it will still go ahead with its projected on-sale date. Optimistic.

So far there's been no light shed on what caused the devices to break so quickly. You can read Samsung's statement in full below.

"A limited number of early Galaxy Fold samples were provided to media for review. We have received a few reports regarding the main display on the samples provided. We will thoroughly inspect these units in person to determine the cause of the matter.

"Separately, a few reviewers reported having removed the top layer of the display causing damage to the screen. The main display on the Galaxy Fold features a top protective layer, which is part of the display structure designed to protect the screen from unintended scratches. Removing the protective layer or adding adhesives to the main display may cause damage. We will ensure this information is clearly delivered to our customers."

The tech giant has form when it comes to releasing tech that's, let's say, not quite as ready as it should be. Who can forget the Galaxy Note 7, which had to be recalled entirely when the batteries started exploding. Although the race to be the first to release a foldable screen has been hotly contested, this seems a clear warning of the dangers of getting out a product before the tech is fully ready.