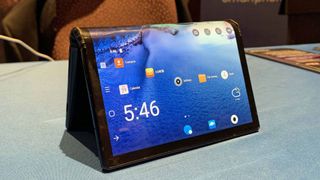 Royole has unveiled its FlexPai – the world's first foldable phone – at the CES 2019 trade show. While the benefits of having a phone that folds remain hazy, electronics companies have been tripping over themselves to get one out for some time now. In a surprise move, relatively unknown startup Royole has overtaken the likes of Samsung to be the first to get an actual flexible phone onto the market, and it could be a contender for the best smartphone in 2019 crown.

The Royole FlexPai is a 7.8-inch phone with a flexible AMOLED screen. We first heard of Royole's foldable phone in October 2018, when the company announced the FlexPai would go on sale for around $1300 just a few days later. Prior to the news, big players such as Samsung, LG and Huawei were the big names in the race, but none had managed to get their efforts to market.

Originally debuted at an event in Beijing, a demo at the CES trade show currently running in Las Vegas was the first chance for a major audience to see the flexible phone in action. CEO Bill Liu wowed the audience by demonstrating how the FlexPai could be folded from a 7.8" tablet into a smartphone with displays on two sides.

Liu also announced some details about the revolutionary phone. When folded the FlexPai offers two screens: one with a 16:9 aspect ratio and the other a wider 18:9. It's powered by Qualcomm's new Snapdragon 855 chipset and runs Android's Water OS, which supports the split-screen mode. It also includes two cameras (including one 16MP wide-angle lens) that work as both rear and front cameras, depending on how the phone has been folded.

Sadly, early reviews suggest the FlexPai is still a little rough around the edges – it's not a contender for the best smartphone for designers quite yet.

What do you need with a foldable phone? Well, flexible accessories of course. As well as showing off its competition-beating FlexPai, Royole has used CES 2019 to reveal a flexible keyboard, bendy speaker, and smart selfie stick, all featuring thin, foldable displays.

The bendy QWERTY keyboard connects to your phone via Bluetooth and can be laid on any smooth surface. The cool part is that when you're done typing, you can roll it up and pop it in your bag, or pocket. The keyboard works wirelessly and Royole promises impressive battery life.

As well as the bendy keyboard, Royole showed off a smart speaker with a 7.8" AMOLED flexible touchscreen. Users swipe and tap the screen to play music or watch movies. The device also includes an 8MP camera that pops out of the top and rotates 180 degrees.

Whether these flexible devices are part of a passing fad or set to become a stable of the smart office of the future remains to be seen.