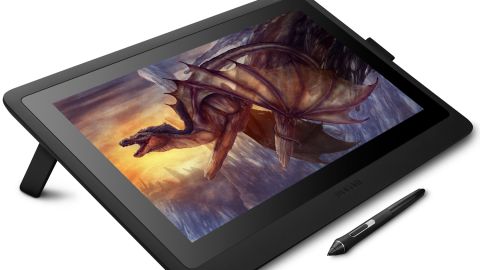 The price is going to make the Wacom Cintiq 16 a must-have product for any digital artist wanting to move up from an Intuos or other non-drawing screen graphic tablet. If you don’t need a higher colour gamut and touch isn’t for you, then this is an option worth considering.

The Wacom Cintiq 16 is Wacom’s least expensive pen display tablet so far. Aimed at students, enthusiasts graduating from the Intuos line, and jobbing creatives who can’t justify the price of a Cintiq Pro, the new Wacom Cintiq 16 offers a cheaper way for artists to master Wacom’s industry standard drawing tools.

In years gone by, Wacom was the only real choice for artists wanting a drawing tablet or creative display – and the Cintiq range has alway dominated in that area. Fast forward to today and there are numerous options to consider in all price range, from the seldom heard of Artisul D13 across the spectrum to the Apple IPad Pro and Apple Pencil.

Now the Wacom Cintiq 16 has arrived and it's going after a very specific market, with the headline feature being the price. A 1920x1080 display, a Pro Pen 2 and 72 per cent colour gamut are all fairly standard features, but the Wacom Cintiq 16 boasts 8,192 levels of pressure sensitivity, the ability to use the newer Pro Pen 3D and very minimal parallax, all at the lowest price we've ever seen for a Cintiq.

It’s also cheaper than the iPad Pro, which costs from $799 / £769 and at the moment doesn’t run pro creative programs such as Photoshop (though it should soon), or come with the Apple Pencil. That'll cost you another $99 / £89; whereas the new Cintiq 16 comes bundled with the Wacom Pro Pen 2.

Clearly, Wacom is looking to take on the growing market of cheaper Wacom alternatives that has developed over the last few years: Huion, XP-Pen and so on. These companies are producing excellent pen display and graphic tablets, and have found a loyal fan base thanks to their much cheaper price points.

Wacom still doesn’t win on price with the Cintiq 16, but it’s dramatically closed the gap – and it has the excellent Pro Pen 2 stylus up its sleeve. Most competitor pens top out at 2,048 levels of pressure sensitivity, compared to its 8,192.

The display is 15.6-inches diagonally and has a screen resolution of 1920x1080 (full HD). It has a TFT (thin film transistor) liquid crystal display (LCD) and, rather than an etched glass screen, this one has an anti-glare textured overlay. The onscreen feel is a very personal choice and if you love that 'sliding on glass' feel that you get with Pro models and the iPad Pro, this model is not for you.

It might not be as bright as the Cintiq Pro but it certainly didn’t feel like an issue in normal studio working conditions. It has a colour colour gamut of 72 per cent as opposed to 94 per cent (or higher) as stated for the Cintiq Pro and the Artisul D16 pen display. That's certainly going to put a certain group of user off, perhaps pro photographers or those working in the higher end of the design market.

There are flip out legs on the rear of the Cintiq, which allow you to work at a 19-degree angle. As with the larger and Pro model, there is no stand, but Wacom has created one for this range. There are no express keys on this model and Wacom doesn’t include the Express Key remote, but it is compatible.

The Pro Pen 2 has always delivered in terms of sensitivity and build quality. As with most pens in the Wacom family, you don’t have to charge them and that can’t be said for close competitors like the Huion KAMVAS and, of course, any of the Apple Pencils. Huion has started giving out two Pens with the latest models, which would help, but a chargeless pen will always be the gold standard.

The Cintiq 16 works with the Pro Pen 3D (sold separately), which is worth purchasing if you do a lot of 3D modelling and find an extra button is needed. There is a slide-out pen holder on the right side of the Pro Pen 3D, which can store spare nibs and a tool to remove them from the Pro Pen. The 8,192 levels of sensitivity is the same as the Pro line.

There is a single cord coming from the top of the Cintiq, which makes the whole experience feel tidier than products with side connections. That single cable splits into USB-A, a HDMI and power lead. If you have a newer laptop with USB-C or even a machine with a display port, you're going to need an adaptor for the HDMI connection. There's only a single power button on the top right of the screen, keeping it well out of the way of accidental button presses.

The Wacom Desktop Center gives you access to control brightness, contrast and colour temperature. This means you can tweak the screen to your personal preference without on-device buttons, but you aren’t going to get the black levels of an etched glass machine.

One of the noticeable features that has been dropped for this model is touch. This may be a deal-breaker for photographers and artists coming from an iPad, but digital sculptors using programs like ZBrush aren’t going to be worried by the lack of touch. Using Touch is great in Photoshop for zooming and rotating but it won’t be a problem for creatives new to the industry, especially when you consider the price leap to have that feature. Time will tell but it's doubtful the lack of touch functionality will affect the popularity of this new model.

Wacom Cintiq 16: Should you buy it?

Wacom has focused on creative professionals for over three decades. Before this release, if you wanted to experiment with a Wacom pen display, you needed to fork out at a pro-level price point. But the new Wacom Cintiq 16 changes that.

This new model will appeal to artists about to upgrade from an Intuos, and possibly concept artists who aren’t too worried about the RBG Gamut. Photographers and higher end designers might still think that the extra features of the Cintiq Pro line are essential for them, but the price difference is huge.

And it really isn’t a Cintiq Pro: you don’t get the UHD resolution, multitouch control or as many connectivity options. It isn’t as portable as a Surface Pro or iPad Pro either

But build quality appears similar, and for less than half the price of the 16-inch Pro version you get what looks to be a very capable pen display. Importantly, you also get access to Wacom’s industry standard drawing tools: these are the displays you find in most animation and special effects studios. If you’re a cash-strapped creative pro, the Wacom Cintiq 16 is  definitely an option worth considering.

The price is going to make the Wacom Cintiq 16 a must-have product for any digital artist wanting to move up from an Intuos or other non-drawing screen graphic tablet. If you don’t need a higher colour gamut and touch isn’t for you, then this is an option worth considering.