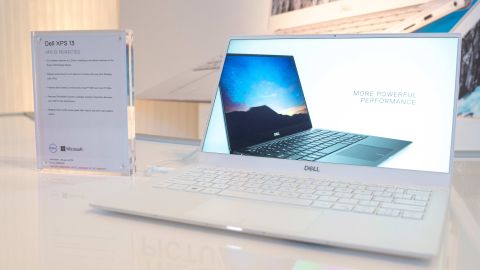 The new Dell XPS 13 (2019) finally moves the webcam to its rightful position above the display, helping this mobile powerhouse retain its title as the best 13-inch laptop on the market. [Full review score to come.]

This is a hands on review of the Dell XPS 13 2019 (9380) to give you the chance to see what the new laptop is all about as soon as possible. We'll be expanding and upgrading this review shortly with more information and a score.

'Hands on reviews' are a journalist's first impressions of a piece of kit based on spending some time with it.

The Dell XPS 13 has been updated for 2019 with some key changes that makes one of the best laptops even better.

Launched here at CES 2019, the Dell XPS 13 (2019) is faster and more powerful than ever, thanks to new eighth generation Intel Whiskey Lake CPUs.

Crucially, Dell has addressed last year’s biggest complaint and ditched the ‘nose cam’, moving the webcam up above the display instead of sitting on the bottom bezel. But by-and-large, much about the Dell XPS 13 remains the same – and that’s a good thing.

The biggest visible change to the Dell XPS 13 is the webcam has been moved from bottom of the display – where it became dubbed ‘nose cam’ – to above the display. To do this, Dell’s re-engineered the webcam, shrinking the housing from 7mm down to just 2.25mm, and making this Dell’s smallest-ever webcam. It uses a 720p widescreen sensor with four far-field microphones, and has temporal noise reduction to help make images clear.

The hinge mechanics have also been improved, making the Dell XPS 13 easier to open with one hand. And a new colour has been added to the collection: frost silver joins the existing rose gold and arctic white, and black and silver options.

Finally, you get two Thunderbolt 3 ports, one USB-C 3.1 port, a microSD card slot for expanding the memory and a 3.5mm headphone jack, plus a wedge lock slot for securing your laptop.

What’s new this year is a touchscreen option for the FHD model – before this was only available on the 4K version. There’s also support for Dolby Vision, which Dell says can make highlights in images 40 times brighter and blacks 10 times darker, compared to a standard picture.

Armed with new options for eighth generation Intel Whiskey Lake CPUs, plus a dual-core i3 model to start, the Dell XPS 13 has more power for multitasking, and should keep you going for a few years. Memory options range from 4GB to 16GB, and SSD storage from 128GB to up to 2TB.

The company claims a massive 21 hours of battery life for the Full HD display and Core i5 version, and up to 12 hours for the 4K with Core i7 model. Is that too good to be true? We’ll test how well they hold up when we do our full review.

The Dell XPS 13 was already an excellent laptop. The biggest change on the new Dell XPS 13 (2019) is the repositioned webcam, but the addition of Intel Whiskey Lake only reinforces its best-in-class reputation.

Bear in mind that the XPS 13 doesn’t have the graphics performance of the larger Dell XPS 15. This isn’t a laptop for serious video editors or gamers.

But if you’re a photo editor or a creative specifically looking for something lighter, more mobile, with a better battery life and still promising great colour accuracy, the Dell XPS 13 (2019) initially looks stunning. We’ll bring your our full review soon.

The new Dell XPS 13 (2019) finally moves the webcam to its rightful position above the display, helping this mobile powerhouse retain its title as the best 13-inch laptop on the market. [Full review score to come.]