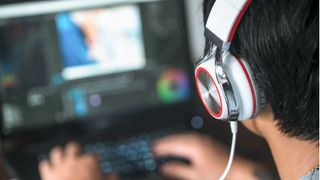 Of course, all of these laptops are able to run the best video editing software, including Adobe's Premiere Pro, and that's because of the powerful hardware they contain. So, they'll have powerful multi-core processors, plenty of memory and lots of storage as well.

In fact, quite a few companies that specialise in gaming laptops, like Acer and Razer, also make laptops designed for creative professionals. These laptops use the same powerful hardware you'd find in a high-end gaming device, but without some of the game centric features (and garish designs).

With lashings of CPU and graphics power, they’ll chew through the best digital art software and encode videos faster than any standard laptop, and you'll find them included in this list as well.

The best laptop for video editing

Apple has also updated the hardware within the new MacBook, so there's some seriously powerful components in there, including professional graphics cards from AMD - again, essential for video editing. You won't find a better laptop for video editing in 2020.

Great performance at a brilliant price

The current HP Envy 13 deserves its title as the one of the best all-round video editing laptop. It has an elegant, lightweight design, weighing just 1.3kg, with a great keyboard and a FullHD screen.

And it’s also cracking value for money, with even the more affordable variant packing plenty of performance, with a quad-core processor, full HD display, discrete graphics and enough storage and memory to handle video editing.

Bump up the spec and you get more memory, a bigger SSD and a faster 4GHz Intel Core i7 processor. Although it’s probably not up to the job of editing 4K video, it will certainly handle 1080p footage without complaining, and without breaking the bank

The 15-inch MacBook Pro is now available with 8 processor cores.

One of the most powerful and flexible video editing software packages is Apple’s Final Cut Pro, but it only works on Macs, and it runs brilliantly on the 15-inch MacBook Pro.

In 2019, Apple upgraded its entire range of MacBook Pros with faster Intel processors, packing even more video editing performance into what is a very compact design, weighing just 1.83kg and measuring 1.55cm thick.

The 15-inch model is now equipped with either a six or eight-core Intel Core i9 processor running at up to 5GHz Turbo, certain to chomp through even 4K video.

The upgrade options include AMD Vega 20 graphics with 4GB of HBM2 memory, which is significantly faster than the Radeon Pro 560X graphics in the base model, along with up to 4TB of storage and up to 32GB of memory. It’s also worth mentioning the TrueTone Retina display on the 15-inch MacBook Pro looks really good, and is great for any kind of visual design work.

While Apple has since released a more powerful 16-inch version (included in this list as well), the 15-inch model is a good compromise if your budget doesn't quite stretch to what Apple is charging for the larger model.

The Acer ConceptD 7 is a powerful video editing laptop that features some of the best, and most recent, mobile components money can buy right now. It's easily one of the best laptops for video editing thanks to its Nvidia RTX graphics cards, which brings the kind of firepower you'd usually find in a gaming laptop, but to a device aimed at video editors.

Add in cutting edge Intel processors and bags of RAM, and you've got a seriously powerful laptop. It's also a fantastic video editing laptop due to its gorgeous Pantone-validated 4K IPS display, which ensures your videos look their best with vibrant - and accurate - colours. It's a fantastic Windows 10 alternative to a MacBook Pro, and it comes with a better selection of ports as well. It's expensive, but well worth the investment.

Not to be confused with the 2-in-1 Inspiron laptops, the brand new 14-inch 5000 series is a standard laptop design that offers an eight-generation Intel quad-core processor and discrete graphics card together with a 1,920x1,080 IPS display, to offer some excellent video editing performance.

Best of all, the price for the entry level configurations starts at $649.99, which is more than reasonable for a video editing rig. SSD storage options, a Core i7 processor and an additional hard disk are among the available upgrades, making this laptop even better for video editing.

Razer is a well-known name in gaming laptops, and it's used its expertise in creating powerful and mobile gaming laptops to create the Razer Blade 15 Studio Edition, a powerful mobile workstation that has been designed with video editors in mind.

This means it comes with a powerful Nvidia RTX graphics card, and a factory-calibrated 4K display, giving video editors incredibly sharp content but also lots of space to work on while they’re editing on the go.

It is very expensive, though.

One of the best is now even better

You don't need to be in the film industry to know that the sequel is rarely as good as the original. But quite unlike Jaws, Speed and The Exorcist, the Microsoft Surface Book 2 is a definite improvement on the first generation.

In fact, the Microsoft Surface Book 2 is a mere whisker away from toppling the XPS 15 for best Windows laptop for video editing. But when it comes to 2-in-1 laptop-tablet hybrids, there are none finer. Give the 15-inch screen a tug and it satisfyingly detaches from the keyboard, enabling you to use it as a huge tablet. Handy if you have a work in progress that you want to pass around a table. But, coming with the Surface Pen stylus, it also means you can get more control using the touchscreen for seamless video edits.

Study the Surface Book's spec sheet and it impresses at every line. The 3,240 x 2,160 resolution display is sharper than the majority of laptops on the market (including every MacBook in existence) and 4K footage will look just how you imagined it. The presence of the GPU and Nvidia GeForce chipset gives it yet a further boost in the graphics department, while the stacks of RAM and state-of-the-art Intel processor (all configurable) make it a processing monster.

If the words of praise keep getting drowned out by volume of the price tag, then the original Surface Book is still available and would still make a more than competent companion to any video editor. You have to settle for a 13.5-inch screen, but the savings can reach as much as a grand.

The MacBook Air used to just be known as Apple’s most affordable Mac, but only capable of basic video editing. That all has changed. The newest MacBook Air now has a high-resolution display, faster 10th generation Intel Core processors and more memory, all of which make a big difference to its video editing credentials.

It's all wrapped up in a lightweight design that Apple has perfected, making it an ideal video editing laptop for people who travel a lot.

MSI has delivered the goods here with the Prestige P65 Creator, a fantastically light laptop that looks as great as it performs. An optional six-core Intel processor, Nvidia GeForce graphics card (up to a GTX 1070) along with 16GB of memory will make your footage render at super fast speeds. It has some great visual touches, with chamfered edges around the chassis, and a lovely large trackpad. If you snag the limited edition version, you can get a 144Hz screen as well.

It isn't easy to find a decently specced laptop with a large screen and still get change from £500/$500. But that trusty stalwart HP has somehow managed to produce a cheap laptop that isn't a disaster zone: the HP Pavilion 15. This isn't one for the pros, but if you're a beginner or keen amateur learning the ropes of video editing, the Pavilion is a good choice. Even the entry-level models have loads of storage for rolls of footage, and a little extra cash can get you more RAM, a better Intel processor or a full HD display.

Power at a price you can afford

However, because prices of high-end hardware are getting more affordable, it means you can find a great video editing laptop without breaking the bank. You might be confined to just editing 1080p footage, but for many people that will be absolutely fine.