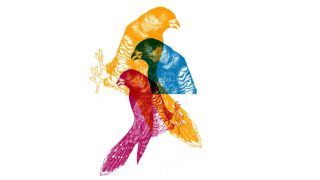 Illustrators have long enjoyed a love affair with screen printing. Aside from being a creatively fulfilling process, screen printing can also open new revenue streams – with illustrators able to sell multiple limited-edition prints for art lovers' interiors without a huge price tag.

The screen print medium is perfect for illustrators to explore through side projects, running alongside freelance or full-time work. Fresh and experimental ideas can be explored, and then sold via your personal website, Etsy, within galleries or elsewhere online.

If you'd like to try it yourself, check out Get Started with Screen Printing. In the meantime, here are some great examples of screen printing to inspire you...

Rose Blake is a graduate from Kingston University and the Royal College of Art. She has gone on to become part of the This Is It collective and runs the website Studio Music. Her hand pulled screen prints are characterised by a whimsical drawing style that packs plenty of wit and sincerity.

Joe Wilson honed his print skills at Leeds Metropolitan University and went on to develop a style that harks back to woodcut printing. Thanks to a keen attention to detail he has scooped awards and landed commissions from a range of big brands. This piece, Birds Overlay, is a prime example of his draftsmanship and creativity in action.

Holly Wales is a London based artist who describers herself as an "illustrator and educator". Her prints are mainly based on hand drawn illustrations that are built up with multiple colourful layers. This print inspired by the 1967 film The Graduate showcases how Wales can combine different elements into one strong overall composition.

Often found trawling through the vintage shops of Brighton for inspiration, Steve Wilson has an eye for the experimental. He describes his work as being "somewhere between pop and psychedelia", and it's easy to see what he means in this shockingly vibrant print of a Polaroid camera. We can't help but admire how long it must have taken to line up this intricate print.

Ben Rider's punk inspired prints are bursting with energetic colours thrown together with a pleasingly rough composition. His distinctive style has seen him work for the likes of Film 4, Heineken and Samsung, yet he still finds the time to teach. By creating work by hand Rider hopes to stand out from what he describes as a homogenised slick corporate world.

Having studied both printed textile design and printmaking, Clare Halifax's screen prints combine her interest in textiles with her highly detailed drawings of architectural landscapes around Britain. Flat patterns always feature in Clare's limited edition screen prints evoking visual elements such as sea and sky. Clare's prints are sold internationally and in galleries and shops across Britain.

Using screen printing as a predominant medium, Alice Pattullomakes work that is inspired by British folk and superstition as well as mid-century design. Her illustrations have a wonderful sense of Britishness within a historical context. Her illustrations are often quirky with a rich sense of muted colour, often combining a love of typography with narrative storytelling.

Katja Spitzers is Berlin-based illustrator working mainly as an editorial illustrator in her home country but also producing screen prints for the likes of Nobrow Press and numerous international galleries. She is a versatile illustrator working across many mediums but is well known for her nieve line drawings which are often humorous and endearing. Here is a beautiful example of her recent screen printed calendar.

Represented by Heart agency, Stuart is a UK-based illustrator who is inspired by his Eastern European heritage and all its folk art implications. Most aspects of his work include narratives of weird and wonderful characters and strange mystical animals, rich in pattern and form. His screen prints are vivid in colour, beautifully composed and much coveted.

Ping Zhu is a Brooklyn, New York-based illustrator. Her work has a hint of 1950s illustration for children and benefits from clever and inventive use sweeping brush marks. She currently has a screen print for sale at Nobrow Press, to which she is an occasional contributor.

Famous for his pop art of the '60s, Peter Blake is as relevant now as he was then. He now produces mainly collage-based screen print juxtaposing imagery from contrasting times and eras in one quirky and whimsical image. His prints sell internationally and can be found in limited editions in galleries and online.

Nicholas John Frith works as an editorial illustrator for the likes of The Wall Street Journal and Penguin Books, and alongside his day job also produces an ongoing series of screen prints. Often just using two muted colours, these prints have a childhood feel, with animals, woods and fairytale characters all common themes.

Luisa Uribe lives and works in Bogota, Colombia since graduating from the University of Loughborough in the UK. She works prominently for children in her home country. Whilst working at The London Print Club she produced this fantastic screen print of Little Miss Riding Hood, using just red and blue to create an interesting graphic overlap in two contrasting forms of wolf and girl.

Living and working in London, Laurie Hastings combines her intricate line drawings of people and places with the process of printmaking, often using just one colour in a dreamy and delicate repetition of pattern within natural environments.

Ester Mcmanus is mainly a comic book illustrator working and living in the UK. Her prints have a fantastic edge, slightly scary and compelling with a rich use of pattern and graphic sensibilities. Fairy tale like scenes and odd creatures and characters to create intriguing visual narratives.