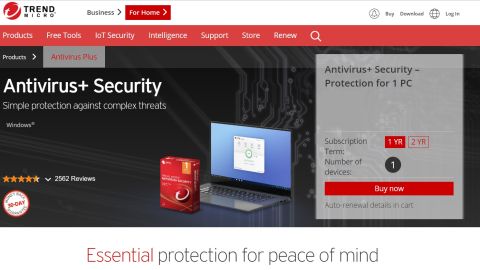 Trend Micro Antivirus+ Security is an antivirus tool that excels at simplicity, and we appreciate the useful bonus features, including protection from ransomware and spam, and be aware that some users may experience a slowdown on performance.

Trend Micro Antivirus+ Security is a basic security suite that has all the essentials, such as real-time antivirus protection and malicious URL blocking, which has earned it a place in our roundup of the best antivirus software.

It also features some handy extras, including a Folder Shield, which provides ransomware protection to prevent any unauthorized access to designated folders.

The Trend Micro Pay Guard feature works with numerous browsers, including Chrome, Firefox and Internet Explorer. It provides a higher level of security for online banking and other transactions of a sensitive nature. A spam filter is provided via another add-on for Outlook, and we appreciate the inclusion as some other security vendors restrict it their higher-tiered security suite offerings.

Trend Micro Maximum Security is a great choice in comparison to other starter antivirus offerings, considering the low cost of $29.95 (about £23) for the single computer, one-year license. With lengthening the subscription to a full two years the cost increases to $59.90 (about £46), and locks in this current price for a longer time, but unfortunately doesn't deepen the discount.

Going up to the next higher tier, Trend Micro Maximum Security is a complete security suite with features that include a password manager, parental controls and social media protection. It works on all the major platforms and this includes PCs, Macs, Android and iOS devices, and has a more affordable cost than the competition. A single year license to cover five devices has a cost of $49.95 (about £39), and for ten devices, the two-year license runs $119.90 (about £93).

It’s unfortunate that the Trend Micro Antivirus+ Security web page tucks away the free trial link, and rather pushes the '30-day money-back guarantee' option. We think the company is probably hoping that users go ahead and purchase a license without further searching, so be wary. Instead, head to the Free Tools link at the top of the page, and go to the Free Trials area for the truly free trial.

The trial is actually for the full featured Trend Micro Maximum Security suite, but this interface is very similar to the lower tiered product, and provide the insight if Antivirus+ Security will meet your needs. We like that the trial provided covers a full 30 days, which is plenty of time to make up your mind if you want a full subscription.

Installation is pretty painless, with a simple download, followed by an automated setup process. With the conclusion of installation, users are prompted for their email address to be sent product news and updates, and this step in our experience was entirely optional (as it should be), as we left the box blank and the installer completed uneventfully.

With the program fully installed, it quickly faded into the background, with the only reminder as an icon in the tray of our system. This antivirus solution is admirable how it works unobtrusively, and you can forget that you have it installed.

We started off doing some initial exploring, and with the default settings, it did not live up to expectations. Trend Micro Antivirus+ Security smartly contains a spam filter, but unfortunately it is not enabled by default after installation, and further the interface does not highlight it at all. In fact, we only found this for ourselves after we looked into the Outlook interface, specifically for an elusive toolbar, with subsequently the answer then making itself known via the Settings dialog.

Focusing less on these minor details, and in the ‘big picture’ view, Trend Micro is quite simple to install, has an effective core antivirus engine, coupled with a full 30-day trial allowing adequate time if the subscription is right for your needs prior to purchase.

The interface is clean and visually inviting, including animated icons, a scan button featured prominently, with your security status clearly indicated, as well as text captions and piles of tooltips. Additionally, there is a useful option to customize the console via a choice of a background image.

The Settings dialog follows the theme of simplicity as well. The confusing technical jargon gets avoided, and options are presented in easy to understand language, such as 'Prevent programs on portable drives from launching automatically' or 'Check if programs try to make unauthorized changes to system settings which could threaten your security'.

Some experts will seek even more control, but for those with no desire to get down in the weeds, Trend Micro's autopilot certainly has enough control for most users.

Scanning options continue to be straightforward, with simplified choices to do a quick, full or custom scan. Also the scanning efforts can be targeted to specific drives or folders. Unfortunately, total control of the process is not offered, as we are missing Avast’s options for adding other scan types, or controlling all the fine points of the process. On the other hand, we give it high scores when it comes to usability, and this will be preferred for those that just want a simple scan from their antivirus program.

Measured scan times were somewhat lower than average during the testing process, but that's not necessarily a problem; any program can run itself at ludicrous speed when scanning, and come up empty. Antivirus+ Security is thorough at what it does, as it seeks out malware. Too bad that it also gave a false alarm when it encountered several legitimate technical tools, such as the Nirsoft app, but if you've used security software before, you'll know that this is a fairly pervasive problem.

One feature we particularly appreciated was the URL filtering, which blocked many malicious URLs when tested. The custom configuration options are also useful, which are a step above competing antivirus solutions, which are limited to only a switch for the URL blocking to be turned on or off, but this one includes a 'protection strength' slide bar, that can be increased to block more aggressively, or vice versa.

Trend Micro's Folder Shield  is a useful feature that targets ransomware, a sentry over your Documents and Pictures folders, and connected USB drives, to protect from modification attempts on these files, and there is an option for additional folders as required. While we understand that Folder Shield is hardly novel, and Windows 10 already can do this with Controlled Folders, but an extra layer of protection is always a plus, and certainly when it can stop aggressive ransomware instantly.

Trend Micro's Pay Guard is a welcome addition, a highly secure browser to conduct online banking, shopping and other sensitive transactions. It is designed to thwart malware, rather than becoming a victim of it. Once again, hardly anything special, but including it in antivirus software is a bit of a standout.

Bitdefender SafePay and other secure software setups secure the environment in a custom browser constructed for safety. Alternately, Antivirus+ Security utilizes your favorite browser, as long as its Chrome, Firefox or IE, and then resets it to maximize the security settings. The benefit of this method is to preserve simplicity via the familiar interface, but also leaves us wondering on the level of security offered. We would that it is not as secure, with Trend Micro having less control over the browser functions, but to be quite frank, the reality is there is no way to really test how secure any of this is.

There is also a spam filter included, although Trend Micro doesn't mention it, and we randomly stumbled across it via the right page in the Settings dialog. It only works with Outlook, using POP3, SMTP and Exchange, and was added after the initial activation.

We also looked at the anti-spam capability, but it left a little cold. Trend Micro ended up incorrectly designating legitimate emails as junk, and on a routine basis. Some adjustments are permitted, as trusted addresses can be whitelisted as Approved senders, and and by moderating the filter’s strength.

The Link Filter tool has the ability to fully block emails based on their content, which includes links to known malicious websites – an excellent way for preventing contact with dangerous messages. While we would not consider it the most robust of spam filters out there, there are multiple settings to allow for fine level of tweaks, making it a useful addition to the suite.

AV-Comparatives is a real-world protection benchmark that tests 18 leading antivirus engines on the latest in malware. Its recent tests have found good results for Trend Micro, with their latest products able to block an awesome 100% of threats on nine different tests in 2018 from February to October.

The downside is that this program alarms falsely more than competitors, but still manages a first place ranking among 18 competitors in the February to June 2018 summary report. In second place was F-Secure- the other antivirus to achieve a 100% protection score- followed by Bitdefender (99.8%), Kaspersky (99.7%) and Avira (99.7%).

Differing from some of these other reports, SE Labs July to September 2018 Home Anti-Malware Protection report orders these programs via a scoring system with a high complexity, that gets determined by how the protection gets performed, and accounts if the malware threat is blocked on launch, or is neutralized after it gets running. In this report, Trend Micro falls down to sixth place, putting it behind some major competitors, including Kaspersky, Norton, Windows Defender, ESET and F-Secure.

However, getting down into the details, the difference in scores from the top down to Trend Micro is quite small, with first place scoring 100/100, and Trend Micro’s score a solid 98/100. In fact, Trend Micro still receives their AAA award, which is the top designation, confirming the strong performance.

We endeavored to confirm these tests, and we took Trend Micro and matched it against our custom ransomware software. With this program coming from our own design and creation, Trend Micro can’t identify this via a virus signature in its database, but rather has to turn to monitoring of the behavior to identify. Many antivirus products fall short when tested like this, and Trend Micro performed well.It not only neutralized the ransomware with a mere three files getting encrypted, but recovered all of them, with no loss of data.

The downside of Trend Micro surface when we look at system performance. PassMark's 2019 Security Products Performance report rounds up 14 security suites examining their impact on system performance on 23 different tests. Trend Micro's products that they tested, Maximum Security and Internet Security, both ranked on the lower end, in 12th and 13th place, which placed them quite low among the tested solutions.

We can certainly critique the methods used for PassMark's scoring, but additionally, the AV-Comparative's October 2018 performance test came up with similar results, placing Trend Micro in 13th place of their 18 tested antivirus programs.

Putting it all together, how Trend Micro performs on your PC is dependent upon your hardware, and how you use the software. Download the trial and give it a try to see firsthand the impact on your specific system before purchasing the subscription.

Trend Micro Antivirus+ Security is an antivirus tool that excels at simplicity, and we appreciate the useful bonus features, including protection from ransomware and spam, and be aware that some users may experience a slowdown on performance.