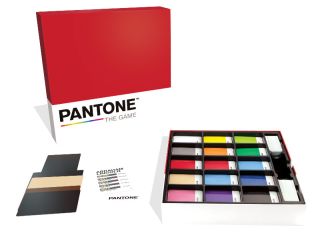 Do you feel like your Pantone skills are wasted on print design alone? Do you yearn for a way to prove your superior colour knowledge, perhaps in a party setting? Well there's a treat in store for you. Get ready for Pantone: The Game, from Cryptozoic Entertainment and game designer Scott Rogers, and officially sanctioned by the kings of colour themselves.

Here's how it works: one player (the 'artist') chooses a character card, then tries to create representation of that character using a selection of Pantone swatch cards (there are 15 to choose from). The other players then take turns to guess who the character is, with hints introduced if no one manages to get there on their own. You can see it in action in the video below.

Of course, the pop culture angle means this game is not just for designers (and apparently up to 20 people can play at once), but if you already know the perfect Pantone for Santa's jacket, that's bound to give you the edge, right? Plus, it's a top gift for designer friends.

"What makes Pantone: The Game so special is how intuitive it is," says Cryptozoic's Adam Sblendorio. "There are so many creative paths to creating the characters in the game and none of them are wrong and all of them are fun!"

Pantone: The Game is available buy now from Amazon for around $30 (it ships to the UK, but isn't available on Amazon.co.uk yet). At time of writing it was out of stock, and due back in at the start of September. If you're in the US you can pick one up from retailers such as Barnes & Noble and GameStop.