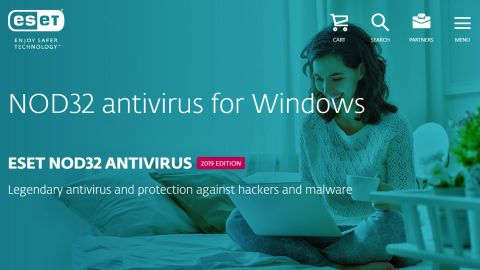 NOD32 is a great choice for beginners, but the real strength is for the power set who appreciate the advanced features with complete configurability.

Dating back to 1987, ESET sells a diverse set of software encompassing all the major platforms, and is the choice of 100 million customers in search of the best antivirus software. Starting at the lowest tier is ESET NOD32 Antivirus. It is focused on the core task of antivirus protection – more so than most of the competition – and avoids extraneous extras such as a file shredder, password manager or other bonuses. However, despite such omissions, the features add up to more than many other solutions.

The heart of NOD32 is its real-time malware protection, which efficiently detects malware and such through a cloud-based file reputation service. Also its anti-phishing capabilities will detect and block websites of ill repute. NOD32 also has additional layers to shut down potential exploits and to protect from ransomware, and it watches out for malware that uses PowerShell or malicious JavaScripts.

In addition, a Device Control module reduces the infection risk from other devices by controlling the access to external storage including USB sticks, external hard drives, optical storage media, and any Bluetooth and FireWire devices that are looking to connect to your system.

New to this revision of NOD32 is an UEFI scanner to search out malware hidden in the firmware of the PC. There are also tools to manage the licences. Finally, a referral program is offered to extend the user's trial license for each additional paying user you sign up for ESET's software.

With plenty of power packed into this antivirus program, we also note the extra helping of settings to control, with more than 150 profile tweaks available to dial in what each user wants.

NOD32 costs $39.99 (£31) to purchase one PC, one-year license. That's perfectly average for antivirus software, with Bitdefender's Antivirus Plus costing the same, but also there are some marginally better deals if you know where to look. For instance, Kaspersky Antivirus has a cost of $29.25 (£22.53) on the initial subscription, and $32.50 (£25) upon the renewal.

A deep discount can make NOD32 a better deal if you have several systems that will need an antivirus program. For example, the four computer, three-year license goes for only $139.98 (£108), which works out to a downright affordable $11.66 (£9) per device year.

The other option is to go for the multi-system license, which moves you up a tier to the ESET Internet Security plan. It also brings additional security suite capabilities, including a firewall, antispam, parental controls, webcam protection, to name a few. Also, the cost is only a little higher, with the four computer, three-year license available for $169.98 (£131), which works out to $14.17 (£10.92) per device year.

NOD32 offers a 30-day free trial, with only an email address required prior to activation. Our install process went smoothly, and after the installation completed, we located only the expected files when we looked under the hood; they were neatly organised, signed digitally, occupied a reasonable and average 650MB of our hard drive space, and only a few processes were added to our test system using a total 100MB of RAM in the idle state.

There are plenty of options to fine tune the software's settings. For example, while other antivirus solutions are limited to controlling the scanning of emails to either on or off, NOD32 goes further, and gives a choice of email clients to scan, which emails, such as such as received or sent, should be scanned, the protocol for the monitoring, and the action to take if a threat gets detected.

While this type of total control is hardly needed by everyone, it is nice option for power users. For those situations with a potential conflict or suspected malware, having the option to apply a system tweak that NOD32 offers would be an important step in correcting the problem.

NOD32's interface can initially appear a little cluttered, loaded down with status information, buttons, sidebars and links. Even the basics require a learning curve for mastery; for example clicking on Computer Scan takes you to the Scan page, and then waits for further input. However, a click on the Scan Your Computer button then starts the scan instantaneously.

Once you understand it, NOD32 works the same as any other antivirus program. The general scans start with a click, and the same simple sequence for running a quick removable drive scan. Also there is the option to create custom scan types, which focus on scrubbing a specific location, using the specific scanning rules that were previous setup.

This high level of custom configurability runs throughout the program wherever you look. Right-click on a file in Explorer, and NOD32 will provide an option that does the usual scan. However, look deeper, and there are also options to examine the file's reputation to get more info on it, or for only scanning the file without any cleaning for a quicker verdict, or even for manually quarantining the file even without identifying it as malware, which is a nice option to archive a concerning file.

Whatever the choice of method for the scan, NOD32 performs well. Of note, beyond the first scan, ESET's Smart Scan only examines those files that are changed or new to speed the process up. The rate of detection is quite high as well, with NOD32 finding all sample malware, and also impressive without any false alarms.

The URL filtering performance was middle of the road, and detected quite a few malicious URLs, which has also been found on previous software reviews of NOD32. The major improvement this time around is with the false alarms, as this package was completely accurate, and amazingly provided no false alarm about any legitimate site at all.

The Device Control tool controls the behaviour of NOD32 when you connect an external device. The options enable you to have these devices be read-only, indicate a warning, or simply completely block them. There can be rules applied globally across devices, or more selectively ('block all USB storage except from x, y, z'), only some user accounts, and the system logging all device connections to be archived until later.

This sounds powerful, and it is, but the catch is that it requires some investment of time and effort to get configured. NOD32 lacks a library of prebuilt rules, and an easy way to create rules visually. Alternatively, the user gets pushed into wading through many lists of technical options where you hope they are correctly understood (hint: there is a Help page for each feature). Quickly, this area really becomes the domain of power-users.

At least the Tools menu is less intimidating to users, where there are easy-to-view logs of what the program has blocked. The running processes can also be visualised, with another option to download a bootable SysRescue cleaning tool.

The ESET SysInspector tool is yet another highlight. The system can be snapshotted to highlight running processes, network connections, critical files (HOSTS), registry entries and other items. This is yet another advanced tool not for novices, but anyone with experience of similar software like Sysinternals' Process Explorer will feel right at home.

NOD32 goes beyond the expectations of just an antivirus app. Novices can skip through some of the more advanced options in favour of ease of use. However, power-users will love the multitude of advanced options, such as the Device Control module, and the custom configurability.

In our quick malware detection testing, ESET exhibited a high degree of accuracy. When it came to a more comprehensive assessment, we examined the results of the major testing labs for their full scope of testing.

Another major testing lab, AV-Test, also indicates low or mid-range results on its previous testing. Unfortunately, the company has not examined ESET products since 2017.

When tested by SE Labs for the July-September 2018 home anti-malware report, it scored some of the best results. This ranks ESET third among the 13 antivirus programs, which places it behind Kaspersky and Norton, but ahead of Avira, Trend Micro, Avast, McAfee and other leading programs.

Comparing the results of multiple tests shows multiple views on ESET. This is partially explained by the fact that each lab has their own independent methods, protocols and scoring. The overall view that develops is that ESET is not at the top of protection, but neither is it at the bottom, putting it solidly into the average category.

While this is true, we also feel that this kind of under-represents ESET NOD32's inherent strengths, particularly for expert users. In testing, these various labs utilise antivirus packages in their default settings, but for advanced users willing to put the time and effort set up ESET's configurable settings, such as Device Control, then this software has further pluses not fully tabulated in standard testing.

Another benefit of a good antivirus program is that it will have minimum impact on system performance, and ESET performs well in this department. PassMark's Security Products Performance Benchmarks 2019 examines 23 critical metrics reporting on the performance impact among 14 leading security suites. In this area, ESET performs well among the competition to finish in second place, just behind Norton Security; even the generally lightweight Windows Defender falls back to 6th place in this testing. We also remind you that the exact performance impact on your system are dependent on your hardware and use case scenario, but it's safe to say that ESET NOD32 Antivirus will have minimum impact on performance for many systems.

NOD32 is a great choice for beginners, but the real strength is for the power set who appreciate the advanced features with complete configurability.