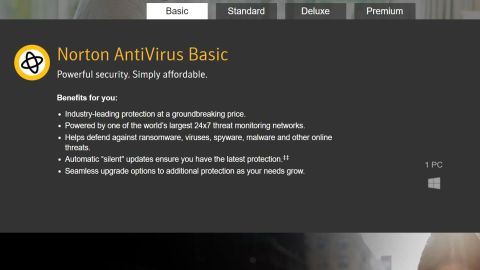 Norton launched its first antivirus program back in 1991, making it one of the longest lived antivirus software providers on the market. Norton provides antivirus software for all the major platforms, including PCs, Macs and mobile devices, and covers the full spectrum of security needs. In this Norton AntiVirus Basic review, we're focusing on its cheapest antivirus plan. How does it stack up against the competition when it comes to finding the best antivirus software around?

As you might expect, Norton AntiVirus Basic focuses on the basics. Features include threat detection via known antivirus signatures, monitoring of intelligent behaviour, a file reputation service that identifies new hazards, and strong anti-phishing technology. There are also some worthwhile extras, such as the Norton Identity Safe, which helps users manage passwords.

For an initial $29.99/£29.99, users can pick up a 1-computer, 1-year license. For US users, after the first year that rises to $59.99. However, while rivals provide better-value plans for multiple devices and multiyear licenses, Norton doesn't offer a multi-device discount, nor a better deal if you sign up for multiple years.

This doesn't mean there aren't discounts to be had from Norton, you just have to step up to a higher package to take advantage of them. If you need security on multiple devices, you'd be better off with the Norton 360 Deluxe, which covers up to five PCs, Macs, smartphones or tablets for $49.99 on the initial annual subscription, and a renewal cost of $99.99 (although if you're in the UK, you'll pay a flat rate of £69.99 a year). This plan also throws in parental controls, SafeCam, and Dark Web Monitoring.

Unlike most of its competitions, Norton AntiVirus Basic doesn't offer a free 30-day trial. Be aware that some plans provide a 60-day moneyback guarantee for those not satisfied. However users are still charged upfront, and have to apply for a refund.

The installation process is quite simple. Our setup program identified another antivirus solution on our PC and requested an uninstall, but we also appreciated the option to leave it installed. As the setup proceeds, you're offered to choice to install some Norton browser extensions: Norton Safe Web advises users of dangerous websites, while Norton Identity Safe acts as a password manager. We found both programs to be useful additions for users that don't already have a dedicated solution for each of these categories. However, be aware that such software is certainly available as freeware, so they don't add much to the package here.

With installation complete, some quick maths revealed that Norton occupies 1.6GB of disk space – a significantly higher amount than most of its competitors. That said, with today’s storage devices, this amount is unlikely to cause you problems when it comes to reaching capacity.

Otherwise, Norton had minimal impact on our system’s performance, and we found only three new background processes, even including the Chrome extension host, which totally consume less than 50MB of RAM. Overall, in most cases Norton runs super quietly.

Norton AntiVirus Basic is filled to the brim with options, and has an attractive interface that makes it powerful yet easy to use. Viewing the status of your protection is simple, including full details about the last update and scan. Buttons are grouped into common functions such as Safety, Identity, and so on. A click on each reveals even more actions and additional settings, which is more than we would expect from any dedicated antivirus software.

If that sounds intimidating, its not – the service is really quite simple in use. Just click on Security > Scans to start a scan of your system. There is the choice to give a quick scan or opt for a deeper look. We also like the Custom Scan option, which enables users to home in on specific drives, folders or malware files.

Vendors such as Avast and Avira do provide even more low-level tweaks, such as enabling the user to specify the types of archives to check and the depth of nesting to support them (namely how many open archives). However, we doubt most users will notice that Norton lacks this feature, as it does offer so many other options.

Norton lets the user define and save their own custom scan, for instance to check D:\Files and E:\More, while bypassing other scan types (such as rootkits, or tracking cookies) to save time.

Another great feature is the ability to schedule scans to run automatically, including additional parameters, such as only to run when the system is idle and on AC power. Users can even choose what happens after a completed scan – turn off the system, sleep, hibernate or leave it on. While other software offers similar choices, the wording here is clear and easy to understand.

There are also functions that add value to the package. For a situation that requires more than a regular scan, the program has the effective Norton Power Eraser, which is designed to detect stealthier threats. At the lighter end of the spectrum, there is the Norton Insight option, which scans the processes and quickly highlights anything worthy of closer examination.

For those preferring a simpler approach, there is no need to get involved in any of these complexities; Norton default settings are perfectly serviceable. On-demand scans are initiated with a right-click on the console or via the Explorer menu. During scans, multiple threads are used for optimal performance, but those threads get returned when resource-intensive applications are simultaneously run so the system can maintain a high level of performance. Overall, our speeds when using Norton were excellent, with complete detection of all test threats with no false alarms, which is ideal when it comes to antivirus software.

It's more difficult to control web protection via browser extensions generally than using the dedicated software. Still, Norton has one of the best malicious-URL blocking records in the industry, making this worth the install if you don't already have a similar solution.

Norton offers plenty of additional performance bonuses, including tools for the deletion of junk files, defragmentation of your hard drive, and management of startup programs. In our estimate, these are superior to what's offered by most competitors – not only can Norton list your startup programs, but Startup Manager indicates the number of other Norton users with them installed, plus it has the ability to delay their startup, and turn the software on or off. Of course, power users will realise that other tools, for instance the highly regarded CCleaner, provides even more PC maintenance functionality for free.

Norton comes in at a respectable 7th place, offering a high protection rate of 99.5%. Norton beat Avast (99.4%) and only lagged behind Kaspersky (99.7%) by a bit. Norton’s only deficiency was a higher rate of false positives (32), which put it third highest among competing programs.

AV-Test's July/August 2018 Windows Home User report shows us some even better results, with Norton hitting a 100% protection rate for zero-day and common malware in both the July and August tests. Norton also gets top scores with a perfect 6/6 on performance and a high 5.5/6 for usability. These high scores earn it the AV-Test's 'Top Product' award.

In our own tests, we used a custom ransomware-like program (written by ourselves) designed to sift through a tree of test folders, and to open and encrypt common images, videos and other document types. As the threat was our own creation, Norton could never had seen it before, which makes this an excellent test of the program’s ability to detect and block ransomware based entirely on behaviour, without reliance on virus signatures to identify the malware.

In our test, we found Norton's performance to be quite lacklustre. We fired up our home brew ransomware, and quickly the program stopped. While that may at first sound encouraging, when we looked further, some files had been encrypted. In addition, the encrypted files were not recovered, and neither did Norton give us any warning of the issue.

We decided to run the program for an encore performance, and the result was identical, with a few files encrypted, the ransomware disappearing, and again no alert as to what was occurring. We next pressed the issue by running the ransomware for the third time – again it was killed, and finally this time, an alert informed us that a threat was detected and subsequently removed.

The test ransomware was successful in the destruction of 454 files before Norton neutralised it. By way of comparison, Kaspersky not only stopped the same ransomware at less than 20 files, but also recovered all the originals, so we had no loss of data.

Finally, our tests on the impact of Norton on system resources revealed favorable results. The 2018 Consumer Security Products Performance benchmarks of PassMark Software indicate that Norton has less impact on systems than other software solutions, awarding it first place among 15 contenders, making it even better than the lightweight Windows Defender. Norton is less likely than many competitors to slow down your PC, which makes this an excellent choice for an older system.