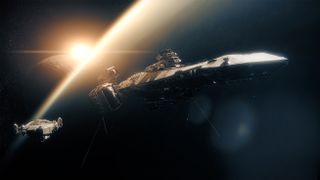 Notoriously fast-paced, the video games industry is in a state of constant flux. As games companies and artists continue their search for new ways to entertain audiences and further charm existing players, so too does new technology continue to reshape existing workflows.

One games company that’s currently at the forefront of many a would-be game artist’s mind is Cloud Imperium Games (CIG), best known for its record-shattering crowdfunded title Star Citizen. Developed in CryEngine, Star Citizen combines classic space sim gameplay with Hollywood-calibre visuals, and has, so far, raised over $155 million from passionate fans.

It's an extremely high-profile project – but CIG’s beginning was on a much smaller scale. Founded in Austin in 2012 by the creator of best-selling Wing Commander and Freelancer series Chris Roberts, Cloud Imperium Games started life with a staff of just eight. Now spread over five studios – LA, Austin, Wilmslow, Derby and Frankfurt – CIG has over 400 employees.

Working tirelessly to develop the content and technology needed to nail down the scope of a game whose budget and ambition is always growing, the CIG team in Europe, under Foundry 42, is also developing the mission-driven, single-player campaign Squadron 42, which is set in Star Citizen’s first-person universe.

“This is the most challenging company I’ve worked for in terms of quantity of content and quality of art we’re trying to hit,” says Squadron 42 art director Paul Jones, who has over 20 years’ experience in the industry, including seven years at Epic Games.

To successfully manage the quality and quantity of work needed for this epic project, the CIG team has had to develop several efficient new workflows. “Throwing million poly ships around just doesn’t happen any more,” Jones says. “We’re still dealing with a game engine and we’ve still got various performance issues to worry about. So, we’ve had to come up with workarounds that allow us to create good-looking art with quite simple geometry.”

The man behind some of those workarounds is CIG’s vehicle art director Nathan Dearsley. Having worked for Crytek for approximately seven years previously, Nathan was already very familiar with CryEngine’s technology.

“I was working at Creative Assembly when I watched Chris Roberts do a big Star Citizen reveal at GDC,” Dearsley says. “Within about 20 seconds of him putting it on the screen I just knew it was CryEngine – it has a very distinct rendering style that I recognised immediately.”

Liking what he saw, Dearsley reached out to the CIG team and, soon after, made the move across from Creative Assembly. Confident in his abilities with CryEngine, Dearsley quickly offered new workflow solutions to the CIG team to help optimise the Star Citizen pipeline without compromising quality.

“When I joined CIG, they’d made two ships and had some small environments – the project had to start somewhere,” he says. “Although the ships looked promising they were expensive in the engine. Then I came in and said, ‘Let’s try to do it this way’.“

“Workflows are different in different game engines, but I’d just integrated several art techniques and pipeline work into Alien Isolation workflows at Creative Assembly that would certainly help Star Citizen. Both were sci-fi titles, both had a hard-edged aesthetic at the time, so I’d be a fool not to try.

“We model everything,” Dearsley says. “When you do this, costs can rise very fast, especially if you’re after a baked look with nice soft edges, but can’t afford a unique map per asset (we have tens of thousands of assets). A lot of people go on about triangle count in game engines, which actually isn’t as important as your vertex count, as these suck memory.”

“Because we use a weighted normal approach, we can, in essence, have one smoothing group on assets in most cases. So as long as we keep UV shells to a minimum, vertex costs become no more expensive than splitting your smoothing groups, yet you get lovely filleted corners and edges for free!”

Reusing as much as possible

Not only does this workflow save the team money, it also cuts production time significantly. “If you were to develop this game in a more traditional sense, where you go down the route of baking everything, it wouldn’t be a very flexible workflow for this project,” Dearsley explains.

“You can certainly get some amazing results from it, but we needed things that we can iterate on and mass produce very quickly because of the diverse scale of models and the organic approach we have in making the whole universe. So, the feelers were put out for that and a lot of people were afraid of change but we stuck with it and it paid off.“

“It means that we can mass produce stuff to a really good quality, efficiently, by not using bakes all the time. We’re reusing as much as we possibly can, which obviously helps with production time and frees up more creative time for my team as well as promoting visual consistency – something that’s very important.

“When you take the process of baking out of the chain, that’s a huge time-saver for the whole project. Because we have the vertex data there, and because we can have more vertices, essentially, we have more information in the mesh so we can do much more with blend shading, large scale ambient occlusion, vertex tinting and so on. Making this commitment at the very beginning of the art pipeline chain pretty much defines and carries through the whole process.”