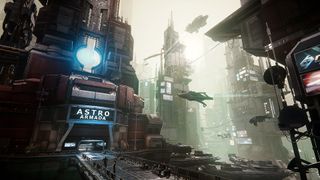 If you have a passion for video games, there’s no better time to turn that love into a lucrative career. From ground-breaking new technology to innovative new titles, the video games industry is a particularly exciting place for digital artists right now.

“There are all kinds of exciting opportunities in games,” says Cloud Imperium Games character art director Josh Herman. “Games are such a massive part of our lives now and they aren’t going to go away – the industry is just going to get bigger and bigger and there will always be quality jobs if you have the skill and the drive to find them.”

As more ambitious titles are being developed and pioneering technology such as real-time gains momentum within the creative industry, wanting to work in the world of gaming is a goal shared by many. But, like other creative fields, it can be a tricky industry to break in to.

“Specifically, the first 10 per cent of it,” says Nathan Dearsley, vehicle art director at Cloud Imperium Games. “Don’t be in the habit of thinking that quantity makes quality, because it doesn’t. In fact, it’s usually the opposite.”

“Only show your best stuff. You will be judged by your weakest piece on your reel/site,” adds CIG character art director Josh Herman.

02. Demonstrate a range of styles

“We do all kinds of characters, from one with fully cloth costumes that are totally covered in layers to fully armoured heavy marines, alien races, and realistic human faces,” says Herman. “So, in a new recruit I want to see that they have a lot of range in a realistic style.

“For junior artists, a couple of strong pieces that illustrate a solid understanding of the fundamentals and knowledge of the game art process will help you stand out,” Herman explains.

“Also, if you are applying to be a character artist then you should send a portfolio of just character artwork. Don’t confuse me with environments, animations or VFX. A prop or gun can be okay if you’re feeling like you don’t have enough work, but they aren’t needed.”

06. Specialise if you can

Herman mirrors that advice: “If you know what you want to do, specialise. Knowing as much as you can about the other disciplines is great, but if you want to get a job you will need to have professional-level work in at least one of them. Specialising is the best way to do that.”

“Failure is a big part of personal development,” Dearsley comments. “Fail lots – you’ll come out the other end better for it.”

08. Mix with the community

“Get involved, start liking artists on Facebook, comment on their work, get out there and start mixing with people on places like Polycount because it’s an extremely small world and an even smaller industry. You just never know where that next work offer will come from,” Dearsley says. “Project a really good image of yourself online.”

“We use some recruitment forums such as ArtStation, but a lot of the time we find people by asking our devs if they know people who are looking for work, who do good work, and who are fun to work with,” Herman explains.

“No one wants to work with a jerk,” says Herman. Dearsley agrees, especially when it comes to interviewing: “When you do get to the point where you’re getting interviews, make sure you research the company you’re going to be interviewed with.“

“I’ve sat in a few interviews where, when asked about the company, the answer is just a blank face. From that it’s clear you obviously don’t really want to work for us that much. Even if your work is great, at that point, I’m not really interested in working with you.”