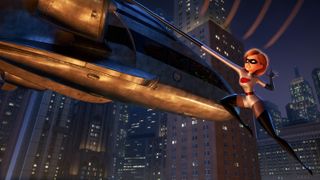 A lot has changed at Pixar Animation Studios. Technology and the deep-diving research that precedes it has allowed the studio to produce some of the most ground-breaking visual energy ever seen.

However, Pixar wasn't always the animation giant it is now. Back in 2004, a lot of the software the studio used was written by a very small team of artists. But it didn't take them long to make their mark, and 14 years later Pixar has gone from being a little start-up animation team to a huge part of the Walt Disney Corporation.

Since its first production, Pixar Animation Studios has continually created animated movies that have broken down barriers of digital possibilities. From the simulation of Sulley's fur in Monsters Inc. and beautiful water in Finding Nemo, to the creation of mouth-watering food in Ratatouille and new hair simulation software used on Brave's fiery red-haired character Merida.

Each film in Pixar’s animated timeline has set new standards and pushed the levels of technological development for future movies. So just how do they create such beautiful, seamless animations? What are the secrets to Pixar's success? Here we take a look at some of the techniques, technology and tools that have helped shape some of the company's best-loved 3D movies.

Point-based global illumination was perfected and brought into the game for Monsters University. Lush skin, highly textured surfaces and spectacular lighting effects join the arsenal of takeaways for the second instalment set in the world of monsters.

A group of algorithms calculate the way light bounces from surface to surface within an environment. It produces beautifully soft, natural-looking effects – but only if you’re prepared to wait for the effect to be added once the animation has been done. Animators can now produce the frames of their work while the lighters can give them all the gorgeous lumens they require. Real-time global illumination and USD is now being used in Pixar productions, and we can’t wait for Toy Story 4, coming in 2019.

“USD is gaining traction, even outside our industry, because it allows us to have a massive scale of complexity and the ability to work within that complexity, in multiple departments at the same time,” says Steve May, a senior member of the Pixar Technology Team. Apple recently announced at the WWDC that USD is the new PDF for augmented reality.

“We’ve also gone through a transformation and push with RenderMan,” adds May. Pixar has created a new architecture for this long-established gold standard for how rendering is done in visual effects and animation. The algorithms have improved
and computational power has increased to such a point that it can now support path-tracing.

“In the production of Finding Dory, the RenderMan software was at a stage to make it possible for the Pixar crew to fully embrace path-tracing, enabling much more complex lighting effects, with a lot less work from the artists. It grasps much more complex geometry more efficiently.”

So, Pixar has made this big push to move RenderMan to path-tracing. What does that mean exactly? May informs us that it is all about having RenderMan run interactively, and making it so that there is no delay between the time the artist makes the creative decision, and when the results appear.

Pixar’s proprietary animation system was first used on Brave, and has been used on every Pixar project since. “Presto is head and shoulders the best animation system in the world,” testifies May. “It’s really been showing how well it holds up in complex scenes within films such as Incredibles 2 and Coco.”