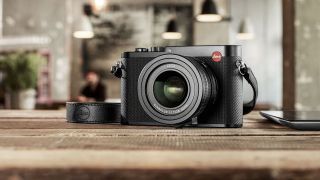 The best point-and-shoot cameras give creatives the best of both worlds: a camera that offers premium quality in a tidy, self-contained package. Gone are the days when a point-and-shoot camera was a byword for cheap tat: these snappers have quite simply been getting better and better, with all the major manufacturers muscling in on the action.

Some of the best point-and-shoot cameras offer large full-frame sensors, while others have frantically ridiculous zoom lenses that allow you to get closer to your subjects that you've ever dreamed. Some are also budget-oriented, designed to offer as many features as possible for the user who can't pay the highest premiums.

We've selected 10 of the best for our guide, and we're confident that whatever your needs and budget, we'll have a point-and-shoot camera to recommend you. And remember to take a look at our best camera guide too, in case a point-and-shoot isn't quite what you're looking for.

Of course, the best point-and-shoot camera for you depends on your expectations and your budget. As a general rule, cameras with 1in, APS-C and full-frame sensors offer many advantages over those with smaller sensors, most notably in low light. Prime lenses can also offer great advantages over zooms in terms of image quality.

There are plenty of other factors to consider. You should also look out for cameras with tilting LCD screens if you want to get creative, as well as viewfinders if you tend to shoot outdoors with any frequency. A long zoom is great for holidays and travelling. However, this feature tends to be accompanied by a narrower maximum aperture range – which can make the camera harder to use in low light and when looking to create shallow depth of field.

We've factored all of this in and come up with our selection of the best point-and-shoot cameras right now – whatever your budget and experience level. Don't forget to pick up one of the best memory cards, too.

The best point-and-shoot camera right now is the Sony RX100 Mark IV. Sony has wisely chosen to keep all seven of its RX100 cameras in production and widely available since each one's respective launch, which means there’s a strong possibility one will suit your specific needs and budget.

While the company’s more recent models still have an asking price that sails close to their RRPs, the Mark IV continues to hit the sweet spot between features, performance, size and price.

This point-and-shoot camera is an ideal all-rounder for the more discerning user. On top of a 20.1MP 1in sensor and a ZEISS Vario-Sonnar T* 24-70mm f/1.8-2.8 optic, the camera has a high-quality pop-up viewfinder, together with a tilting LCD screen that goes all the way around to face the front, and even 16fps burst shooting for critical captures. 4K video and HD recording to a staggering 960fps for slow-motion output are also on hand (making this our pick of the best point-and-shoot cameras for film, too) as is Wi-Fi and NFC for simple cable-free communication between the camera and smart device. It’s not the cheapest option out there, but you get a solid performer for your money, whatever you might be photographing.

A tiny but capable superzoom compact, packed full of tech

Panasonic's TZ range of travel-friendly superzoom cameras has long been hugely popular with roaming photographers, and the Lumix TZ200 represents a great stride forward in terms of its zoom capability. Somehow, Panasonic has managed to fit a 24-360mm equivalent onto this tiny body, giving the user a great deal of reach and making for a fantastically versatile imaging machine that can still fit in your pocket. For an uncomplicated camera that does as much as possible, the Lumix TZ200 is a really solid choice, whether you want to take simple reference photos for a creative project or high-quality prints that you'll incorporate into your work: it's ideal for both. That 1-inch sensor gives it real flexibility in all sorts of lighting conditions.

If you have a bigger budget, this modern full-frame smasher should be at the top of your list

Leica’s excellent M-series rangefinders are probably the last kind of camera that would make this list, but the firm’s Q (Typ 116) model is a different beast. It blends classic good looks with modern trappings, from autofocus and built-in Wi-Fi through to a 3in touchscreen and a superb 3.68million-dot electronic viewfinder. The 24MP full-frame sensor allows it to easily capture better images than most other compacts, although the fixed-focal length 28mm f/1.7 lens in front of it – while optically excellent – may prove limiting for those who may need a zoom. This is a no-compromise point-and-shoot camera that produces exquisite stills, but it’s asking price very much reflects this – definitely one for the purist. It's worth noting as well, however, that the Leica Q2 was recently announced, so we may see a (probably mild) price reduction for this model fairly soon.

Nikon's largest superzoom went from big to ridiculous with this update. The Nikon Coolpix P1000 boasts a lens with a whopping equivalent focal range of 24-3000mm. Yes, 3000mm. At that distance, you can expect to pick out details on the surface of the moon (as indeed many users have done), and you can monitor all this either with the high-resolution electronic viewfinder or the tilting LCD screen on the camera's rear (not a touchscreen, unfortunately).

It does come with trade-offs, as you might expect. The camera itself is an extremely hefty piece of kit, while its 1/2.3in sensor is comparatively small and suffers in terms of dynamic range because of it. Still, Nikon has packed an impressive amount of tech in here, including superzoom essentials such as Dual Detect VR (vibration reduction, compensating for camera shake), and the P1000 is undoubtedly unrivalled in superzoom stakes.

The best waterproof compact camera on the market right now

If you’re the adventurous type who needs a point-and-shoot camera that can take some punishment, meet the Olympus Tough TG-6. Waterproof to 15m, shockproof to 2.1m, crushproof up to 100kgf and freezeproof down to -10°C, this is a camera that will take everything you throw at it and more. The best part is however that it also produces terrific images and 4K video thanks to its backlit 12MP CMOS sensor, and its 25-100mm equivalent f/2 lens gives you real shooting versatility – far more than you’d get from something like a GoPro.

The Tough TG-6 boasts an interesting Variable Macro System, which specialises in allowing you to shoot close-ups at distances between 30cm and 1cm, while built in Wi-Fi lets you use the OI.Share system to instantly send images to your smart device or take remote control of the camera. There are also some useful underwater modes to help you get the most out of the TG-6’s sub-aquatic capabilities, as well as GPS, Compass and Location functions so that you can always get accurate location data for your images. The small sensor is a bit of a shame as it means the camera struggles in low light, and it’s also worth noting that this is a fairly minor upgrade over the previous TG-5, so if budget is an issue you might want to try that camera instead. However, as a point-and-shoot camera for adventurous stills and videos, this is unrivalled.

While Canon carries more advanced models in its PowerShot compact lineup than the G7 X Mark II, this do-it-all compact has the best balance of portability, image quality and usability. A great all-in-one walkaround camera for those wanting malleable Raw files or print-ready JPEGs alike, the substantial grip makes it far nicer to handle than Sony’s RX100-series models, while a lens control ring, a tilting LCD with great touch-sensitivity, built-in ND filter and Raw shooting with in-camera processing make it as capable in operation as it is in the quality of its output. However, for a camera of its size, it’s a pity that Canon hasn’t found space for an electronic viewfinder. The camera’s PowerShot G9 X Mark II stablemate is also worth a look if you like the basic idea of the G7X Mark II, but want something slightly slimmer – although its lens isn’t as wide nor as long, and its screen is fixed in place.

Pricey but much loved, this retro compact exudes style and spits out nothing but quality results

With only a handful of compacts in Fujifilm’s stable these days, it’s the well established, very respected Fujifilm X100F that makes the cut. While pricier than the XF10, it’s hard to fault: a respected 24MP X-Trans CMOS sensor, a sharp, wide-aperture lens equivalent to 35mm, and a clever hybrid optical/electronic viewfinder are just the main highlights from a glittering spec sheet. Whether you’re shooting Raw or JPEGs, the results are filled with detail, while a collection of Film Simulation modes give you the option to treat images at once with a range of effects reminiscent of the company’s popular film emulsions. If you need 4K video then it’s probably best to hang on for the XF10, or look towards the company’s X-T20 or X-T2 mirrorless bodies, but for everything else the X100F is golden – particular for street and documentary work.

A stylish and capable compact with a clever multi-aspect sensor

Photographers had been waiting a long time for a follow-up to Panasonic's original LX100, released in 2014. Happily, when 2018 rolled around, the LX100 II did not disappoint. Though it's built around a 21MP Four Thirds sensor, the LX100 II cannily only uses a portion of this for image-taking (to a maximum of 17MP) allowing for easy switching of image aspect ratios on the fly – a task handily accomplished via the aspect dial on the lens. Elsewhere, you've got a solid metal body with tactile dial-led controls, a super-sharp optic on the front with a wide maximum aperture of f/1.7, and a huge selection of Panasonic's 4K video modes to play with. A magnificent camera four years in the making – and one that was every bit worth the wait!

A fantastic fixed-focal-length APS-C compact to rival the Fujifilm X100F, this impressive comeback kid from Ricoh was long-awaited by photographers of all disciplines. Its APS-C sensor delivers fantastic, crisp results whether shooting 24MP images or Full HD video, while the redesigned 28mm lens produces images that are sharp from corner to corner.

Any gripes? Well the battery life isn't the best, lasting only around 150 shots per charge, which really isn't enough for a camera released in 2019. The lack of 4K video is also a shame, so if this is something that bothers you then best look elsewhere. Ultimately though, as a pocketable prospect for stills shooters, the Ricoh GR III excels in all other categories.

The seventh model in the hugely successful RX100 series, the Sony RX100 VII continues the fine tradition of an absolutely staggering camera in a slightly sub-par handling experience. These cameras are great, there's absolutely no question of that, packing incredible functionality into a truly tiny package. The Mark VII version can manage a whopping 90fps in new short Single Burst shooting mode; that, frankly, is ridiculous. Images look amazing too, the zoom range is impressive and the 4K video looks great. It is, however, so small that it really does take some getting used to in terms of handling, and the price tag means that unless you're going to use all its amazing features, a cheaper option may suit you better. Worth including for those who simply have to have it all in a tiny package, but if that's not you then another choice on the list may be better for you.