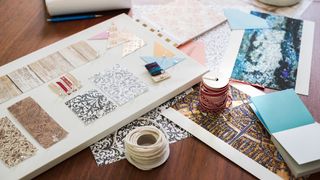 Learning how to create mood boards will transform your pitching experience. Mood boards communicate a designer's vision at the start of a project. They should be visually stunning collections of ideas, full of textures and images that paint a picture better than words alone. A mood board is the closest you can get to inviting someone to climb inside your creative mind.

It's crucial that your mood board is more than a confusing, messy collage. Instead, it should be a cohesive, beautiful expression of your vision. But how do you achieve this? We've put together a series of tips that'll let your inner creative genius sing by replicating your creativity on a fantastic mood board.

Have you got an awesome design portfolio to accompany your mood board at your next pitch? If you think it needs some work, we've got lots of portfolio examples to inspire you.

01. Look beyond the digital world

When putting together mood boards, it's easy (and therefore tempting) to just use images found online. But just because you're working on a digital product doesn't mean you have to stick to digital inspiration. Plus, you may be breaking copyright laws by using them.

For example, while working on the ITV news website, digital product design company Made by Many looked at copies of the veteran Picture Post magazine in order to express how powerful and effective an image plus a caption can be for telling a news story. Real world inspiration such as this can be a very powerful 'convincer' when putting together a board for a client.

Real-world inspiration is all around us. So use the camera on your phone to take pictures of everything you see that inspires you, whether that be a bird in flight, great use of typography on a sign, or the brickwork on a building. Or maybe it's just a little corner of your house.

They don't have to be great photos in the traditional sense – it's all about capturing thoughts, impressions, themes and feelings.

03. Curate what you include

When putting together mood boards, think of yourself as a curator rather than a collector, and try to introduce meaning and threads from one image to the next. It makes for easier interpretation.

From the outset, establish how you mood board is going to be presented, as this will determine how you go about it and how much or little detail to go into.

An 'offline' mood board will generally be looser in style and could still be presented online, with some explanation, while a completely online mood board should be tighter and will generally need to work harder to convey a theme or style. Think about how a person viewing your mood board solely via email would view it.

05. Build things up around a large image

Whether your mood board is electronic or physical, the layout needs to give prominence to key theme images. You can then surround these with smaller supporting images that enhance the theme.

It's a subliminal trick. When someone sees a large image on your board in their heads they'll have questions about it – and they'll quickly scan the rest of the board to find answers for those questions. If you place smaller supporting images around the larger image they should answer these questions by clarifying the messaging given in the larger one.

When making a physical mood board, don't be afraid to get, well, physical. Traditionally, mood boards are made from foam board. Although cutting this stuff up with a scalpel and spray mounting cut-out images onto it can be a pain (especially if you're not dexterous with a blade), it's extremely effective as a presentation tool. The tactile nature of cut-out images glued onto boards enhances the emotiveness of what's being explained.

It may seem like an old-fashioned thing to do, but perception-wise it's a real ace up your sleeve as a designer. Just be careful with your fingers on that blade...

07. Incorporate your board into your pitch

Generally mood boards are considered to be separate to pitch or presentation work: they stand alone to show mood and tone. This is standard practice, but consider instead making them part of your pitch or presentation. Remember, you're trying to use subliminal visual tricks to make a client 'get it'.

Mixing mood board elements in with the presentation – rather than bolting them on at the end – can be an effective way of communicating your concept to the client.

It's important to make sure that a well-meaning project manager doesn't email an offline mood board ahead of the presentation 'so the client knows what we're presenting'.

For an offline mood board, it's far better to let it all sink in to the client's mind as you showcase it, rather than come armed with lots of questions before you even start.

09. Present your own mood board

In a similar vein, if your mood board is being presented to the client, try to be involved yourself. It makes no sense to have something that originated in your head being communicated by someone else, because that way meaning can become muddled in a Chinese whispers-type mess.

Locking an idea or a style down in a mood board can be detrimental, as the client will feel shoehorned into going with a particular aesthetic. Keep everything a little loose and don't make everything look too final.

If you're using preview images from image libraries, don't worry about the watermarking on them – it all adds up to a 'hey look, we can change this, these are ideas' feel to the board.

When you're presenting a mood board, watch the faces of those you're showing it to. Ignore any verbal client 'oohs and ahhs' but instead watch their facial and emotive reactions as they look around the board. This will give you a much more honest take on whether the board is doing its job and if they're reacting well or badly to what you're showing them.

You have to put these people 'in your mood', so ignore their mutterings and watch their emotive reactions.

12. Hone your mood board skills

Employees at branding agency Landor Associates use a form of mood board to showcase themselves to other members of the team. Individuals put together nine images in a 3 x 3 grid to give their work colleagues an insight into what they're like; their interests, passions, cares and worries.

If you ever want to test out your mood boarding skills, try this out and showcase it to your colleagues.

Don't ignore the power of a few isolated words on a board. Well-chosen words can be fantastic show-stoppers and give your viewer pause for thought as they have to mentally read what's in front of them. Big, bold words juxtaposed together work very well at creating drama, tone and meaning for any project.

Obscure references can be fun, but try to have a number of relatable items or 'touchpoints' in your mood board. You want to let others in, so being deliberately obtuse will earn you no points at all. It's easy to fill out a board with a pile of incomprehensible references; it's much harder to be clear and use imagery to sell your vision. But it's worth the effort.

15. Aim to spark an emotional response

Think a little bit left of centre if you're presenting a mood board to a client. What would give them a genuine emotive response? Real world objects are good for this. If you were inspired by the beach, bring in a shell. If your eureka moment happened on the train, bring in the ticket. This type of thing intrigues people's brains and gains that all-important emotive reaction.

Expecting too much of the audience can be the difference between a successful mood board and one that's dismissed as being too cerebral. There's a danger of assuming they'll 'know what you mean' – chances are they won't. So if it takes a few more references, images or textures to get what's inside your head into a client's then add them in.

17. Test your mood board

Don't forget to test out your boards before you send them off. It's not a game of Pictionary, so if your testing audience have to ask too many times what an image means or why it's there, then it probably shouldn't be there.

The whole process of creating mood boards should be fun – a refreshing break from the often tedious tasks of the jobbing designer. If you're not having fun then it's a sure sign you're going about things the wrong way...

19. Use mood boards to brief designers

Following on from the previous point, mood boards are a good way to brief a creative. Don't be afraid to go into detail. The mood board above was compiled for animator Tom Baker as a mood and style guide for creating cartoon versions of The Avengers TV series characters. Instead of relying on one example of a character, several types were found in many different poses, which gave Baker a clear take on the style and direction of the piece.

'I'll know it when I see it' is a phrase that most of us are familiar with. But to hear this when finished artwork comes back from a client is gutting, signifying that it's back to square one. Using mood boards at different stages of the process can help you avoid this happening.