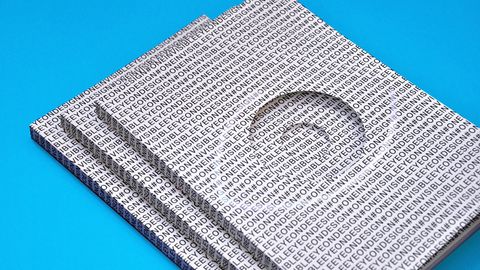 Serious minded and beautifully presented. An essential read for anyone interested in design.

Eschewing the current trend for oversized, format-busting grandeur, the debut issue of Eye on Design magazine arrives in a beautifully compact, sub-A4 format. From the (literally) eye-popping beauty of the inspired, die-cut cover, across the 160 pages of crystal clear layouts, to the brilliantly executed themes, this debut exudes quiet confidence and an air of self-assuredness.

Eye On Design is published by AIGA, the American Institute of Graphic Arts. The institute is the largest of its kind in America, and its website has become home to some of the very best industry insight and analysis since it launched in 2014.

Gender politics and technology live alongside grid theory and designer existentialism, with a gently liberal and enquiring take on the international design community. Without wielding an ideological axe, Eye on Design presents a varied collection of writers who question what designers think as much as what they do.

Issue one is themed around ideas of invisibility, promising to reveal “the code, data, and grids lurking behind our designed interfaces... intangible subjects like identity and mental health.”

Hidden agendas, concealed data and transparency in the information age couldn’t be more timely issues, but the editorial steers clear of manifestos. In Greetings From The Invisible Borderlands, Madeleine Morley investigates antiquated surveillance techniques, and their potential resurgence in a digital era. In Bauhaus Meets Binary, Liz Stinson re-visits the 1980s to show how an MIT research group turned code into design. And in Portfolio, Margaret Rhodes discusses the (invisible) presence of the computer and software as collaborator, with three artists demonstrating how process informs their work.

Delayed Gratification, meanwhile, is a welcome tribute to five women in the design industry who, as the ‘other half’ of famous design partnerships, have until now been overlooked in favour of their male collaborators. And a fun article, Resurrect The Rejects, invites designers to reveal work that wasn’t accepted, and asks them to explain why.

The crisp layouts are occasionally flung upside down and back-to-front, as if the magazine has been vigorously shaken then laid flat and allowed to settle. Weird anomalies enliven the minimal aesthetic, engage the eye and, crucially, suggest it was as fun to make as it is to read.

Type is mainly set at an unusually large point size, and whilst this friendly legibility is initially refreshing, the supersize body copy can hinder at times. Getting Rid of the Grid – a celebration of Josef Müller-Brockmann’s legendary Grid Systems in Graphic Design – can’t do his profoundly influential book justice with such a low word count spread over a mere five pages.

And closing the short feature with a criminally indulgent blank page – save a page number – rubs salt in the wound. When the editorial standard is this high, a few longer articles (i.e. regular sized body type) would be welcome.

However, complaints are as minor as they are subjective. More often than not, the layouts of Eye On Design deliver with relentless precision, and occasionally ambitious treatments hint at a more playful, off-grid direction for subsequent issues.

How Not To Be Seen (introduced as: “A fucking didactic educational .PDF file“) riffs off the work of satirical video artist and critic Hito Steerl, exploring ways to disappear in the age of surveillance with that Kim Kardashian cover variously pixellated, warped and redacted to play on Steerl’s original tips for invisibility in the modern age (“Be female and over 50”).

It’s fun, smart and a perfect example of editorial and design in perfect harmony. It’s also the sort of design that works better in print that on screen, and like the dreamily tactile cover, is a love letter to print design in its own right.

Mostly, the art department step back and let editorial rule. Mixed-media artist Nate Lewis’s ominous, self-vandalised photos are simply printed and unadorned, the better to consider their content. Elsewhere, a stand-out article by Meg Miller about the power (and loss) of sight, lets the words and a few carefully chosen photographs tell the fascinating story of iconic graphic designer Alvin Lustig and his wife, artist and designer Elaine Lustig Cohen.

With previous editorial experience at the likes of Interview, Art Forum, V Magazine and The Paris Review, founder editor Perrin Drumm is well qualified to tackle the near-impossible task of creating a literary design journal that reads brilliantly, without being earnest or dull, and looks fantastic without being too showy. (Are there any design critics more vicious than designers themselves?)

Her debut issue effortlessly plugs into the zeitgeist to deliver an ultra-cool reading of the hearts and minds of the design community. A subscription is obligatory for anyone interested in the deeper currents of contemporary design.

Issue one of Eye On Design is available from the Eye on Design website for $19, or you can save 20 per cent with an annual subscription.

Serious minded and beautifully presented. An essential read for anyone interested in design.