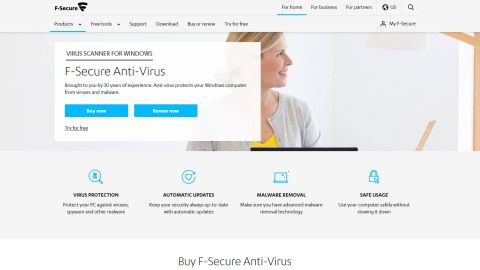 F-Secure Anti-Virus is devoid of bonus features, even lacking the essential URL blocking that its competition provides. However, the antivirus engine offers a fast, accurate, and precise solution, and at a price less than its competition.

F-Secure Anti-Virus is an affordable antivirus solution that's easy to use (particularly in combination with other security tools) and has earned a place in our roundup of the best antivirus software.

F-Secure Anti-Virus is notable for its low price of $35.99 (about £28) for the one-computer, single year license. At first glance it looks to offer an exceptionally good deal, but going over the feature list, we realized how really basic this package is.

Before we criticize it too much, we should point out that this same simplicity can be an advantage, especially for power users that plan to combine F-Secure with dedicated software to cover other needs, such as a URL filter, software firewall and other security software. However, more basic users, as well as those seeking the convenience of a single interface for multiple functions, the lack of features might be an issue.

Another downside is there are no multi-device discounts, extending beyond the three system, one-year license for $39.99 (about £31). Other antivirus solutions are more flexible; for those with multiple systems to protect, Bitdefender has flexible plans that cover one, three, five or up to 10 devices, for one, two or three years. This also is more affordable as well: a 10 PC, three-year Bitdefender license goes for only $162.50 (£125), which works out at a quite inexpensive $5.42 (£4.17) per device per year.

F-Secure offers a free 30-day trial of F-Secure Anti-Virus, but it's not easy to get. Before you can even download the installation file, you need to provide an email address and solve a CAPTCHA. You'll then receive a confirmation link via email, and after clicking on it, a web page opens to explain that still another email will arrive to provide both the license key and download link.

The next email arrived quickly, but lacked a license key (which we eventually realized was built into the executable name). Next, the software reported that the license was invalid, but that turned out to be an error, and then the installer proceeded to quickly do its thing without any further overtures. We are happy to report that the rest of the installation went without a hiccup, but that only left us wishing the rest of the process had been smoother.

Taking a look at the F-Secure program folder, we noted support files averaging 700MB in size. There was really nothing to be surprised about, but notably, F-Secure (as some others do) integrates the Bitdefender antivirus engine as well as its own. We have no problem with it, and even more so considering that the Bitdefender engine has a reputation for high accuracy, and it's reassuring to have dual antivirus engines.

Nobody could accuse F-Secure Anti-Virus of overdoing it in the bonus feature department, as it has hardly any. It’s simply the basics, with antivirus scanning and the required security layers and settings.

The advantage of this approach is that F-Secure's interface is as simple as they come, and even a complete beginner will have no trouble with it.

The main console distills down to just two buttons: Virus Scan and Settings. Hit the first and F-Secure Anti-Virus performs a super quick scan (taking under a minute), deals with any suspected threats and displays an update on the system’s health. The other button, Settings, has just minimal configuration options.

Power-users who prefer granular control will be disappointed by the lack of settings, because F-Secure offers few customizable options and always defaults to the quick scan, despite there being a full system scan buried deep in the settings menu.

F-Secure doesn't offer a removable drive scan, or any way to create a custom scan type. Competitors such as Avast and Avira cover these needs with options for manual scans and custom configuration settings, but F-Secure has a measly two checkboxes: 'Scan only known file types,' and 'Scan inside compressed files.'

However, F-Secure does offer one important extra tool: ransomware protection. For safety, it prevents untrusted applications from accessing files in designated folders. While this isn't a groundbreaking innovation (Windows 10's new 'controlled folder access' feature does pretty much the same thing), we appreciate the additional layer of protection.

At the end of the day, F-Secure excels at its core function, which is antivirus, notable for its quick speed, high accuracy and simplicity in use. It lacks in some other features, such as URL blocking, but these gaps can be filled with other, dedicated software. For users that are fine with multiple pieces of software, then F-Secure makes a fine choice for the antivirus part.

In our own malware tests, F-Secure Anti-Virus delivered a solid performance. To confirm this, we also examined results from leading antivirus testing labs for a comprehensive examination of the program’s strengths and weaknesses.

F-Secure ranked second place of the 18 solutions tested, but with 111 false positives. For comparison, Bitdefender (third place) had only two, and Kaspersky (fourth place) had just one.

AV-Test's August 2018 Windows Home User report showed even better results. F-Secure found and neutralized 100% of the test threats, with a lower number of false alarms. With 62 legitimate programs installed and activated, F-Secure blocked only a one, and gave an alarm about another. While not perfect, it was definitely quite liveable. For the rare situation when this does happen, users are given the choice to whitelist the blocked software, and then F-Secure will not banish it again.

Finally, we examined F-Secure’s impact on system performance. The PassMark Software November 2018 Security Products Performance Benchmark report gives an analysis looking at 15 of the top tier programs in the security area. F-Secure placed in the mid-range (eighth out of 14) suggesting that its impact on performance is perfectly average and acceptable. It's also worth noting that the testing was performed using the even higher tiered F-Secure Safe suite, and if anything F-Secure Anti-Virus is even more of a lightweight which will impact performance even less.

F-Secure Anti-Virus is devoid of bonus features, even lacking the essential URL blocking that its competition provides. However, the antivirus engine offers a fast, accurate, and precise solution, and at a price less than its competition.