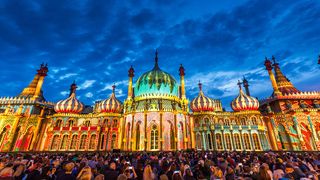 Not so long ago, video projection mapping (the art of projecting video onto surfaces such as buildings, to create the illusion of 3D art) was a fledgling art form, with just a handful of noteworthy examples. Now, a head-turning projection is par for the course for any music festival set, product launch, or show, though that doesn't make these displays any less spectacular.

Japanese art collective TeamLab used projection mapping technologies to craft a magical dream world in the Digital Art Museum in Odaiba, Tokyo. In it, different concepts and scenes flow together to form one ‘borderless’ world.

“Artworks move out of the rooms freely, form connections and relationships with people, communicate with other works, influence and sometimes intermingle with each other,” explains the exhibition’s description. Hosted in a vast, 10,000 square metre space, the installation is brought to life using 520 computers and 470 projectors.

To celebrate Argentina's bicentenary, there were huge parties across the country. In Buenos Aires, celebrations saw a massive projection onto one of the capital's most famous buildings, the Palacio Barolo, which is said to be created around the concept of Dante's Divine Comedy.

The projection mapping by Ula Ula Productions saw silhouettes of dancing figures projected onto the building, creating an atmospheric and mesmerising piece.

Tellart’s Terraform table enables users to ‘play God’. Located at London’s V&A Museum, projection mapping turns the giant sandpit into a rugged landscape, with mountains, valleys and lakes. Here’s the cool bit: thanks to a machine learning algorithm, the Table is able to read the height of the sand and respond to any changes. In short, this means you can dig a hole to form a lake, raise a hill to create a snowy peak, or smooth a river over to expand a forest.

The Table forms part of the V&A’s tech-focused The Future Starts Here exhibition (which runs until November 2018), and was created as a response to the question: Should we shape the Earth and other planets for human use?

Established in 1947 to provide a platform for the flowering of the human spirit in the aftermath of the Second World War, the Edinburgh International Festival celebrated its 70th anniversary in 2017. To mark the occasion, 59 Productions conceived an opening event that transformed the whole of St Andrew Square into a magical night garden. Buildings burst into life in a floral explosion of colour, texture and sound.

Rather than being a one-off event, Bloom ran for two nights at the start of the festival, from 10pm to midnight on a 20-minute loop, allowing the audience to enjoy the spectacle at their own pace.

The winner of both the Jury's Choice and People's Choice awards at the 2016 iMapp Bucharest competition, Interconnection transformed the Palace of Parliament in Bucharest, Romania, into a psychotropic exploration of the interconnectedness of all things, man.

Created by Limelight, this projection mapping project draws inspiration from contemporary visionary art and architecture, sacred geometry, physics and chemistry, and mixes them all up into a properly mind-altering five-minute trip.

In September 2015, the O2 joined forces with Projection Artworks to create the world's largest projection mapping project to celebrate the Rugby World Cup. Making use of 68 projectors and more than 122 moving head light fixtures, the project saw the roof of the venue transformed into the English rose emblem. According to the O2, the show could be seen from space.

Projection Artworks was also part of the team that created the world’s brightest projection mapping show in Easter 2015. Global design consultancy Just So collaborated with Projection Artworks to illuminate the windows of world-famous department store Harrods.

Conceived for Fabergé's Easter storefront display, the 360-degree mapped 3D installation was based on the company's pendent designs – which are 1/100th of the size of the 1.5m model – and incorporated an interactive touchscreen element to showcase the detail of the jewellery.

This video from Bot & Dolly and GMUNK was created without any special effects. As the performer engages with a morphing set, unfathomable shapes, graphics and animations are revealed. As the video continues, we're eventually shown that it is in fact, a robotic mechanism hidden behind every illusion.

Using their state-of-the-art robotic camera systems 'Iris' and 'Scout', the technique allows for millimetre precision of the robot arms.

Battersea Power Station invited Drive, a UK-based agency that specialises in projection mapping, to create an awe-inspiring visual experience to raise awareness for the iconic building's spectacular redevelopment. This is the result: 360,000 lumens of immersive visuals celebrating the building's past, present and future.

JR East celebrates the opening of the reconditioned Tokyo Station with a spectacular projection mapping experiment by NHK Enterprise. Brickwork peels away to reveal pistons; clockwork automata strum pilasters while trumpets and cymbals blow and crash from behind bays; at one point a route-map inscribes itself across the facade like a 150m long game of Snake.

This is a great projection, which is sympathetic not only to the architectonics of the building, but its function too.

Dr Blighty was a free production that became one of the highlights of the 2016 Brighton Festival, transforming the Brighton Pavilion, on England's south coast, into an Indian scene. Produced by Nutkhut and animated by motion design and projection mapping specialist NOVAK, it celebrated Brighton Pavilion's history as a WWI hospital for wounded Indian soldiers. A specially commissioned soundtrack rounded off the colourful event.

Not all projection mapping examples can be measured in metres. Sharp and Jenkins' Speed of Light film bills itself as the worlds smallest all action police chase. Using hand-held micro projectors with an iPhone video source, Tom Jenkins and Simon Sharp create a dynamic and witty chase that plays out across the surfaces of their own office, and proves that size isn't everything.

Light Harvest assembled a whole team of artists for this unusual mapping for Manhattan Bridge. The animation makes great use of the facade of the bridge but where it really shines is in the tunnels underneath. The entire curved ceiling becomes animated, and when entering the tunnel, the audience becomes immersed in the projection.

Using two walls, a treadmill, and some nifty projection, director Filip Sterckx creates a virtual world for the musician Willow's music video. As with most projection mapping projects, it's the technique that charms here.

Singer Pieter-Jan Van Den Troost gropes at doors that aren't really there, trots on the spot down imaginary stairs, and kneels pretending to be paddling in the sea. It's all surprisingly lo-tech, and all the better for it.

Jørn Utzon's inspiration for Sydney Opera House's iconic shell roof is brought to life in this work by Urban Screen. The roofs appear as fabric ship sails, undulating in the wind. The distinctive chevron tiles – a labour of love for Utzon – pulse, fold, and rupture to reveal the rich interiors.

All of Urban Screen's projections are worth watching, particularly Tag und Nacht for its clever interplay between in the interior and exterior, and the seminal 555 Kubik.

Xavier Chaissaing's super low budget film demonstrated what an inventive artist can achieve with limited resources. The film was shot with a DSLR and a motion control rig made by the artist himself.

Its innovative mix of stop motion footage and live camera projection is particularly bewitching in the scenes where the projection is viewed through the translucent petals of a flower.

One of the few permanent installations in this list, Omicron can be seen at the Hala Stulecia museum of Architecture in Wroclaw, Poland.

Romain Tardy's minimalist aesthetic takes its inspiration from the period in which the dome was built and does an incredible job of highlighting its structural qualities, making the heavy concrete construction light and dynamic. The making-of video is interesting, too.

Gaudi's plans for a polychrome facade on the Sagrada Familia have been realised, albeit only for 15 minutes. Moment Factory combined video projection, gobos, sharp beam lights projecting beams into the sky, and lighting from the interior to create a spectacle it describes as a, "living fresco made of colour, light and sound".

To work with the complex geometry of the cathedral, a 3D scan was used to help map and light a show that works with the host architecture in brilliant symbiosis.