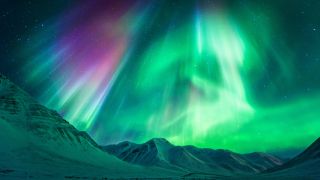 Alaska is famous for the Northern Lights, and a favoured destination for anyone looking for the aurora borealis in North America. However, Alaska is wild. It’s remote. It’s hard to get to. And it's hard to get around – especially in winter.

Weather can be unpredictable, and transport too, so make sure you have travel insurance for all trips you book during the winter in Alaska. Although you can rent a car, conditions are best described as extreme, and many companies do not allow their vehicles to be driven to the far north; check the conditions before signing any rental agreement. It’s also very cold in winter (as low as -30°F/-34°C).

So should you visit Alaska to see the Northern Lights? Alaska is often visited on cruises, though unless you’re going at the end of the cruise season, around September (when Northern Lights season kicks-off), you’re probably not going to see them from the water.

So wrap up well, be prepared to get up in the middle of the night, and get yourself to northern inland Alaska in September or March. That’s when the aurora can be at their strongest, but means you'll miss the extreme conditions of midwinter. You'll also get a better chance to see wildlife.

Make sure you avoid full moon, too – plus a week either side. And plan to be in Alaska for a week or two, if you really want a decent chance of seeing the Northern Lights. Here’s where to go.

The easiest place in Alaska to see the Northern Lights

Situated at 64° N about 180 miles south of the Arctic Circle, the Northern Lights are common in Fairbanks, though less so than in Alaska’s far north. A former gold rush boomtown, Fairbanks may not be the absolute best place in Alaska to see aurora frequently, but it’s so easy to get here by plane, and there are dozens of places to stay.

Good observations spots nearby include Cleary Summit, Chena Lakes Recreation Area (see below), Haystack Mountain, Ester, Wickersham and Murphy Domes. You can get to some of those places on guided tours at night operated by local companies, or rent a 4x4.

Alaska Airlines fly from Anchorage, which is by far the easiest way of getting to Fairbanks. However, you can also get there by train; the Alaska Railroad operates its Aurora Winter Trains on weekends. It travels north from Anchorage for 12 hours on Saturday and returns on Sunday. It also operates during mid-week in December, January, February and March. The drive from Anchorage to Fairbanks takes about seven hours.

Budget Alaska hotel: Moose Lodge - $106/£85 per night
239 Snowy Owl Lane, Fairbanks, AK 99712, USA
Moose Lodge – approx £85 per night – is all about location. In classic wood cabin-style, this simple hostel has a homely feel and private kitchen facilities. Situated northeast of the town, its dark skies will give you a better chance to see and photograph aurora. See deals and reviews for Moose Lodge at Booking.comView Deal

This winter wonderland is a popular place to hunt for aurora

Close to Fairbanks
Wilderness area
Not much accommodation

Out in the wilderness but spitting distance from Fairbanks, Chena Lake Recreation Area is a popular place to come looking for the Northern Lights. A common tactic is to drive round the lake to the jetty, park your car, and view the Northern Lights from the lake shore. By day you can rent ice-fishing houses and fish for Rainbow Trout, Silver Salmon, and Arctic Char through pre-drilled ice holes. There are also cross-country ski trails here.

Chena Lakes is only 55 miles east of Fairbanks. It can be driven in 30 minutes, though the only accommodation option near the lake – Chena Hot Springs Resort – runs a shuttle from Fairbanks International Airport.

If you want to find somewhere beautiful to photograph the Northern Lights, consider Denali National Park. Although it's some distance south of Fairbanks, this wilderness of six million acres is northerly enough for the Northern Lights to be spotted (though it’s not a nightly occurrence). However, the lodges on the outskirts of this national park are well set up for aurora viewing, and many of them will ring an alarm or arrange a wake-up call when the aurora do appear. Most easily reached by train, Denali National Park is home to sheep, grizzly bear, caribou, moose and the tallest mountain in North America, Mt. Denali. That’s one for the backdrop to your aurora photos. This area is best visited in September, when the aurora season has started, but the extreme conditions have not set-in.

You can get here by train; it’s an eight-hour journey north from Anchorage, and only four hours south of Fairbanks. It is possible to drive here, and it's easy to rent a car at Anchorage Airport, though most people do take the train (most hotels here offer shuttle services between the railway station, the visitor centre, and the hotels). You cannot drive your car very far into the national park, so again, shuttle buses take most people in and out. There is no airport at Denali National Park.

Mid-range Alaska hotel: Denali Lake View Inn
$141.51/£112 per night
1.2 Otto Lake Road, Healy, AK 99743, USA
Denali Lake View Inn is a hotel in the Canyon area north of the Park entrance close to shops and restaurants. All rooms have balconies with views, so you may be able to nip out at night to catch the aurora without having to exit the hotel. They also have hot tubs. See deals and reviews for Denali Lake View Inn on Booking.comView Deal

Luxury Alaska hotel: North Face Lodge, $640/£478 per person per night (minimum stay three nights)
Denali National Park and Preserve, AK 99755-0067
North Face Lodge is perfectly placed for photographers after the Northern Lights in a wilderness setting. In the tundra meadow of the Moose Creek Valley, this three-night minimum lodge with 15 rooms has views of eight peaks of the Alaska range. See reviews for North Face Lodge on TripAdvisorView Deal

Here at almost 68° N is the beginning of a vast Arctic tundra landscape. It’s wild, so wild, that to get here and immerse yourself in the wilderness is an expensive affair. Protecting the Brooks Range, the Gates of the Arctic National Park is the northernmost national park in the US, situated entirely north of the Arctic Circle. Coldfoot is the point of entry, either by plane to its small airport, or by road up the Dalton Highway.

The ex-mining camp of Coldfoot is very often reached by air as part of a luxury wilderness package that involves a stay at either Coldfoot Camp or Iniakuk Wilderness Lodge. Some packages will put you in a van to drive up the Dalton Highway to Coldfoot; it takes about six hours from Fairbanks. Coldfoot is 250 miles north of Fairbanks, and 60 miles above the Arctic Circle.

Mid-range Alaska hotel: Coldfoot Camp - $219/£190
81512 Milepost 175 Dalton Highway, Fairbanks, AK 99708
Coldfoot Camp is a great place from which to explore the Brooks Range wilderness. Near the Dalton Highway and Coldfoot Airport, the camp is often visited specifically for aurora viewing, as well as for dog mushing adventures and backcountry snowshoe tours with a local guide. Accommodation at Coldfoot Camp is no-frills. See reviews for Coldfoot Camp on TripAdvisor

Luxury Alaska hotel: Iniakuk Wilderness Lodge - $2,527/£1,995 per person per night
1785 Iniakuk Ave, Fairbanks, AK 99709-6557
Iniakuk Wilderness Lodge is a remote and exclusive wilderness lodge at the north end of Iniakuk Lake in the Brooks Range. It offers dog sledding and snowshoeing experiences. It’s an expensive, all-inclusive, multi-day, fly-in affair, and you can choose to stay either near the main hall, or in remote lodges within the Gates of the Arctic National Park. An all-inclusive Aurora Luxury and Dog Mushing adventure costs £1,196 per person per night, while a Gates of the Arctic National Park dog mushing expedition for five days and nights costs £9,141 per person. See reviews for Iniakuk Wilderness Lodge on TripAdvisor

Ever wondered where the Ice Road Truckers are going? The answer is Prudhoe Bay (also called Sagavanirktok), a region on the coast of the Arctic Ocean that’s also the centre of the Alaskan oil industry. The main town, Deadhorse, is home to around 2,000 people – mostly transient oil workers – and the town is more industrial work camp than tourist destination. There are only a few (trucker accommodation) places to stay in Deadhorse – the Prudhoe Bay Hotel and The Aurora Hotel – though access is restricted to oilfield workers and tour groups with special permits.

Getting to Deadhorse on the edge of Prudhoe Bay Oilfield is not easy. If you do want to come here, call one of the hotels listed below (or the Fairbanks Convention & Visitors Bureau) and they will advise you. Some Fairbanks-based tour companies often bus tours north to Coldfoot and Deadhorse, or fly drive combination tours. Deadhorse lies at the end of Alaska's famous Dalton Highway, Alaska's most remote and challenging road and a 414-mile journey from Fairbanks. By far the easiest way to get here is by air; Alaska Airlines and Frontier Aviation offer daily services to Deadhorse from Fairbanks. However, if you just want to see the Northern Lights from somewhere beautiful, go elsewhere.

Budget Alaska hotel: Prudhoe Bay Hotel - $116/£92 per night
Pouch 340004, Prudhoe Bay, Alaska
Prudhoe Bay Hotel is within walking distance of Deadhorse Airport. It's a down-to-earth affair with straightforward rooms, a restaurant, gift shop, public Internet access, and an ATM. However, it has got some other interesting photographic opportunities other than aurora; the area around the hotel offers some excellent wildlife (including bears, polar bears and Arctic foxes) and migratory waterfowl viewing. See reviews for Prudhoe Bay Hotel on TripAdvisor

Barrow is at the extreme northern edge of Alaska, and is a much more beautiful place than Prudhoe Bay. About 330 miles north of the Arctic Circle, Barrow (also called Utqiagvik) is the most northerly settlement in the US; only the adventurous make it this far. However, there is a good reason for making Barrow your destination of choice when looking for the Northern Lights, and that's because of its traditional Alaskan culture. As well as being able to see the aurora over the ocean from here, you will be able to explore the local Iñupiat Eskimo culture, and visit the Inupiat Heritage Center to learn more about bowhead whale-hunting and dog-sledding. They still harvest 24 whales a year here.

The only option for getting to Barrow is by plane, and it can be expensive. Alaska Airlines fly to Barrow from both Fairbanks and Anchorage, as do charter flight companies including Era Alaska or Arctic Air, though most people who visit Barrow do so via a tour company such as Tundra Tours or the Northern Alaska Tour Company, whose package prices normally include a flight.

Budget Alaska hotel: Latitude 71 BnB - $169/£133
5725 B Ave., Ukpiagvik, AK 99723
Latitude 71 BnB is a spacious bed and breakfast with a cosy, comfortable homestyle feel. There are a range of different rooms and suites, along with guest lounges. See reviews for Latitude 71 BnB on TripAdvisor

Mid-range Alaska hotel: Top of the World Hotel - $184/£145
3060 Eben Hopson St, Ukpiagvik, AK 99723-0189
Top of the World Hotel is a Scandinavian-style hotel owned by indigenous in Iñupiat Eskimos, and overlooks the Arctic Ocean just beside Barrow's famous Whale Bone Arch, which makes for an excellent foreground subject in any photo of the Northern Lights. The hotel has 70 rooms all with free Wi-Fi, with a restaurant and fitness centre also on site. See reviews for Top of the World on TripAdvisor